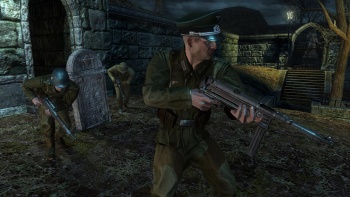 A multiplayer build of the upcoming shooter Wolfenstein has been leaked online and id Software has promised to rain down death and destruction – or at least a forum ban – on anyone who admits to having it.

A message posted on the Wolfenstein forum by Community Manager Peter Sokal revealed that a multiplayer build of Wolfenstein had been leaked on July 31 and was being distributed online. He advised gamers to stay away from the pre-release build or, at the very least, to keep their mouths shut about it, saying that anyone who publicly acknowledges having it will be immediately banned.

“I must warn anyone involved that Activision’s legal department is taking this matter very seriously,” Sokal wrote. “Same applies here on the forums. If you mention that you have acquired this build, you are openly admitting to illegally obtaining the build and will be banned straight away. You have been warned.”

“With regards to any footage, screenshots and comments posted here and all over the internet, an important thing to keep in mind is that these were not created from a build of the game that was final or consumer ready,” he continued. “There’s nothing we can do about it now except continue working on the game.”

Wolfenstein is scheduled for release on August 18 for the PC, Xbox 360 and PlayStation 3.

Activision CEO Says He Would Raise Prices Even Higher