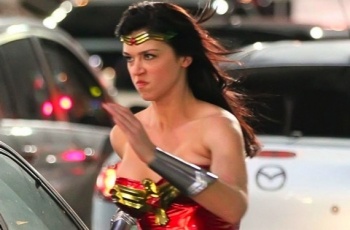 A failed TV pilot doesn’t sting quite so much if it leaves you free to take on movie roles.

Adrianne Palacki, who was starred in the recent ill-fated Wonder Woman pilot is the latest addition to the cast of the sequel to GI Joe: Rise of the Cobra, as military intelligence specialist Lady Jaye. Palacki will join returning cast members Channing Tatum and Ray Park, as well as Dwayne “The Rock” Johnson, French actress Elodie Yung, and hip-hop artist RZA.

Lady Jaye is supposedly a talented spy, highly skilled in the art of disguise. She is able to mimic even the smallest details about a person, even down to subtle inflections in their voice and the look in their eye, although exactly how much screen time her particular talents will get in a two-hour action movie is anyone’s guess. Fortunately, she’s also a dab hand with a crossbow, so she will still have something to do if – although I’m guessing “when” is closer to the mark – her cover gets blown.

There is also some discussion about who will play the team’s namesake in the movie: Joseph Colton, the original GI Joe. A number of actors are apparently in the running, with Bruce Willis’ name being one of the most prominent.
Paramount is reportedly eager to start production in order however, so availability might be just as important as talent.

GI Joe 2 is being directed by John Chu, who also directed the Justin Bieber movie, and is scheduled for release in the summer of next year.