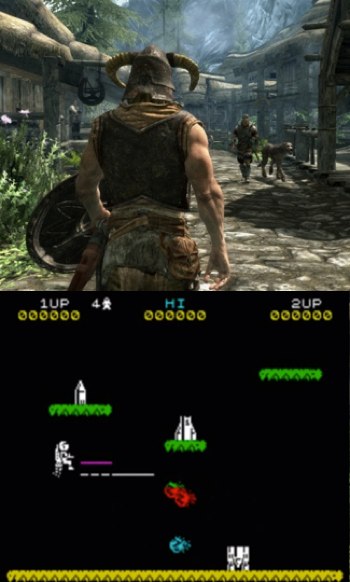 Skyrim wins big as the awards set a new record for voter participation.

As the longest-running annual gaming awards series – and the oldest gaming honors voted on by the general public – the Golden Joystick Awards have a long and storied history. This year marks the event’s 30th anniversary, and the winners include… well… pretty much the games you’d expect to win. With more than 4 million votes tallied, which doubles last year’s record, it’s hard to argue with these results.

Some of the more interesting honorees include Minecraft for Game Most Similar to Cocaine Addiction and Slender for Game Most Likely to Make You Change Your Pants. Ok, I made those up. Check out the full list of the real winners below.

For a bit of perspective on just how far we’ve come in the past 30 years, take a look at the image above. On the bottom is the very first Golden Joystick Game of the Year winner, Jetpac for the ZX Spectrum and VIC-20 home computers, and on the top is Skyrim, this year’s overall top dog.

Assassin’s Creed III Rap Gives the British a Beat (Down)