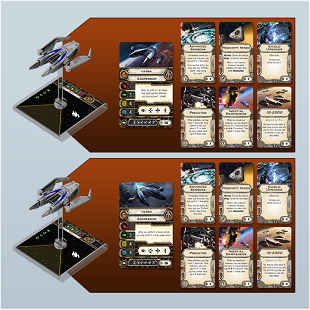 Fantasy Flight has released new mock squadron lists showcasing how players might use the new skills and pilots of the Scum and Villainy faction.

Back in August 2014, Fantasy Flight Games revealed plans to add a third faction to its popular X-Wing Miniatures Game. Made up of bounty hunters and criminals, the aim of the Scum and Villainy faction was to provide some thematic and tactical variety for fans who might have grown tired of the standard of the Rebels and the Empire. Hoping to shed further light on the faction, Fantasy Flight released a rundown today showcasing some of the ways players might use the new units to shake up the game.

According to said posting, playing as Scum and Villainy will give players access to a smorgasbord of “dirty tricks, highly illegal technology, unpredictable maneuvers, and some of the finest and wildest starships that money can buy.” It’s the company’s hope that this will lead “to an increased diversity among the squads available to X-Wing players.” The company provided two mock squadrons to demonstrate exactly what it means.

The first, a two-ship list based around the IG-2000, made up for its small numbers by leveraging the its networking powers and IG-88’s range of abilities “to do things that other pilots can only dream about.” The second squadron meanwhile, was designed to demonstrate how fighters already familiar to the game can be played differently with the Scum and Villainy faction. Using the Torkil Mux’s abilities to keep pilot skill values low, it gives several of its units opportunities to “maneuver early and block enemy flight paths.” It then employs a “liberal use of Dead Man’s Switches” to force the enemy player “into some truly difficult decisions” that Scum players can turn to their advantage. The company stressed however, that a list like this would require “a bit of finesse” as the aforementioned Dead Man’s Switch would limit the player’s ability to fly in formation like a Rebel squadron might.

Just judging from Fantasy Flight’s demonstration, it certainly looks like X-Wing fans will be in for a treat next month when the Scum and Villainy line finally lands at retailers. To get a look at the full text of today’s rundown, head over to the official Fantasy Flight website.