Developed by Good-Feel. Published by Nintendo. Released on October 16, 2015 (US). Available on Wii U. Review copy provided by publisher.

I quite liked Yoshi’s Story. It stands out as one of the highlights of the 64-bit platformer era for me, a relatively demanding game with interesting mechanics. Sure, it had its quirks, like an annoying time limit and a demand that you hunt for unique collectables in each stage, but those didn’t hold me up. So, I had a predisposition to like Yoshi’s Woolly World, and Nintendo delivered. It’s a game chock full of interesting little one-off mechanics, and while it drags at times or feels underdeveloped, it ultimately delivers a mellow experience that you’ll treasure warmly by the end of your play. 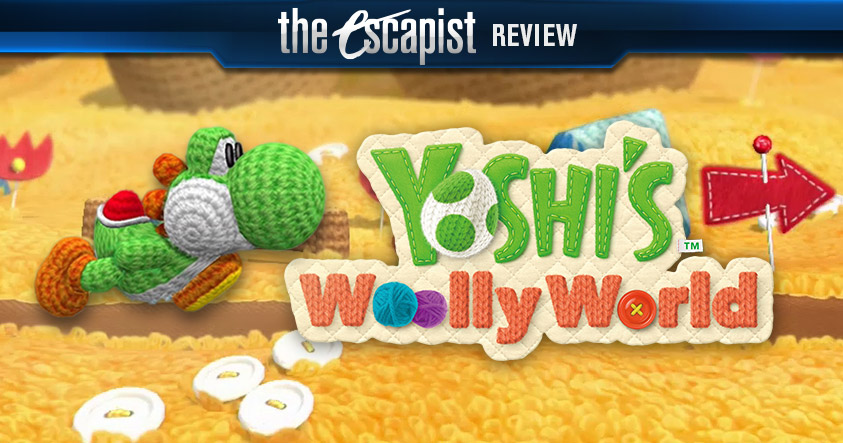 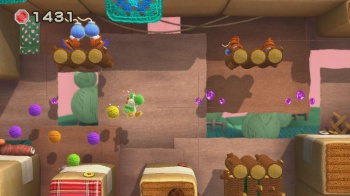 Woolly World has the threadbare cutscene-driven plot that most Nintendo platformers have. The evil flying koopa wizard Kamek has turned craft island’s many and varied Yoshis into skeins of yarn for some nefarious purpose, and the two untouched survivors have to journey out and hunt down the bits and pieces of their friends, stop Kamek, and generally Save Everything From Evil. You’ll see Kamek again before every boss, where it’ll take a moment to berate you with pun-laden bad guy speeches. Also, you’ll collect lots of flowers and buttons. Because why not.

I was down and out with a cold while I played Woolly World, and I’m going to be honest with you: It was perfect. I’m now recovering, and to be honest it’s quite possible that this game wouldn’t have been as good if I’d been at the absolute top of my game, but that’s not very important, is it? It’s a very calming game, with simple mechanics, occasionally challenging puzzles, and varied platforming segments. Enemies aren’t too much of a threat, in the Mario vein, but do provide a tough spot or two. If you’re not familiar with the mechanics of a Yoshi’s game, they’re standard fare. You jump, can hover a bit while you do so, and eat enemies with your big tongue. When eaten, you can spit out an enemy as a projectile or swallow it to turn it into a yarn ball. Yarn balls can be thrown to construct unfinished patterns and scaffolds about each map, knock down treasures hanging in midair, and defeat enemies. Some enemies are a bit tougher, requiring you to first hit them with a yarn ball and then either eat them, jump on their heads, or ground pound them. That’s about it.

Much of the appeal of Woolly World comes from its overwhelmingly twee aesthetics. It is profoundly sentimental and precious, tapping into a well of creativity by making full use of every single thing you might associate with the art and craft of knitting. Instead of coins or fruit, you collect beads. The levels are bedecked with snowy sequins, leathery deserts, cotton batting clouds, and knitted pipes. Vines for climbing are rolled out from rotating spools on racks. Shy-Guys made from stacked yarn wield crochet hooks to pick you apart with, or walk on stilts of knitting needles with footsteps of attached clothes pins. Flowing streams of yarn bend and twist around Yoshi as you walk through them. In a few very inspired moments, more obscure tools like skein or bobbin winders show up, causing me to laugh until I coughed. The game itself puts you in a crafter’s spirit by scattering five collectible yarn skeins around each level, and by gathering each of them you unlock a new Yoshi skin to play as, and there’s some 50 of them in the game (each of which is further customizable with a few color palettes using a Yarn Yoshi amiibo, where you could store that pallette and take it to a friend’s console to use your favorite skin.) 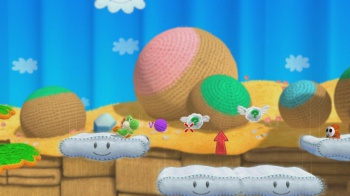 With all that visual creativity, it can be a bit disappointing that the game’s many and varied mechanics make short-lived appearances. Two or three levels each world will have a gimmick mechanic: Rotating felt pads with arrows on them that travel in the direction they’re pointing when you land on them. Mazes of pipes that change destination as you unwind parts of them. Sliding curtains that move along a rod when you grasp them, only to fall off the end like a Donkey Kong minecart. Those mechanics are just that: Gimmicks. They’ll appear once, then they’re gone. Unlike a more sophisticated platformer that introduces a new tool then lets you perfect its use, you’ll use them for a few puzzles, maybe two stages, and then never again. It can be a bit disappointing when you run through a really cool level, then realize that you won’t see its like again… ever.

The worst offenders there are the stage segments where Yoshi reknits into a different body to tackle a unique segment. You’ll become a floating umbrella, a flying plane, a motorcycle, or even a mermaid. They’re really neat, showcasing a mechanic that often moves at a different pace than the main game – faster or more sedate, depending. Yoshi will have completely different methods of attack and defense, even going so far as to be completely helpless against enemies as an umbrella. These unique bits really break up the gameplay, but they only show up once each, and it feels like a real shame that they’re not sprinkled into stages more liberally.

The game itself will probably take you about 10 hours if you hammer through it alone, 15 if you’re an average to below average platformer player. Bringing along a friend for co-op is a lot of fun, but some levels clearly weren’t first designed with co-op in mind, so beware that occasionally it’ll be easier to just eat your partner and carry them through a tight spot. The game’s difficulty curve is both shallow and smooth, not ever getting too tough at any point – though perfecting each level by getting every collectible can take some time and gives you a lot of chances to lose out and have to start over. The bosses in particular I found slightly disappointing – they’re really, really easy once you figure out the gimmick for each one. I beat each boss, save one, without dying.

All of that said, Yoshi’s Woolly World does its job remarkably well. It’s a calm, fun little platformer with a unique aesthetic and a wonderful hook. I said above that it’s mellow, and that’s the best way I can describe it. Sometimes games don’t need to be hard, don’t need to punish or impress, sometimes they just need to delight and amaze you.

Recommendation: If you’re in the mood for some N64 era platforming held to modern standards, or have a bad-at-platformers partner to tag along, Woolly World is just what the doctor ordered.