You hear about that 47 boy? Seems he’s gotten himself into a mess of trouble again. Who’d have imagined it? After all, he’s always been such a good, upright boy, never gave cause for injury, never any hassle. But where are my manners? Sit yourself down on this here rocking chair, Angela’s made some lemonade.

It’s been in all the papers. What a shame. Dear me, what a shame. You know that 47 boy, he was always so nice and charming when he came by the house-and such an impeccable dresser! You know my granddaddy always said you could tell a man by the cut of his clothes and the gloss on his shoes, but I suppose my granddaddy was wrong.

They say it was a Facebook app, you understand; a Facebook app where you could make a little movie about assassinating your friends, if they agreed to it. Now that sounds a little distasteful in my estimation, but I’m not one to judge-what two friends do on Facebook is their own private business, that’s my thoughts on the matter-but they say it included these personal insults, you know, to identify the person, saying they had a big nose or awful makeup, a small bust or a tiny pe… well, I don’t know all, and we’re better off not repeating it anyway. Let’s just say it was personal and anatomical and leave it at that. Now nobody asked for my opinion, but I think the whole scheme was ill-advised. I mean, say you got one of these requests but didn’t want to participate? Turning down a personal request like that, well, that’s a little bit of a slight in itself. Sure it’d just be a chuckle in the right crowd, but seems to me there’s a grave peril that the thing might be misused by dishonorable parties. Well, anyway they’ve pulled it now, within just a few hours of release, and I shan’t talk about something I was never able to see with my own eyes.

Mind you everyone’s already talking about it. That Mr. John Walker down at Rock Paper Shotgun? He broke the news to everyone. Called it “cyber-bullying,” which I suppose it is, and mentioned that making death threats online is illegal. Now I’m no magistrate but that doesn’t seem like it would hold water before a judge-I suppose he said it in jest. Mr. Hendriks at BioWare, he wondered how anyone thought it was a good idea in the first place, which is fair. Mr. Vella of Capybara Games, you know him-yes you do, he’s one of those indie boys, made that fine pixel art game Superbrothers: Sword & Sworcery – he said it all had to be made up, that there was no way something like that gets approved and made public. Ms. Leigh Alexander, well, she said a lot of things-and every one of them true-but it’s probably best you just hear her out yourself.

More lemonade? Angela, would you be a dear and make us a fresh pitcher? It’s powerful hot out today. She’s been so sweet to me since I’ve been laid up with this leg.

My yes, I do remember that 47 boy. Why must’ve been back in the Summer of ’02 we spent many hours together. Great stories from that time, great stories. I ever tell you that one about the Fugu fish? 47, he snuck into this gangster’s kitchen and poisoned his guts by improperly preparing blowfish sushi. In and out like he was never there. Now that’s a clever bit of design! That was back in the Eidos days, when 47 was advertised for his intelligence rather than his connection to ladies in unsavory clerical vestments. But let’s not talk about golden summers long past, it’s liable to bring on the melancholy.

Mind you, even then there were signs. Back in ’02 young 47 got in hot water for portraying a Sikh holy site as a den of terrorists linked to Afghanistan. That was shortsighted, to say the least, especially after so many Sikhs were facing prejudice from ignorant people after September 11th. Then of course there was the blowup of ’05, when his magazine ads showed dead women, one in frilly skivvies and the other in the bath, near naked as the day she was born.

Then, of course, you remember that affair earlier this year with the young ladies in the penguin outfits. Some called it misogynist and others said it was an excuse to show 47 beating indecently-dressed women-I suppose I can get on board with those arguments-Ms. Pinchefsky down at Forbes even talked to a real, ah, former artistic burlesque performer who said even dancing girls wouldn’t be caught dead in that getup. For my part, though, the whole thing just left me confused. The 47 I saw in that trailer, he didn’t seem like the fellow I knew all those years ago. The man I knew prized professionalism and modesty above all things, and he eschewed any form of flamboyance. Not only do these scandalously-dead women make me uncomfortable, they just don’t seem like 47, who never glanced at a woman’s décolletage in the whole time I knew him. 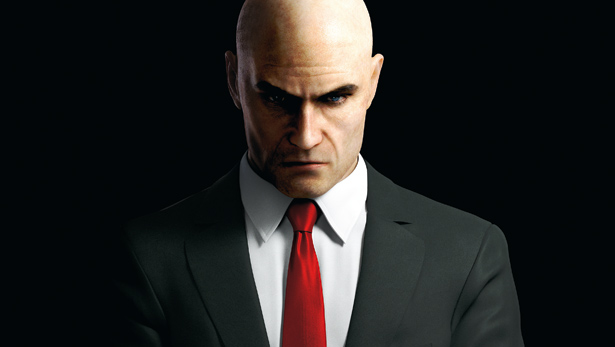 Not that I’m implying anything, understand. But that 47 boy’s always been about the job and only the job-struggling with his purpose, trying to align it with his principles, or using it to protect innocents. Amorous inclinations don’t come into the picture.

Ah, thank you Angela. Can I refill your glass? Please, have another libation if you wish.

I blame the parent company, that’s who I blame. That Square Enix was nice to take 47 in when he needed help, but they didn’t raise him right. After all, look what they did to poor Ms. Croft this year, announcing at a press event that the scavengers would try to rape her, in her next game. Well, turns out that doesn’t really happen in the game-a scavenger gropes her and gets a knee in the family jewels, and that’s the grand extent of it-but it just goes to show how disconnected advertising and PR agents have become from the people they represent. After all, they don’t need to give us Catholic damsels in leather or scandalous story announcements, do they? We’ve known Ms. Croft and Mr. 47 since they were knee-high, they’re fine folks, show us something great about their new games and we’ll gladly join the adventure. These repeated stunts are naught but self-injury.

Because the fact is this is a small place, friend, and people talk. Oh, how they talk. Our little community is full of gossips who will take any mistake Mr. 47 or Ms. Croft make and run it up the flag pole. They’ll take it shop-to-shop, from Rock Paper Shotgun, to Kotaku, to the Penny Arcade Report, and run it out into the streets. Soon, everyone in town is atwitter, going tut tut and I never and shaking their manicured fingers-as anyone would, in a proper society. These gossips hunger for scandal, as gossips often do. (Unlike upright people like you and I, who have erudite conversations like this one.) But as these scandals mount, I’ve begun to believe in my heart of hearts that they are intentional, and that marketers are playing on these gossip networks because they’re afraid to let that 47 boy stand on his own two feet.

Can you honestly watch those lewd nuns with blood running from their nostrils and believe no one raised an issue with it before launch? I can’t believe it, and I don’t believe it-just like I can’t believe Square Enix was surprised at the reaction to its new Facebook app. Companies don’t spend that much money developing advertising without approving and reviewing it at an early stage, just like how no one in the history of spoken language has unintentionally uttered the word “rape” when they meant something else. It’s not accidental, it’s provocation.

It’s also bad business. Sure, our little town is crowded with sensation right now, what with Mr. Conner taking over from Mr. Auditore and Lieutenant Commander Mason’s adventures abroad, but being shocking in the short term is liable to make you lose more than you gain. Yes, the gossips are talking about that 47 boy again, even after the lackluster release of Absolution (which is no mean feat), but they forget that gossips have long memories, and that this app is only the latest in a line of public outrages that are beginning to define 47’s image. That kind of advertising doesn’t draw attention to the game, it draws attention to other advertising. It’s based on a grave misunderstanding of human nature: Just because you’re on everyone’s lips doesn’t mean you’re in their hearts as well, and it certainly doesn’t mean you’re in their pocketbooks.

But enough talk about sad things. Would you like another lemonade, or would you prefer something stronger?

Oh, and have you heard about that article in the New Statesman? It’s lovely, you’ll be outraged. You know what I heard, from Brendon Keogh …

Augustus Deacon “Pappy” Rath is a gentleman of leisure living in a small town outside Savannah, Georgia. He is an alderman and deacon in the Methodist Church, and contrary to slanderous rumors, his comfortable family estate was built through wise investments–not as a rumrunner during prohibition. His casual pursuits involve the local bridge club, whiskey tasting, Freemasons, and commenting on controversial issues involving interactive technology. He is currently seeking a donor for his third liver transplant. If interested, please contact his great-grandnephew Robert Rath at www.robwritespulp.com or on Twitter @RobWritesPulp .