Archenemy is a new way to play Magic The Gathering with your friends. Instead of the one-on-one duels that were the hallmark of the game (the XBLA game is called Duels of the Planeswalkers for the love of Pete), Archenemy makes one player uber-powerful so that he can take on two, three or even four other players. In fact, the rules do not limit the number of adversaries at all. In this way, if you have a bunch of guys (or girls) who want to play Magic, you have a way for everyone to be engaged together instead of splintering into separate corners of the room to duel it out. For me, it was a great way to reacquaint myself with the collectible card game as well as introduce some people in The Escapist office to the wonders of Magic.

I first started playing Magic the Gathering back in the proverbial day. It was 1993 and here was this game that was the perfect meld of the fantasy roleplaying tropes that I loved (elves, goblins, wizards, etc.) with easy gameplay that even my non-nerd friends could enjoy. I played for a year or two, but then my time was absorbed by high school drama club productions and, dare I say, girls. I sold my cards in the summer of 1995 to a buddy for a cool $200. He was happy to have them for there were more than a few rare artifacts in amongst the chaff of Grizzly Bears and basic lands. After I cashed out, I didn’t really think about Magic for more than a decade.

The first time Magic reentered my life was during Gen Con 2009. I had been to the previous year’s Gen Con but had limited my wanderings to the show floor and gaming nigh-on incessantly. The next year though, I had a little bit more free time to wander and I stumbled upon a back room that was filled to the brim with people hunched over thousands of square feet of tables, playing card games. It felt like I was in a different convention, to be honest, for these gamers were all participating in high-stakes tournaments of collectible card games, with Magic prominently featured as the prime event. There were plastic sheets protecting every card and players nervously shuffled their hands while plotting out their next play. The palpable tension was different than anything else at Gen Con, even when I happened to walk in at almost 11pm.

When I started working here at The Escapist this fall, Magic was still barely a blip on my radar. I had exchanged a few emails with a PR guy who worked for Wizards of the Coast and when he offered to send me some Magic cards, I thought, “What the hell?” It was fun to play when I was a kid, and it’s now my job to be familiar with popular games. See, that’s how they get you. Those little cards are like crack.

It started when an officemate saw the decks on my desk. “Oh hey, you play Magic?” “Yeah, I’m thinking about getting back into it.” “Cool,” he said. “I have thousands of cards after splurging on the Exalted set last year.” “We should play.” “Definitely.” Inspired by that one tiny innocuous conversation, I’ve bought more than 30 boosters, decks and other accessories and I plan to go in with them on getting a box of boosters for the new Magic 2010 release later this month. *Sigh* I’m hooked again. 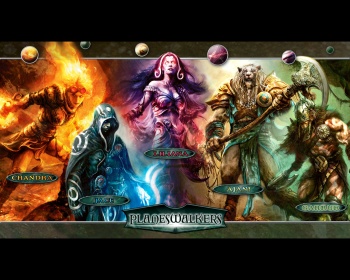 I won’t bore you with the play-by-play of what decks are kicking my ass right now (There’s a killer Zombie deck and a multi-color deck stacked with legendary dragons. Don’t get me started on the freaking deck-burning artifact deck …), but it would be an understatement to say that my Magic habit is back. Oh yeah, I’m full-blown addicted. I’m researching deck strategies online and talking shop at lunch. Every time I go into Target for toilet paper or whatever, I walk out with Magic cards. It’s bad.

We play in the office after work, usually in the Treehouse conference room, but there was a problem. If there were three or more people who wanted to play, there was always the odd man out who was left sorting cards or watching the action. That’s where Archenemy comes in.

The changes to the format are simple. The Archenemy plays first and starts with 40 life. At the start of each turn, the Archenemy plays one of 20 “scheme” cards. These oversized cards (3″ X 5″) give the archenemy huge benefits like a free 4/6 artifact creature or an extra turn directly after the current turn. Otherwise, the game plays as normal. The Archenemy draws cards, summons and attacks with creatures, and tries to take out his weaker adversaries, who still only have 20 life. The other side takes their turn simultaneously and they can coordinate strategy, but they do not share mana.

The first time we played was actually my birthday, so of course I had to be the Archenemy. The deck that came with the scheme cards was a blue/white/black artifact deck, which are always fun to play. I was up against some pretty crazy decks though: a green/red Annihilator deck from the Rise of the Eldrazi set, a vampire deck and a deck-burning discard deck. That’s right, 3 against 1. I didn’t think even my 40 life was going to stand a chance.

Turns out those scheme cards are pretty nasty. The first one I drew had all players shuffle their hands (and graveyard) into their libraries and then draw four cards, while I could draw 7. Handicapping everyone at the start of the game like that was a devastating blow from which my paltry adversaries couldn’t recover. I took them out one by one, concentrating on the Annihilator deck first as I knew that if he got the mana out, I was screwed. Soon, they all fell to my diabolical machines.

It’s good to be the Archenemy.

Magic has been chugging along in the nerd background; it’s crazy to realize that it’s now entering its seventeenth year of existence. I was surprised at first at how easily I was sucked back in, but it’s really a testament to the excellent design of Magic, and how Wizards is not afraid of innovation. Each new set adds fun new strategic elements, and the new Archenemy rules and scheme cards allows groups of gamers to share the same experience. I may be addicted, and my wallet may not be able to support my new habit, but damn if I’m not enjoying the rush.