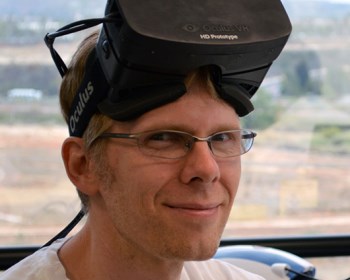 ZeniMax Media announced today that it has begun legal action against Oculus Rift maker Oculus VR, claiming illegal misappropriation of its virtual reality trade secrets, copyright and trademark infringement, breach of contract, unjust enrichment and unfair competition. The two companies appeared headed for trouble earlier this month when ZeniMax, the parent company of Bethesda Softworks, Id Software and various other studios, accused Oculus VR of making unauthorized use of its proprietary technology; Oculus denied the claim outright, stating among other things, “There is not a line of Zenimax code or any of its technology in any Oculus products.”

ZeniMax claimed that while Luckey has “held himself out to the public as the visionary developer of virtual reality technology,” it is actually responsible for developing the technology behind the Oculus VR headset. It also said that attempts to reach an amicable resolution to the dispute had been unsuccessful, which ultimately forced it to file suit.

“Intellectual property forms the foundation of our business,” ZeniMax Chairman and CEO Robert Altman said in a statement. “We cannot ignore the unlawful exploitation of intellectual property that we develop and own, nor will we allow misappropriation and infringement to go unaddressed.”

The lawsuit says ZeniMax has been researching VR technology as far back as the 1990s, and had actually created prototype VR software for early Elder Scrolls games. It also references statements made by John Carmack, formerly of Id Software, about work he’d done on the Rift prototype while he was still an employee of ZeniMax, as well as email exchanges between him and Luckey, and various other key figures at ZeniMax and Oculus, regarding the headset. And it turns out that trouble between the two companies has actually been brewing since the summer of 2012, when Oculus VR used footage from Doom 3: BFG Edition in its Kickstarter promo video, despite ZeniMax refusing to grant it permission to do so.

Interestingly, the lawsuit has been filed jointly by ZeniMax Media and Id Software, and while John Carmack featured prominently in initial reports of the dispute, he is not specifically named as a defendant.