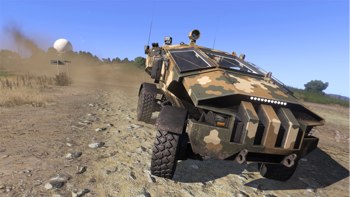 Two hours. That’s approximately how long it took from the moment the Arma III alpha build was released to the public until there were servers available hosting custom fan-made missions for whoever wanted to jump in and play. That might sound surprising, but for Arma fans that level of dedication is simply par for the course. And after playing Arma III for any length of time it’s fairly easy to see why.

In the simplest of terms, Arma III – like all the Arma titles and expansions – is a military simulator, but beyond that, it’s a sandbox. Yes the series does have campaign modes and its own lore, but the amount of customization that is allowed within the games’ walls has led players to use them as tool kits for creating their own experiences, rather than simply a premade adventure to embark on.

When it comes to your character, your options are essentially endless. Depending on the scenario, you can pick up different primary weapons like assault rifles, sidearms, both lethal and non-lethal grenades, helmets, vests, backpacks, first-aid kits, goggles, and much more. You can even strip down to your underwear and take on the enemy with just a pistol and a prayer.

The alpha version of the game that is currently available is just the very tip of the iceberg in terms of content, but there’s already plenty to do and see. As a solider, you can choose either to complete objectives and goals in single-player missions or jump online in both pre-made and custom scenarios where the possibilities are constantly growing.

In its current, far-from-finished state, Arma III‘s story mode offerings are little more than teasers of what we can expect down the road. A total of four short “Showcase” missions are available, covering infantry warfare, ground vehicles, helicopters, and the new scuba diving mechanic.

While brief, the preview missions do a fine job of displaying Arma III‘s superiority compared to its predecessor: Animations have been completely overhauled to look more accrate, weapons sound more realistic than ever before, and the environment – which is currently limited to the island of Stratis – is absolutely breathtaking when played on reasonably high quality settings. When jacked up to max settings, every vista in the game is wallpaper worthy.

Out of the handful of solo missions available, the scuba scenario is by far the most unique, offering the ability to head under the waves for the first time in an Arma title. Disabling aquatic mines to allow for friendly troops to land is just plain cool, and yes, you can even shoot the fish, though we’d never advocate such a thing.

Being a simulation title, Arma III‘s vehicles are predictably unforgiving. Piloting a helicopter is not easy, and you’ll need to overcome a steep learning curve in order to be effective at aerial combat. Just don’t be surprised if you end up crashing. A lot.

But while the single-player content is scarce in the alpha build, the multiplayer missions and scenario editor make online play a much more robust affair. There are already a litany of different custom scenarios available, including straight-up deathwatch and objective-based modes.

Some multiplayer servers restrict gameplay to a small city or town in order to concentrate the action, while others put the entire island – 20 km2 in total – at your disposal. The predetermined size of the battlefield often dictates how each match plays out. In scenarios where battle is limited to just one small town things usually happen at a much faster pace, while a full map skirmish will lend itself more to tactical decisions, vehicle use, and long-range encounters.

Depending on the custom scenario running on any given server, you might be tossed into one of three opposing factions with other friendly players, or allowed free-for-all warfare where everyone is a target. You can traverse the island in trucks, helicopters, armored military vehicles, and ATVs. The alpha includes 8 different vehicles in total, though over 20 are planned for the final release.

Of course, being an alpha release, there are plenty of rough technical spots that need to yet be ironed out. Players will randomly die due to environmental obstacles, vehicle tires will blow out randomly while driving on a flat surface, and managing your inventory is still a rather hit-or-miss affair.

You can purchase the Arma III alpha via Steam or developer Bohemia Interactive’s website, but when you do so, you’re not just getting access to the current, unfinished version of the game. By buying in now, you also will have access to the beta version when it becomes available, as well as the full release later on.

According to Bohemia, the final version of the game will feature over 40 weapons, more than 20 vehicles, a full single-player campaign, and a simply enormous 270 km2 map called Atlis, in addition to the Stratis island currently playable in the alpha version.