From start to finish, Batman: Arkham Knight reminds you why you loved Batman the first two times Rocksteady had their hands on it. The free-flowing combat is as strong as ever, the batmobile adds variety to the game, and the puzzles are just as clever as you remember. While some of the game’s elements aren’t as strong in the much more open world of the new Gotham, the sense of exploration you get from hunting down the game’s challenges is more than worth the loss. Better than anything, the return of some of Batman’s most memorable villains and moments from past games takes center stage and sucks you into the moment-to-moment play. That’s good, because after Asylum and City, Knight had a lot to live up to.

The new Gotham is wonderful, introducing some bright colors and neon to contrast the dingy greys that dominated previous Arkham games. The lighting effects and character design are as on-point as ever, with enemies clearly silhouetted and colored so that even in the busiest combats or cluttered screens you can tell what’s going on, who’s who, and what’s what. Environment design is well varied, and little details scattered everywhere will remind you that the city of Gotham is in utter chaos, very explorable, and filled with hidden secrets to find.

The basics of the story are about what you’d expect: A contrivance forces Gotham to be evacuated, leaving criminals and the desperately insane behind. The desperately insane include Batman and his friends, alongside various police officers. Everyone but Batman exists to be kidnapped or put into harm’s way so Batman can save them – though characters like Oracle, Nightwing, and Robin get their own badass action scenes and key moments to shine. It is not the best Batman story ever told, but it is by no means the worst.

That story has a lot of weight to carry, dealing with the convoluted Batman mythos alongside the events that have taken place over the course of two games now – and even throwing a bone to 2013’s mostly-forgettable Arkham Origins. The game’s writing does well interweaving the many characters that take the stage – and even those who don’t – giving enough screen time to make you care about characters you didn’t know about until this game. Do you care about Man-Bat? No? Well, you probably will if you take a moment to enjoy the side story that features him. The tight nature of the side mission plots actually often makes them more enjoyable than the game’s main storyline.

It’s good that the characterization of individuals is so good, because you need clear-cut and obvious characters to keep up with the main story. Interwoven with constant new action, a few absurd setpieces, and more often than not juggling multiple arcs, it’s hard to keep up with the morass of action the plot becomes. It’s simply… too busy. Worse, really, the plot is so obviously telegraphed and scripted that you’ll often know what’s going to happen with a character hours before it actually happens in the game… and getting to the fulfillment is just a matter of slogging through content. It’s not entirely clear how, but the game’s plot is at times both boring, predictable, and too complex for its own good. To be fair, nobody was expect The Last of Us from a Batman story, but when I was near-constantly rolling my eyes at cliches during the first few missions I found it hard to go on.

That said, the main story thread picks up in its third act, when it stops throwing curveballs and instead focuses on bringing a single scenario to a deeply satisfying conclusion – one I think any fan of the series will be thrilled to see in its last game. Better yet, the vast majority of the game is integrated to work with that main plot’s ending. Even when you finish the story and move on to mopping up side challenges you feel like you’re continuing the same story with the same characters – and both dialogue and events shift to match that.

As usual, the voice acting is on point from almost every corner – with throwbacks to Mark Hammill’s Joker providing the series’ spotlight performance. Likewise, the new Scarecrow does wonders. Much of the workhorse dialogue is a bit stilted though, clearly only existing to spell out the plot and game events for players, and Batman gets the worst of it. Even Kevin Conroy’s iconic performance can’t quite keep up with the limited range of dialogue he’s called on to perform, and Batman’s constant internal monologue reminding the player what to do not only becomes annoying, but seems more than a little tired by the end of the 40 or so hours you’ll be playing. Would the game be entirely playable without that dialogue and hand-holding? Yes. Does the game trust players to figure it out without being explained to? No. 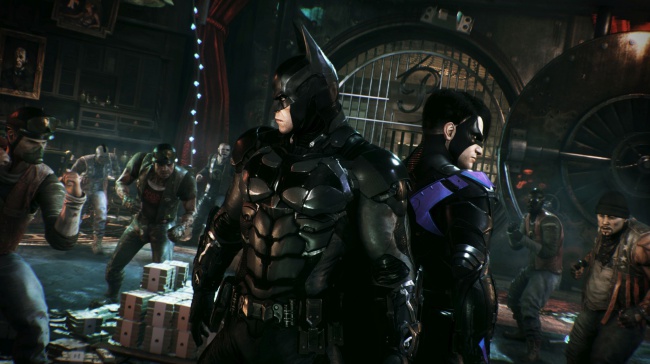 All the core gameplay is still superb, and the variety of different fights you’re thrown into is a real challenge to players’ skills on higher difficulties – requiring you to master your quick gadgets and tactics, as well as your fight positioning, to progress. It’s hard to argue with the core gameplay loop of punch and counterpunch, timed hit and specialty attack sequence. Even if sometimes the field gets cluttered, the hardest fights in the game have pretty convenient outs or clever tricks that let you accomplish them without too many restarts. The teamup fights that were added for this game are incredibly dynamic and fun, though far less challenging than solo fights thanks to the addition of powerful team takedowns that eliminate even the strongest enemies instantly. New players to the series should be warned that there’s not much time spent tutorializing or teaching you about the things you could do in previous games which make repeat appearances from the start in this one, but you can practice in “VR Training” mode to get a re-teach on the basics. Everyone else can skip that.

Sadly, the fights in the Batmobile aren’t nearly as interesting, as they’re more about dodging while your cannon reloads – and I can’t say that the dodge-based tank combat makes me feel very much like Batman. Likewise, the racing and pursuit content in the Batmobile is decent but occasionally frustrating because of the sluggish way the beast controls at full speed and its huge turn radius. Thankfully for most of the game the Batmobile segments are nothing more than short distractions that break up the monotony of beating on thugs and solving puzzles.

Speaking of puzzles, the game is chock full of them, from riddler riddles and hidden trophies to solvable segments that require using every tool available to you in order to progress. There’s a certain amount of optional difficulty there, because the main storyline puzzles hold your hand pretty thoroughly through dialogue, but some of the side puzzles are really fiendish tests I had to abandon and come back to with a fresh head hours later. In true Arkham fashion, minigames abound, from unlocking doors by controller rumble to synthesizing DNA matches or voices. Some of them are truly obnoxious, some fun, and others appear only once – they’re all short, and suffice to say that the worst or most gimmicky of them don’t overstay their welcome. 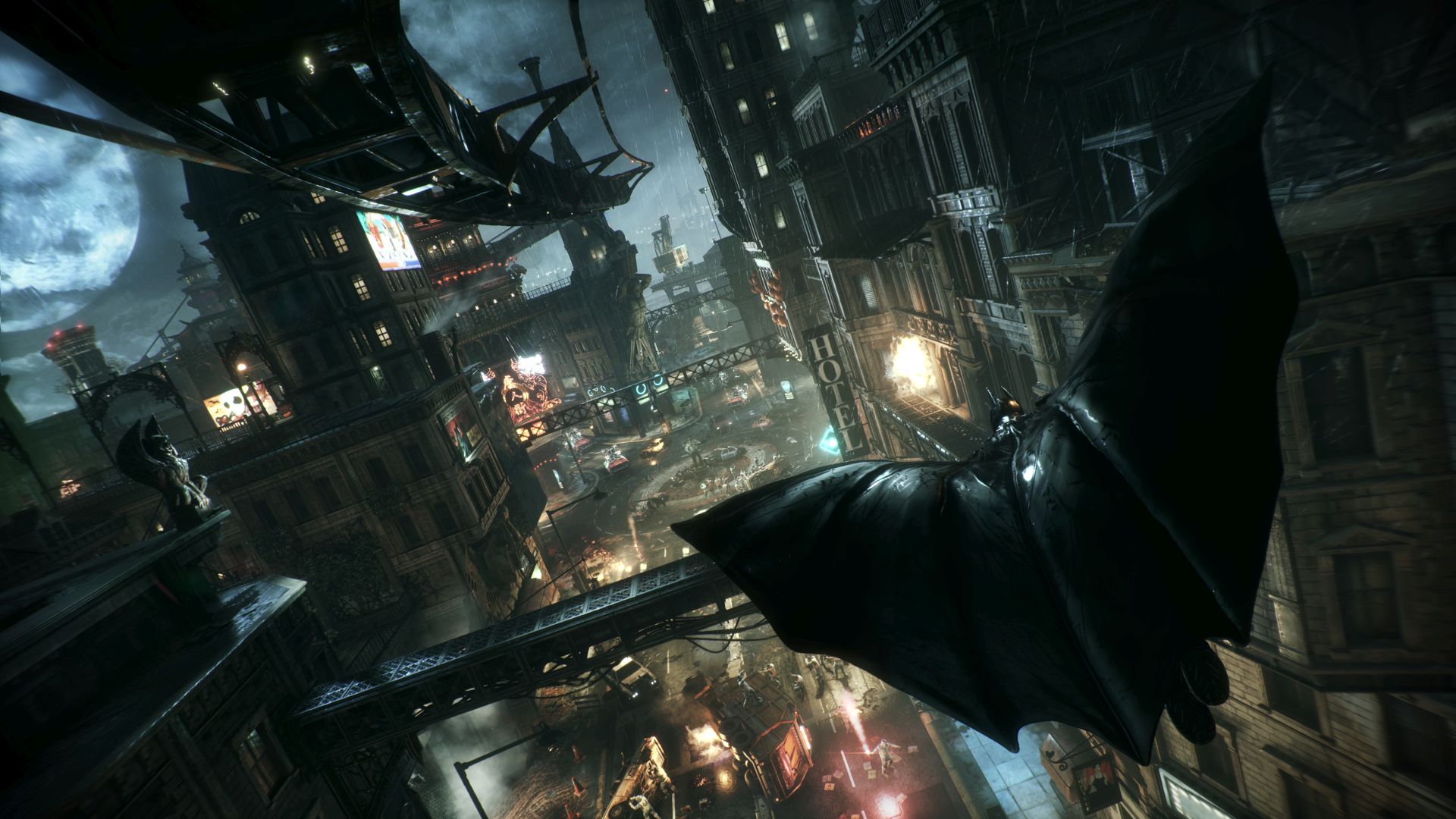 Exploring turns out to be a big facet of the Gotham presented in Akrham Knight. Since the world went bigger, a real worry was that it’d feel empty of content or meaning like some of the areas in Arkham Origins did. However, there’s real enjoyment to be had scouting the nooks and crannies of the city for trophies or things. For example, most missions have to be discovered before they’re marked with waypoints for easy navigation. A mission chain requiring you to find burning buildings really does require batman to climb to the highest points he can and look for plumes of smoke. It’s something games often lack – a real sense of exploration, rather than having your nose guided directly to the goal.

The game performs well, but required a large day one patch – about 3.5 gigs – to function. Bugs were rare, but present, including two hard locks that crashed the Xbox One during my play through. Both occured during a key event that changes the face of the city, so it’s unclear if that was their cause, but because the game frequently autosaves even in the open world I didn’t lose any progress either time. An occasional bug caused enemies in stealth segments to forget they saw batman mid-fight, but that was rare and more amusing than troubling.

The game is long and filled with content – I’d guess at about 45-50 hours for most to get a 100% rating. Much of that is going to be busywork for some players, like hunting down the riddler trophies or step-and-fetching items around the city. For those who complete the game to that level, you get a special, different ending. The Story+ function likewise allows you to keep your progress on collectibles, but restart the storylines with all your gear and experience from a completed playthrough – which is nice if you’d rather get the things that were inaccessible the first time around by experiencing the story again. I’d expect that maximizing your Batman will require a play in that mode as well – I didn’t have nearly all the game’s upgrades just playing through once.

But despite any concerns you might have, this is one solid game. From the variety of minigames and puzzles to the tried-and-true brawling combat the series is known for, Batman: Arkham Knight delivers. The flawless core gameplay, the beautifully designed environments, and the sheer fun of throwing yourself at the challenges of the game are fun for hours on end. This is a game that delivers more than your money’s worth, and gives up precisely what fans of the series wanted: More Batman, bigger and better than before.

Bottom Line: The core gameplay of Arkham Knight is nearly flawless, and most players won’t even notice my problems with story or dialogue.

Microsoft Only Sold 100 Xbox Ones in Japan Last Week