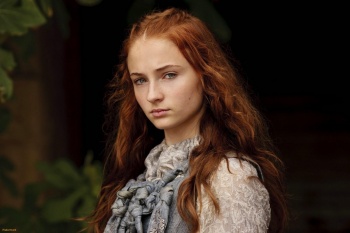 For a summation of the plot without much spoiling, Justin Clouse’s recap, but if you’re a fan of the books and want more in-depth, spoiler-rich discussion of what happens in “Fire and Blood,” read on, my friends!

That’s it. Season one of HBO’s adaptation of A Song of Ice and Fire is complete and I couldn’t be more pleased with the result. Because the events of these ten episodes mirrored Martin’s first book in the series, I kinda guessed that the show would end with the reveal of tiny baby dragons. I also hoped that the special effects budget would be mostly splurged on those shots, and I wasn’t disappointed there.

Viserion, Rhaegal and Drogon looked amazingly real. Having just had a baby, I was impressed with how childlike the dragons seemed, while still appearing dangerous. Drogon, the red and black, certainly commanded respect by spreading his wings and proclaiming to the remains of his namesake’s khalasar that he was a beast to be feared. The green Rhaegal nursing at DAENERYS‘ breast was a nice detail and I loved that the motherly shape of the young queen writhed in dragons was enough for the slaves and riders, not to mention JORAH MORMONT, to swear fealty to her.

Pretty much every person I knew who hadn’t read the books was excited at the prospect that dragons now live again. My wife said, “She’s going to really mess stuff up when she meets everyone else.” I successfully kept most spoilers away from her, but I couldn’t help telling her that Daenerys has a lot of adventures ahead of her and that even I don’t know how her dragons will be received in WESTEROS. Have to wait until at least July 12th and A Dance with Dragons for that.

Not be overshadowed by dragons, the rest of the episode neatly tied up all plot threads. ROBB STARK‘s bannermen declare him the King in the North after his victory outsmarting TYWIN LANNISTER and capturing JAIME. CATELYN STARK is on board with her son “Killing them all.” TYRION is sent to KING’S LANDING to reign (rein in?) his sister and nephew, but decides to thumb his nose at his father by bringing Shae along. LORD COMMANDER MORMONT tells Jon Snow that he is going beyond the Wall to find BENJEN STARK, and that the bastard must give up his ties to his brother forever. Snow agrees, and the shots of the Night’s Watch riding out were especially stirring. I blame the music.

The show’s creators also used a few events from the start of A Clash of Kings to provide a sense of what to expect in season two. The sneak preview of CERSEI banging her young cousin LANCEL was pretty funny, and I liked that she’s probably reading the news of Jaime’s imprisonment even as she tells the boy to go back to bed. The incest transition from twin brother to first cousin does happen kind of quick though. ARYA is now Arry, thanks to YOREN of the Night’s Watch cutting her hair. Martin’s book ended Arya’s POV with Yoren drawing the knife, and having just witnessed NED STARK’S head leave his body, the audience would have assumed that his younger daughter would die too. That cliffhanger might have been nice, but I liked the re-introduction of GENDRY, one of ROBERT BARATHEON’S bastards, and the glimpse of three criminals in the cage: Rorge, Biter, and Jaqen H’ghar. Oh, how important those three characters figure in the story to come. Valar morghulis. Valar dohaeris.

The HBO series did probably as well as it could adapting what is a very complex fantasy tale. But that doesn’t mean there weren’t some missteps along the way.

I still think that Daenerys and DROGO‘s wedding night was mishandled. The show built up the different cultures, and missed the chance for Drogo to be surprisingly gentle which would eventually lead to the pair’s love. Oddly enough, the show chose much slower development of character, which I may actually admit works better if I wasn’t so disappointed with the change.

Also, as Slycne pointed out, the Dothraki horde didn’t really look very horde-like. I know it was lack of budget for extras with horses or adequate CGI, but one single file of horsemen never felt as numerous as it should. 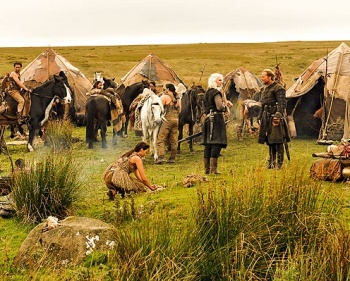 The direwolves received screentime when they could, but I didn’t think the beasts were featured enough. Robb’s Grey Wind wasn’t even named, despite a mention of his ferocity by the Lannister lords in the last episode. We finally did meet Rickon and Shaggydog, but where were they when the WILDLINGS attacked BRAN? I liked when the wolves were seen, but I think they could have been used more.

Tyrion’s fortunes in the battle against the North men were glazed over. Worse, from the editing it is possible to infer that he didn’t take part in the battle at all, having been knocked out by the swinging hammer of his own men. That’s just not what happened at all, Tyrion defeats one knight and takes another hostage in the battle. He is no great warrior, but he holds his own, and I don’t think the show really did Tyrion justice.

That said, I think the adaptation had some stellar moments that may not have followed the letter of Martin’s books but were still amazing to watch.

The verbal sparring between LITTLEFINGER and VARYS was a sheer pleasure to behold. The two spymasters one-upping each other on what they know the other knows verged on poetry. For that scene to be reprised in “Fire and Blood” was wonderful, and set up perfectly how the machinations of these two will continue in the second season.

My wife loved the old GRAND MAESTER PYCELLE and his many proclamations. This last episode got to see him get a little dirty with the most famous whore in the Seven Kingdoms (more on her later) and I loved seeing him go through his little exercises afterwards. Even better was his effort at stooping his shoulders, hinting that maybe Pycelle is not as feeble as he puts on.

I’ve said how much I loved the minor characters; they are at the heart of Martin’s work serving as well-crafted sounding boards for the main characters. Benihoff and Weiss, the show’s writers, kept that spirit by creating one of their own – Roz the red-headed whore. Over the course of season one, she’s mentioned by JON SNOW at the Wall, sleeps with THEON GREYJOY before heading to the capital, is present for Littlefinger’s thesis statement, and provides a foil for Grand Maester Pycelle to expound about kings. That’s a pretty useful character, expertly crafted. Here’s hoping she gets scenes in season two – before she suffers a grisly death, of course.

The action, when it was shown, was fun to watch and felt historically accurate. The assassination attempt on Bran Stark felt immediate and the wolf ripping out the killer’s throat was visceral. Jaime Lannister versus Ned Stark felt like two careful swordsmen crossing blades in the same style, while SYRIO FOREL waterdancing against better armed and armored men just felt perfect. BRONN killing SER VARDIS EGEN before the court of the EYRIE was an example of quickness overcoming formal training, while Jorah Mormont fighting the Dothraki bloodrider showed how better armor sometimes can be advantageous.

For me, though, I’ll always remember season one as a series of dramatic moments. SEPTA MORDANE facing her death at the hand of Lannister guards. Sansa forced to view her father’s head on a spike. Eddard Stark sentencing SER GREGOR CLEGANE to death on the IRON THRONE. Jaime Lannister pushing Bran out the window. Tyrion pissing off of the Wall. ROBIN ARRYN sucking at his mother’s breast. Viserys Targaryen longing for the love his sister enjoys. Arya Stark telling her father that marriage and babies is not for her. I could go on …

The season is over, and, as advertised, it covered all of the events of A Game of Thrones and then some. HBO picked up the show for a second season as soon as the first episode aired, and last night teased that we’d see season two in Spring 2012. It’s a good thing I have Martin’s next book to keep me occupied, but after I swallow that in a week, it will be a long hard wait until I get to travel through Westeros again.