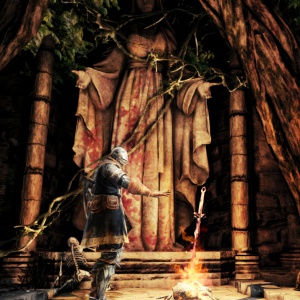 A good sequel is often a surprisingly difficult target to aim for. Change too much and you’ll have fans crying foul over the newest chapter losing sight of what made its predecessor so good. Change too little and you’ll get grumbles about having simply released the same game as last time. The ideal balance likely lies somewhere slightly left of center, mostly the same as the last outing but with just enough difference to stave off complete familiarity. Dark Souls II hits its mark dead-on.

Everything that made Dark Souls into a cult success carries over: complex game mechanics, punishing but fair gameplay and a richly detailed setting if you dig a little deeper. To keep things fresh, this is peppered with a mix of new elements, from improved graphics and game engine to a better designed starting sequence and new mechanics. Dark Souls II is a perfect sequel to Dark Souls.

For starters, unlike the jump from Demon’s Souls to the original Dark Souls, Dark Souls II specifically does take place in the same world as the last installment. However, instead of Lordran you’re now in the kingdom of Drangliec, with little details and reminders of the greater setting found all over. You may even run into some familiar faces, and lore junkies of Dark Souls will certainly get a kick out of tracking down the spiderweb of in-game information and trying to piece it all together.

Once again, your player character is an undead, attempting to fight their curse and stave the effects of becoming a mindless Hollow. To that end, you’re going to need lots of powerful souls, and many a fellow undead has traveled to Drangliec in the promise of such. Dark Souls II is still a game where narrative takes a bit of a back seat. It’s a dark-fantasy world rich with details and part of the joy of this minimalist style is the sense of discovery when something clicks, but if all that is just getting in your way of cracking Hollow skulls then the game is perfectly willing to step aside. It’s an essential compromise that let’s the game find it’s niche as both an RPG and as an action game.

While the Souls games are constantly praised for their challenging difficulty, and Dark Souls II continues this level of challenge – I chalked my first death in less than a minute – I feel that it’s this core of duality that’s really at the heart of the whole experience. Dark Souls II loves to pull you in two directions with its mechanics of checks and balances. The whole system of souls is really what pulls it together. The souls you collect are both your experience points and currency in the game. When you die you drop them. If you can retrieve them without dying again you get them back, but otherwise they are gone forever. When you’re stacked with souls the tension naturally rises and each encounter is a little more hazardous because of the risk, but on the flip side you’re much freer to explore and get in over your head when you don’t have a bunch of souls to lose. There are a lot of choices to weigh up as well – for instance, bosses drop boss souls which you can either cash in for a large sum of regular souls or utilize in the crafting of powerful items.
Similarly, the gameplay reflects a lot of these ideals. You have essentially what’s almost a third-person fighting game with a complex relationship of parry, blocks, staggers and positioning, and you’ll need to be skillful in order to succeed. But all of these elements are being driven by stats that balance themselves as well. For instance, wearing heavier armor certainly offers more protection, but it slows you down, even hampering your ability to dodge effectively. Dark Souls II does introduce some new elements to the tried and true gameplay. The biggest change is how the game handles death, which happens a lot. In addition to dropping all your souls, you’re also going to be penalized a portion of your maximum health for dying. This caps out at 50%, though a ring found later increases the cap, and the only way to regain this is to return to human form by consuming a human effigy item. This makes it much harder to hammer away at a tough section or fight until it eventually swings in your favor, if something is becoming too hard you need to rethink and readjust how you’re approaching it because it’s only going to get worse. This feels like a nice compromise and combination between Demon’s Souls where you always lost 50% of your health and Dark Souls where certain aspects were locked off depending on if you were human or undead.

This actually has some important implications for multiplayer as players are no longer safe in their undead form from being invaded by other players bent on PVP. While the online servers were not available to review the effects of this, there is a noticeable increase in items and game mechanics that interact with this. One of the first covenants that players can join allows covenant members to come to each other’s aid when their fellow members are invaded, ganging up on the would be predator. Even if you’re turned off by the notion of other players coming to gank you constantly, there seems to be systems in place to balance this.

Dark Souls II is also littered with a number of smaller gameplay changes that really come together to improve the experience overall. Enemy AI is noticeably smarter, certainly far less prone from falling off things and plummeting to their deaths. The first time you realize you can’t use this to your advantage any more is going to be a bit of an “oh crap” moment. The AI is also more varied, with some interesting and surprising tactics or attack patterns on display. Long time fans will also notice some minor tweaks with larger impacts than might be apparent – dodging horizontal attacks are much harder to roll under, and taking a hit on your shield when you’re out of stamina will result in a short stun. 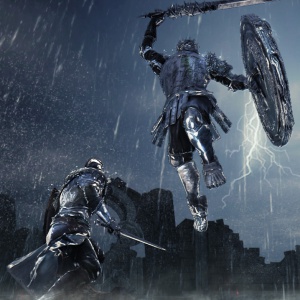 Dark Souls II continues being driven by a lot of little moment to moment choices – do you try and back away from the boss’ attack or aggressively roll under and be in a prime position to counter-attack? Do you attack and kill NPCs for their useful items, even if it means no longer having access to a covenant or merchant? There’s a lot of weight to everything you do in Dark Souls II.

This split nature carries over to the character customization. You again have your pick of starting class and a gift. These gifts run the gambit from helpful items to more story and world connected ones, and can either give you a leg up in the early game or allow for specific interactions in the world. The choices are also better balanced this time around, with no clear outlier as there was before. So, feel free to grab some extra healing items if this is your first time playing without worrying that you’re really missing out.

Classes in Dark Souls II are really more a starting stat distribution and item outfitting than anything else. Leveling and item equip restrictions are stat based, so you’re free to develop your character however you choose. There is no wrong choice at the start as you can simply invest the time to level up whatever stats you want going forward. The warrior or knight are good choices for beginners, but don’t be afraid to try something else. One of the improvements for this sequel is a more structured starting experience, though it’s rather cleverly designed to be easily bypassed.

There is even a new mechanic to allow you to respec your stat points. A rare item found in the world gives you a limited number of redoes, and is certainly nice for the first outing when you find some awesome weapon you want to use and are not built to handle it in the least. You also don’t need to worry about going down any dead-end builds. The item is quite rare though, so use them sparingly and only when you’re sure.
Character customization is also where you’ll likely first take real notice of the improved graphics and how From Software is leveraging their new engine. Faces especially have improved from the ugly blobs from before, and the game is downright gorgeous at times. Sure, it’s still last gen and there is the occasional bad texture or some poor geometry, but some of the vistas you visit are just breathtaking. I can’t wait to see it on the PC. The game also runs very smoothly, kind of important for this style of game, with only the smallest of hiccups at times and certainly nothing approaching the level of issues seen previously.

Most importantly, Dark Souls II continues to capture that awe of not only presenting this world visually, but also seeing something off in the distance and knowing that it’s an actual location, not just scenery. The towering black spire looming off ominously on the horizon is all the more ominous just knowing you’ll be headed there eventually. If I did have one criticism to leverage against the game it’s that the map isn’t as well designed as before. Dark Souls had this ingeniously twisted web of locations. It led to this great feeling of interconnection where each zone flowed and shortcut to often multiple other areas, whereas Dark Souls II feels a bit more like spokes going off a wheel. It’s not bad, but it’s not as interesting. Part of this is likely do to some of the changes in mechanics, you’re free to teleport between the bonfires that serve as your waypoints and health regeneration.

A few of the first couple bosses could stand to be a bit more interesting, but these are ultimately just nitpicks. What could very well have felt like little more than a new New Game+ for Dark Souls manages to craft another experience I’ll happily sink hours and hours into.

Bottom line: Dark Souls II is Dark Souls refined and given an extra layer of polish.