Developed by Ecole Software and French Bread. Published by SEGA. Available on the PS3 (reviewed), and PS Vita. Copy provided by publisher.

The modern fighting game genre can be broken down into two different styles, and Dengeki Bunko: Fighting Climax doesn’t quite fit either. The hardcore fighter prioritizes it’s mechanics above all else. These are games like Street Fighter V, Mortal Kombat X, and Guilty Gear Xrd, which are fun because of their deep systems and competitive rosters. The franchise fighter, however, does the opposite. They have very easy but shallow mechanics and prioritize making its characters feel true to their parent IP instead of feeling balanced. They also prioritize single player plot heavy modes as opposed to versus play. These are titles like the Dragon Ball Z series, the Naruto Shippuden series, and other anime inspired titles. 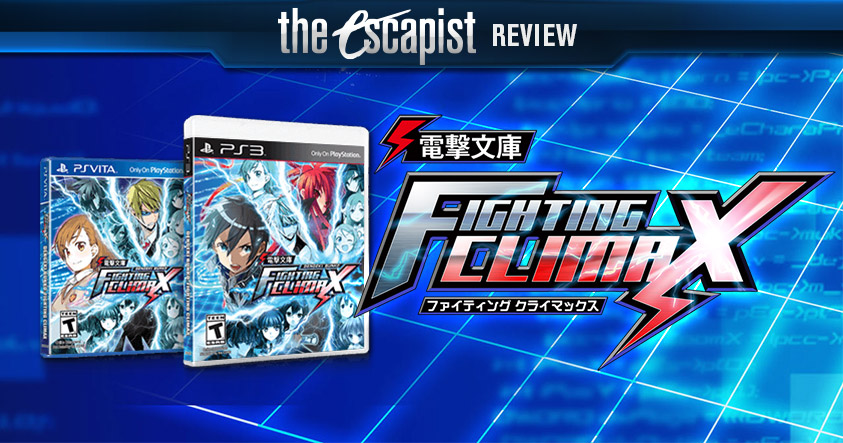 Then we have Dengeki Bunko: Fighting Climax, the recent crossover anime fighter from SEGA, and it feels like it can’t decide which camp to be in. Its core mechanics are simple and mashable, but its deeper mechanics are tough for even veteran fighting gamers to keep track of. Its roster is largely unbalanced, but its assist system allows for complex matchups. It has a roster of beloved anime characters but rarely references the story behind any of them. It’s a walking paradox of game design that feels like it’s trying to appeal to everyone, but instead feels inconsistent and flawed. 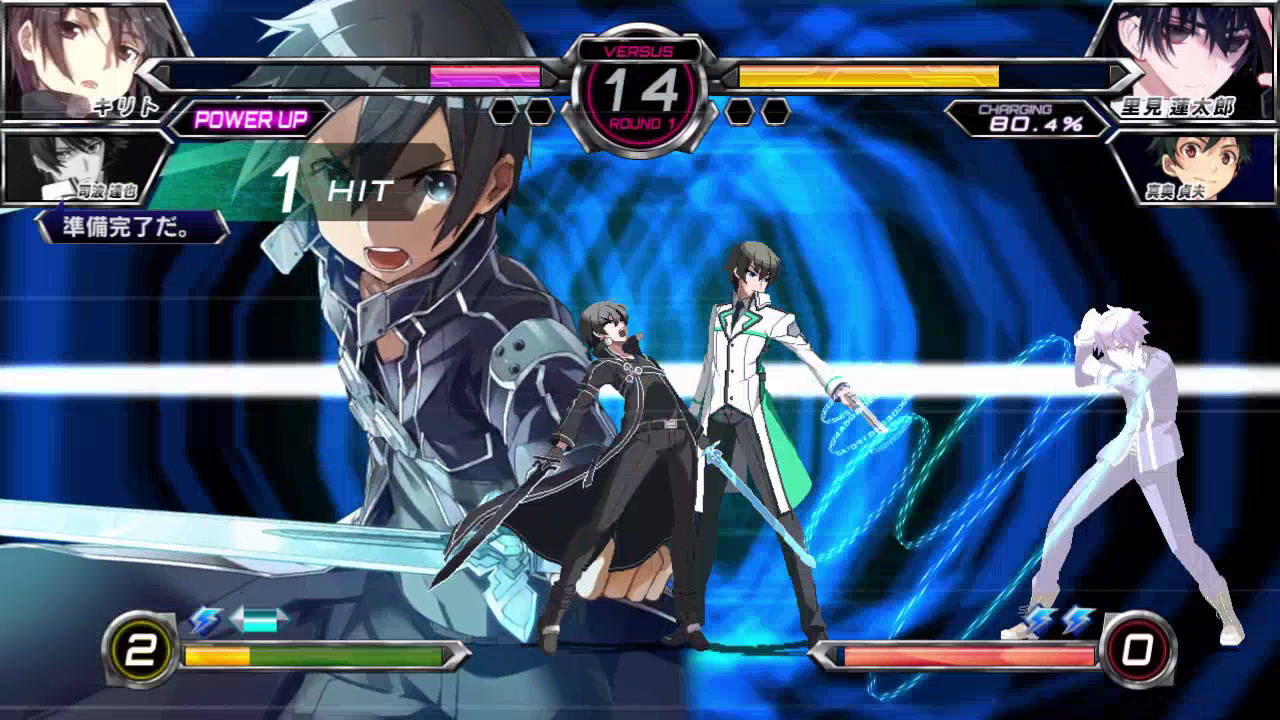 Let’s start with the concept. For anyone who isn’t a hardcore anime fan, Dengeki Bunko is a Japanese publishing company that is responsible for the light novels a lot of popular anime series are based on. If you have watched Sword Art Online, The Devil Is a Part-Timer, A Certain Magical Index, or Durarara, then you have partaken in some of Dengeki’s work and will recognize the characters in Fighting Climax. If not, then you’ll probably find some characters to like, like that guy with swords in the black trench coat, or that dude in the bartender’s outfit that throws refrigerators at people, but you might also be weirded out by the schoolgirl that fights with cosplay.

The characters all feel like their anime incarnations in battle, utilizing iconic moves that are known for. But they feel out of place in the story. In fact, the story of Fighting Climax is barely worth mentioning. A mary sue fan character wearing Dreamcast themed clothing summons all the playable characters to combat a vague evil presence and, well, that’s pretty much it. The characters proceed to fight each other for ill-conceived reasons with a minimal amount of dialogue expressed through cutscenes.

Story is one of the biggest draws of the franchise fighter. The ability to participate in the epic stories of anime characters is why the Dragonball Z game franchise continues to sell even though the anime last aired in 1996. But Fighting Climax barely even mentions the original stories that its characters come from. In fact, its story mode is really just a barebones arcade mode with some dialogue boxes. This is unacceptable in an era where even hardcore fighters like Blazblue have 50 hour campaigns.

Lack of story is harmed further by the random insertion of SEGA properties. I don’t care how epic the fight is, I can’t take it seriously if we’re battling on Green Hill Zone.

So if we can’t enjoy the story, let’s look to the mechanics and treat it like a hardcore fighter instead. Fighting Climax utilizes the same “Light, Medium, Heavy” three button control scheme that many fighters utilize these days. Light combos into medium which then in turn combos into heavy, special moves, super moves, and so on. Fighting Climax also utilizes an auto combo system, where simply mashing on the light button will make you do every strength attack you have in sequence, a special move, and then a super if you have meter. But unlike other fighting games whose auto-combo only works when standing, Fighting Climax’s auto-combo works anywhere. Standing, crouching, jumping, you name it, mashing on light is a one way ticket to decent damage. It makes it very easy to get into the game as a beginner, as you’ll be comboing with the best of them right out of the gate, but it also makes the combo system feel shallow, with few “advanced” combo opportunities to speak of.

Fighting Climax also has a lot of universal moves. Pressing light and medium at the same time will use a slow move with “armor” properties, which can beat other moves but is easily punishable. Pressing light and heavy at the same time uses a “trump card” move which does a lot of damage, is an overhead, is invincible, is unblockable in the air, and grants you a buff for a short period of time, but you can only use it a limited number of times per match. Pressing all three buttons triggers your “blast” which can be used either to power your character up or escape combos. All special moves are also universal, with an offensive one on quarter circle forward attack and a defensive one on quarter circle back.

On one hand, these universal moves make the game easy to learn. As long as you can do the most basic fighting game motions you can activate every single move of every single character. On the other hand, this makes every character feel samey because move lists are very short. Matches tend to boil down to this sequence: Get close, avoid your opponent’s invincible attacks, mash light attack until you win. There isn’t enough move variety to have archetypes like a dedicated zoner or grappler. Everyone is just the same variety of medium strength rushdown aggro. 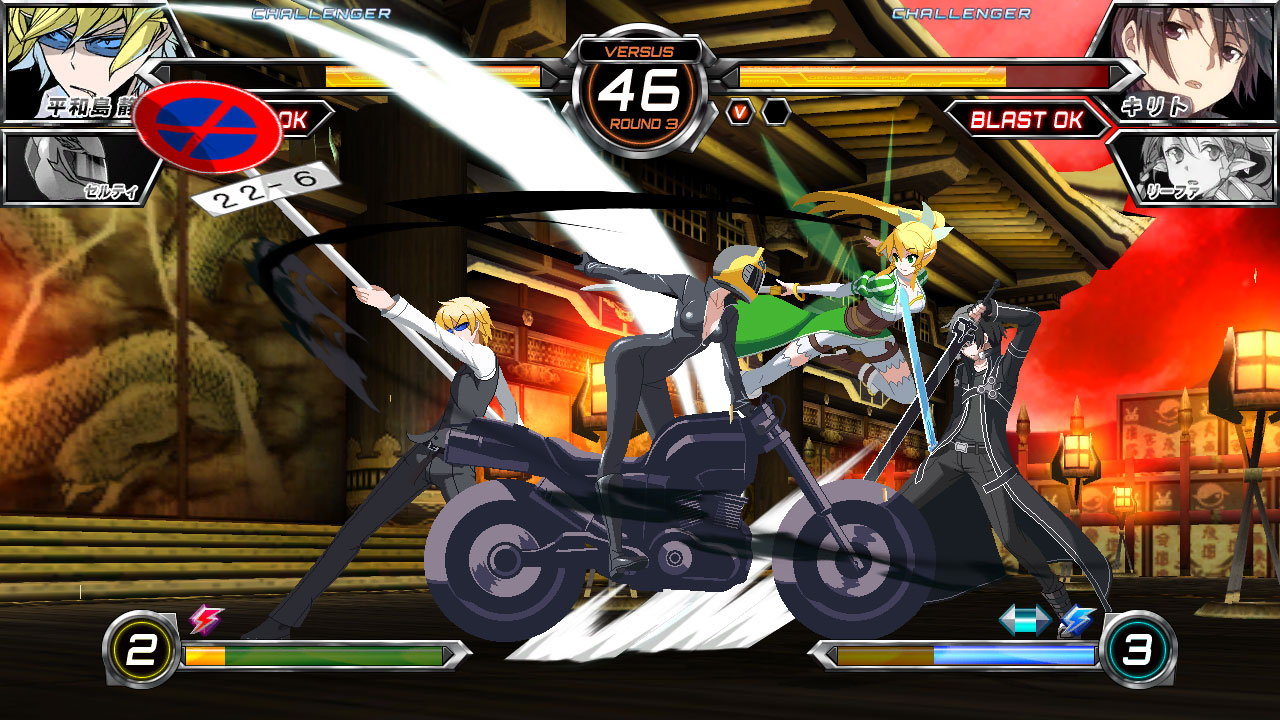 To counterbalance this sameyness, the game has a deep assist system. Before each match, you choose an assist character which is called via a fourth button. Each assist character has a defensive and offensive attack, and after being called, needs to recharge before being used again. However, you can spend meter to call your assist in the middle of your combos, which also serves as a makeshift cancel, returning you to a neutral state. This is about as close to the serious hardcore end of mechanics as the game gets.

This large and expanded assist roster gives Dengeki Bunko a surprising deep pick/counter-pick metagame. Sometimes the only difference between an easy win and an uphill battle is the assist you chose. The assist roster also adds several new characters from otherwise unrepresented series into the mix. However, the playable roster is only 14 characters large, while the assist roster has 23. Frankly, many of these assists feel like missed opportunities for fully fleshed out characters, and any die-hard fan of Dengeki’s properties might be disappointed to know that popular series like The Devil is a Part Timer, Kino’s Journey, and Spice and Wolf only have representatives on the assist roster.

There are a lot of other systems in the game, but they all feel half-baked. For example, there are a million ways to power-up your character. Characters have “potentials” which give them power-ups any time certain conditions are met. Blasts can power you up, trump cards can power you up, even certain assists can power you up. Power ups range from simple damage boosts, to allowing your character to combo without restrictions, to letting every move be jump canceled. The problem is there are so many ways to activate a power-up you rarely actually try to do it. You just play the game and sometimes it happens. It feels random rather than deep and complex.

Despite these flaws, I could probably enjoy Dengeki Bunko: Fighting Climax… except the rest of the game feels so spartan. There is no tutorial mode, which is, again, inexcusable in the modern fighting game age. The online mode only features ranked and lobby matches and its lobby settings aren’t as in-depth as competitors like Guilty Gear‘s. There are two characters and a handful of color palettes to unlock, but doing so is more tedious than challenging. There just isn’t a lot to keep you coming back unless you have a dedicated group for versus matches.

Perhaps the most egregious, if strange, flaw of all, is that the problems with Dengeki Bunko: Fighting Climax have already been fixed! A sequel to the game, called Dengeki Bunko: Fighting Climax Ignition is already out in Japanese arcades, and will be coming to the PS3, PS4, and PS Vita in Japan this December. The sequel features more characters, more intricate systems, more assists, and more game modes. It takes the game we have now and turns it into a fairly competent hardcore fighting title. Barring any surprise errors, it’s obviously the better version of the game and, let me repeat, it’s already released in Japanese arcades. This makes it hard to justify a purchase of this version when you can wait two months and import the new version, or just pick another fighter and get Ignition when it comes to The States.

Bottom Line: Dengeki Bunko: Fighting Climax just isn’t giving fighting game fans or anime fans what they want. There’s potential, which may be realized in the sequel, but as it stands it’s a mashable fighting game with more novelty than anything else.

Recommendation: If you’re a huge fan of Dengeki’s properties, don’t want to wait, and don’t do imports (remember, Sony consoles are region free!), then you should consider picking this game up. It’s also a good choice if you aren’t that good at fighting games, but still want to feel the rush of doing long combos in a 2D fighter.