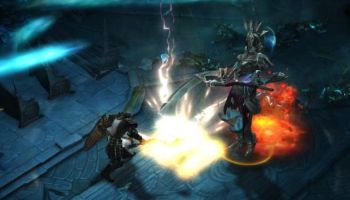 It’s become somewhat cool to hate Diablo III these days, even long after Blizzard Entertainment eradicated the shambolic Auction House and put the focus firmly on earning loot the proper way. You dare to talk about the game on social media these days, and you’ll be inundated with people quick to remind you that the game “ruined” Diablo forever, and utterly sucks compared to that which came before.

I must confess, I am not one of those people. Diablo III was, in my opinion, a delightful game in its own right, one that stole days and days of my time as I replayed the campaign on increasingly ludicrous difficulty settings. With Diablo III: Ultimate Evil Edition, I had little trouble diving right back in, and losing my days all over again.

Ultimate Evil Edition marks the game’s debut on PlayStation 4 and Xbox One, bringing not only improvements from the original 2012 PC release, but the Reaper of Souls expansion. Best of all, there’s not a trace of the Auction House, the loathsome thing that undermined loot-grabbing, as well as crafting, in an attempt to turn Diablo III into eBay: The Videogame.

Since this is my review and I’ll use any platform I have, let me just say it’s almost infuriating how better a game Diablo III is without a system put in place to try and force the use of a contrived marketplace. In one campaign run of the game on PS4, I’d picked up more character-relevant equipment than I’d done in multiple playthroughs of my pre-improved PC version. Without the auction house, there’s an actual joy in defeating bosses and pouring through his loot drops. There’s an actual point to the crafting system. One isn’t inundated with crap they don’t need in a cloying attempt to make them sell it to some other player. There’s some bloody soul now – something the Auction House had, somewhat fittingly, reaped.

Playing Diablo III on a PS4 controller feels pretty damn good, with the face and shoulder buttons conveniently mapping one’s skills, while the D-Pad handles maps and town teleportation. Using any of the attacks will trigger an auto-aim feature that sometimes has a habit of targeting the wrong guy (such as, say, a demon that’s a mile away from the one that’s smashing your face in), but moving the left stick will select another enemy and regularly resolve any issues.

The left side of the touchpad brings up one’s inventory, while the right side quickly brings up the skill menu. All in all, the game’s mapped with a sense of pleasant convenience on the DualShock 4, and while purists may stand adamantly by their mice and keyboards, I personally enjoyed using the controller a little bit more, and dug the sense of direct control I had over my character. I fully understand that such words are as blasphemy in the eyes of vengeful gods, and I have already submitted myself for electroshock correction. 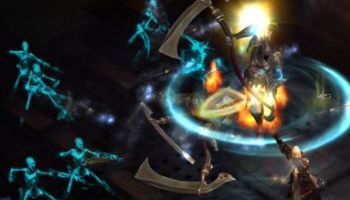 Sadly, there are no real DualShock-specific features. The controller’s light remains a constant orange, and the speaker isn’t used for diary entries or other such ancillary sounds. While this isn’t a dealbreaker, I cannot help but feel a tad let down when a port doesn’t at least find some convoluted excuse for the extra aesthetic pleasantries, and Diablo III certainly had plenty of opportunity for them.

The game runs well on PS4, with no noted slowdown or other technical hiccups, even when the screen’s a chaotic mess of goatmen and bloody chunks. It looks as pretty as it ever did on the PC, though given the fact that this predates either the PS4 or Xbox One by a significant margin, it bloody well ought to look and sound top notch!

Outside of all that, this is the same Diablo III enjoyed by an insane amount of people on PC, and while it almost seems impossible that anybody who wanted to play it hasn’t done so yet, this is well worth picking up for the current-gen system owner who is yet to experience it.

For all the criticism it might have had, the current iteration of Diablo III is a ludicrously addictive loot-grabber that, at least nowadays, reminds me why I love to dungeon crawl. There’s a sense of pace and fluidity that make this game easier to enjoy for me than prior Diablo games, and while I understand that I’m saying heretical things again, I am bound by my sense of honor and duty to confess.

So basically, what I am saying is that Diablo III: Ultimate Evil Edition is a great idea if you are, like me, everything a true-blooded Diablo fanatic hates. If you’re the kind of person who should be burned at the stake for your dangerous views and filthy, filthy ideas, then nabbing this for your PlayStation 4 or Xbox One is a good idea.

Unless, of course, you already bought it on PS3 or Xbox 360, because otherwise this is subject to the same caveats that must be employed for the other recent double-dips lately. Like Tomb Raider: Definitive Edition and The Last of Us: Remastered, the truth of Ultimate Evil Edition is that it’s mostly a visually enhanced re-release of a game that’s less than a year old. The last-gen consoles got Diablo III last year, and the inclusion of Reaper of Souls, while cool, might not justify a full repurchase. Still, if you have the bones, you can port over your save file from PS3/360 to PS4/XBO, so that’s a nice thing you can do.

At least with this one, we already knew it was coming to PS4 and Xbox One ahead of time, so there’s a good chance some of you were waiting on this one as opposed to grabbing it last year. If so, have fun! I certainly did.

Bottom Line: A fantastic dungeon-crawler that is still mercilessly addictive two years after the fact, Diablo III turns out to be a surprisingly good console fit. Most of the content will have been seen before if you have a prior version though, so don’t feel pressured to rush out and get it.

Recommendation: As I already said, if you’re enough of a heathen to prefer console to PC, and you really love Diablo III, this is a very worthy purchase.