Disintegration has quite the compelling concept. It’s as much a strategy game as it is a shooter, with players riding around on hoverbikes, each commanding a crew of android allies on the ground below them in epic battles both alone and against other players. It has the potential to tap into that accessible tactical badassery of Republic Commando in a way few games do. What a shame that the second you put the technical beta through its paces, it immediately falls to pieces.

Even during the game’s tutorial, things felt off in Disintegration. For one, my hoverbike was incredibly sluggish. Out of the several crews available to choose from, I was hard pressed to find a bike that isn’t sluggish or made of tissue paper. Combine this with esoteric weapon sets and the inability to customize loadouts, and I had to choose between being able to move at a decent pace or not dying instantly when more than one enemy engaged me.

Team composition was never a concern, with almost everyone playing as Lost Ronin, Warhedz, or Neon Dreams out of the seven options available. Given that double-teaming was the easiest way to eliminate anyone or accomplish a goal, many players just dragged their units along like bugs on a windshield. Strategy was the last thing on anyone’s mind.

I can’t really blame any of my opponents for this as Disintegration’s user interface is utterly incomprehensible in the heat of the moment. The onscreen text can get small enough an ant would need reading glasses, and I was sitting right in front of my screen. Game modes don’t clarify at all how they need to be played either. I had to give up trying to play Retrieval, an attack/defense twist on Capture the Flag mode, because my teammates kept bringing the explosive cores back to our base rather than the drop off point. Some announcer prompts made our successes sound like failures, just in case things weren’t confusing enough. Icons for my units, allies, objectives, and more all danced across the screen like a snow flurry while I was busy trying to not get shot out of the sky.

Situational awareness is paramount in a competitive game, and I was hard-pressed to find any in Disintegration, even after several matches. Hell, it was hard to tell if I landed a shot or was being hit unless I looked directly at either my or my opponent’s health bars. If there were audio prompts, they’re either too quiet or must’ve glitched out. The frame rate certainly wasn’t behaving itself, turning into a chugging mess whenever more than four players were in the same city block.

Even when the frame rate held, issuing orders was rarely worth the effort. You can’t just point to anywhere and issue orders — instead you have to drive so close to where you’re pointing that you might as well do it yourself. Speaking of basic sensibilities, a distinct lack of punishment or compensation for rage quitters cost my team a match. If nothing else, there should be bots that can fill a slot; players versus bots is a standard mode for most AAA titles, even those without a campaign in development. 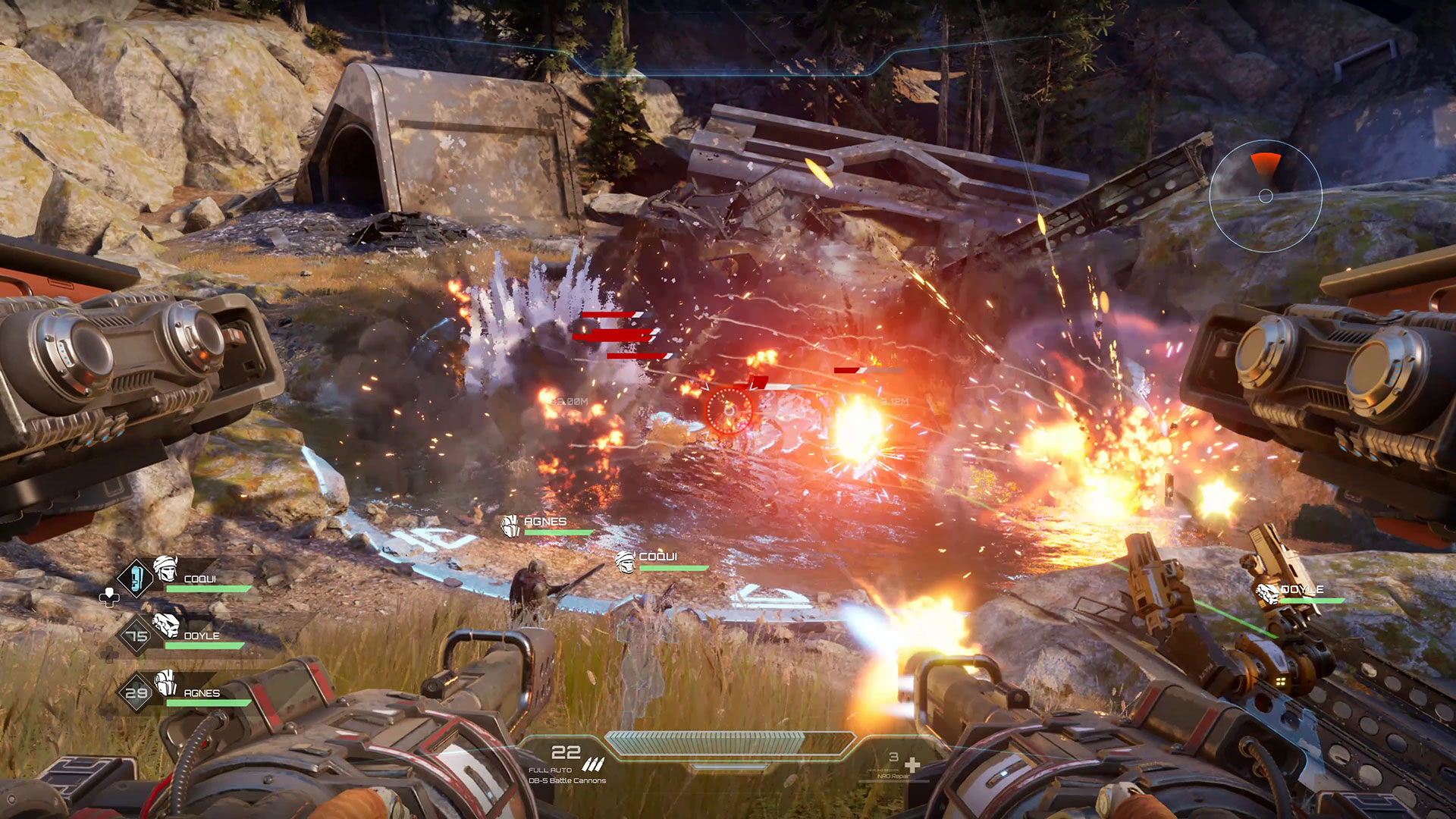 What’s most frustrating is that the ideas in place are solid. There’s no generic team deathmatch, but instead variants on Domination, Kill Confirmed, and Capture the Flag, with wrinkles that make them work in a quasi-RTS context — like having your infantry carry the objective. The abilities your crew can unleash should be devastating, and their dialogue is well-delivered. The aesthetics of each crew are gorgeous, as is the music, all of it capturing a District 9 vibe. There’s immense potential for a high-skill-ceiling game that welcomes action and strategy fans alike. Yet, I can’t shake the feeling that V1 Interactive severely overstretched itself here.

Not only does this gameplay seem better suited to a cooperative multiplayer context, but the time I invested didn’t offer any fun. I’m still not sure how I scored as high as I did some matches, often scratching my head because I rarely felt as though I’d contributed to the objective. There’s still every chance its single player will make this all worthwhile, but I just don’t see players having patience for Disintegration’s competitive multiplayer without some substantial improvements down the road.