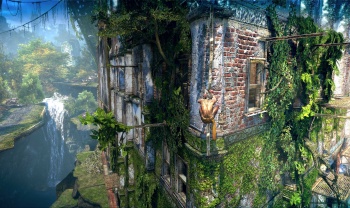 After years of following and covering the videogame industry, the 2010 E3 was the first one that I attended. By all accounts, I picked a good year to pop my E3 cherry. The pomp and circumstance were back in full force, with companies shelling out millions of dollars to compete for my attention. Activision and Microsoft alone threw down in a bombastic battle for who can host the most epic party, with Nintendo and Sony and all of the rest hawking their best wares for the gobs of gamers who flocked to the L.A. Convention Center. Did it work? If your measure is whether E3 was a hell of an event, then yes, sir, yes, it was a success.

The first rule of E3 for game journalists is that you don’t talk about how much work covering a show like E3 is. But I have to tell you, it’s tough. My dogs were barking from day one. The tradeoff is that I get to see the coolest games before anyone else does. Here are my picks for the best games of E3:

5. Lara Croft and the Guardian of Light: I got to play this game for almost twenty minutes as I was waiting for another appointment in the Square-Enix Booth and I was pleasantly surprised at how engrossing it was. It’s a top-down isometric platformer-puzzler that seemed to have more in common with Gauntlet than the more 3D Tomb Raider fare. It’s a downloadable title that doesn’t try to do too much more than provide a fun dungeon-crawling experience.

4. Enslaved(pictured): This game just seemed to speak to me and I’m not 100 percent sure why. It has great talents working on it like Andy Serkis from LOTR and a good scriptwriter, and its story of playing a character that’s being forced to act against his will is pretty neat. The relationship of slaver and slave is all sturm and drang at the start of the story, but you know that Monkey and Trip are going to end up romantically tangled before the ending cinematic rolls. Maybe it’s the anticipation of such a romcom concept wrapped into a decent action game that tugged at my heart strings. Or maybe I’m just a sucker for post-apocalyptic New York. Either way, I’m digging what I saw of Enslaved

3. Rage: A lot of people have been talking about Rage and, at least right now, I’m totally buying into the hype. This game looks great and it seems to incorporate many of the elements that I look for in games: collecting stuff to make engineering items, kitting out your phat dune buggy, surviving in a barren wasteland, and mutants and different bandit gangs all trying to kill you. There’s not much to dislike and when you throw in Carmack’s tech that pumps all of that at me in near photo-realism, yeah, I’m totally picking this up when it drops next year. Wait, next year? Crap. 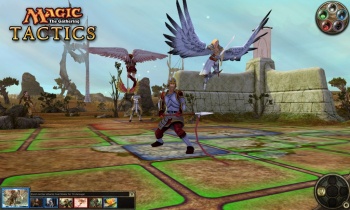 2.Magic the Gathering Tactics(pictured): Let me get this straight, Sony Online is making a game that combines the summoning and mana generating of Magic cards with the turn-based tactical gameplay of Final Fantasy Tactics. Sign me the fuck up. I got to play a match using the PC engine for MTGT and I was psyched at how they combined the two mechanics. Mana is generated in set amounts based on what “cards” you put in your deck to start. For example, if you have 3 white spells and 1 green spells in your arsenal, you get 4 white mana and 1 green mana every turn. It starts with just you as the planeswalker and you use mana to summon your creatures around you on a grid, each of which have their own abilities and powers. I can’t get into to all of the ins and outs of the rules now, but just the fact that I could spew 1000+ words on the intricacies of this game means that it’s going to boast dense tactical strategy. I tap 3 swamps and summon MTGT onto my computer now!

1. Civilization V: There’s no question about it. When it comes to Civ, I’m a complete fanboy. I have played more hours of Civ games than any other videogame combined (with a 6 year sub. to WoW, that’s saying a lot). From the first game that I got from a friend at school on 2 floppy 3.5″ disks to the religious orgy that was Civ IV, I’ve played them all and I am definitely a sufferer of “One More Turn” Syndrome. Civ V is turning a lot of the classic gameplay on its head, and I think it’s all awesome. The single unit hex-based combat and the tweaks to the civic system are all seem like steps in the right direction. Safe to say, I walked away from the Civ V demo at the 2K booth with the full intention of pre-ordering the game and taking a week off of work. September 21st can’t come soon enough!

That’s it, my favorite games of E3 2010. And even though my beloved Celtics lost to their arch-enemies, the Rapists and Brawlers (aka Lakers), on the last day of E3, I wouldn’t have traded the experience for anything.