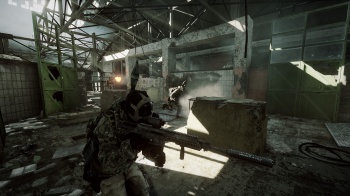 Players ready to catch more content for DICE’s 15-million-player popular Battlefield 3 should find much to get excited for with Premium, a new service set to offer maps, weapons, and other perks to hardcore and/or bargain-hunting players for a one-time fee of $50.

Five full expansions are on offer and, while most aren’t yet out, new content will be delivered to Premium players a full two weeks before the rest of the plebs are able to get their hands on it at full price. The package will include Back to Karkland, Close Quarters, Armored Kill, End Game, and Aftermath, each themed and designed after a different facet of war, i.e. tank battles or claustrophobic infantry-centric skirmishes.

Premium peeps will also be on the receiving end of twenty new maps, twenty new weapons, ten new vehicles, four new game modes, and the ability to reset your stats (“No really, I never lost eighteen games in a row. You must be remembering that wrong; check my Battlefield account!”)

While three of the five sets are yet to be released, the new maps and toys feel as solid as the rest of the game. Encounters are massive, and all strategies (tanks, planes, and everything in between) continue to be viable for snatching high score. There really aren’t any new surprises here, so I’ll leave it at this: If you like Battlefield 3, and just want more of it, you probably can’t go wrong with Premium. You get a truckload of content, and save $25 off the cost of buying them separately.