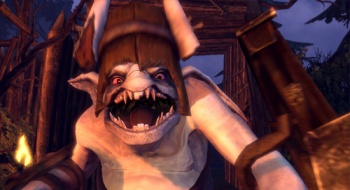 It was almost impossible not to make fun of last year’s Fable demo. The cart driving, goblin shooting demo wasn’t at all what people had expected, either from Lionhead, the Kinect or Fable. This year things seem to have got back on course a bit, with a more obviously heroic experience. Yes, you still drive horses, but the combat and action scenes appear to have opened up a bit to allow for some actual gameplay.

The entire experience was built to be played without a traditional controller. Everything you do with the game is handled through the Kinect. It’s a long play narrative, which also necessitates sitting while playing, so you’re only going to be using your upper body and voice to interact with the game.

Your movement from encounter to encounter appears to be entirely on rails, but that doesn’t mean you’re motionless in the game. Not only can you use your hand gestures to steer your horse along, but you can also lean from side to side to take advantage of cover during key battles. It’s sort of like a first-person view of Space Invaders. There are also sliding sequences where you have to lean your body left or right to avoid obstacles that are rushing up to hit you.

All the spells are gesture based. Hold your left arm up in front of your face to create a shield, and push it out in front of you to use a force push to knock enemies down or strip them of their weapons or armor. Pull your right hand back like you’re throwing a spear to launch your javelin spell, or simply twirl your hand up in the air to access the fireball spell. Many of the spells you use will have some sort of post-release interactivity, so you can redirect spells even after they’ve left your hand.

The hands on demo featured battles against the usual rank and file skeleton warriors, as well as a final showdown with a massive, turtle-like cave troll. Understanding just which spell an enemy was most vulnerable to, and then setting up combos seemed to be generally fun, but it seemed to take some players a while to get used to the controls.

On the RPG front, Fable: The Journey will include loads of upgrades for the spells and, with the promise that a single play through will not be enough to unlock every upgrade, it could be interesting enough to warrant multiple plays through.

The game is due out October 9 for Kinect.