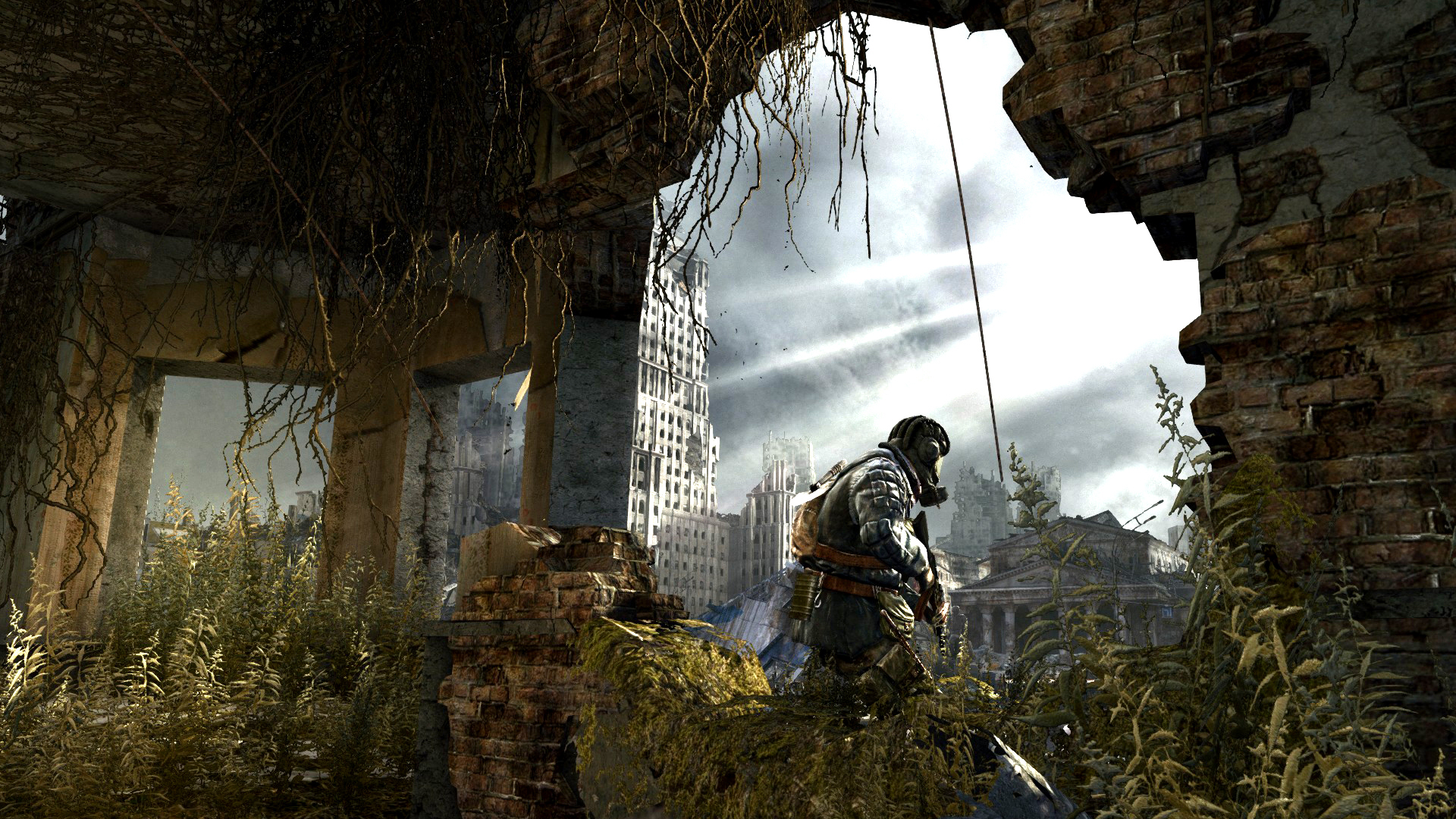 THQ’s bid to combat shooter-fatigue, Metro: Last Light, is built on three core pillars: plenty of detail, loads of terror, and a healthy helping of Eastern European mysticism. The game is being shown behind closed doors at E3 this year and, while the demo itself is pretty scary, it also relies heavily on the more visceral sorts of horror: blood, fangs, and in-your-face screams. The demo did feature a few genuine moments of surprise or dread, but the E3 presentation seems more geared towards presenting horror in a visual context rather than developing a sense of fear.

The demo begins with a few flashes of the world before things went to hell. The player is a little child riding a rather grim subway with his mother. He keeps staring at a poster on the train advertising ice cream, stealing glances up at his mom from time to time. The scene then shifts to two scavengers, one of whom is the player, opening the doors of an abandoned subway car. Right there is the same poster. The implication, I suppose, is that the scavenger you’re playing is the same little boy from the previous vision.

In any case, the game doesn’t linger on this image but drives you right ahead in the heart of the ruined city. An airliner lies crashed, with its fuselage half buried in a toppled building. Our scavengers race across the square just as the sky darkens and rain pours down. They head into the metro tunnels and begin looting everything they can find. Apparently no one in this world goes anywhere without at least a few shotgun shells on them. This concept of scarce resources is key to communicating the sense of horror here, but it’s not strictly limited to things like bullets. In the world of Metro: Last Light, air filters that allow you to breathe the air in the metro are even more important than weapons.

As the scavengers split up, the player moves into a small side room and begins to loot items from the small table next to the wall. Without warning, a terrifying demonic dog leaps from the shadows in the corner and knocks the player to the ground. The dog snarls and lunges as the player reaches for a shotgun and blasts the dog’s head off. Blood flies everywhere and even obscures the player’s mask. He reaches up a hand to wipe it clean before heading back to join his comrade.

The pair emerge from the metro and, after hiding from a whole pack of these dogs, head into the wrecked fuselage to check for more items. Your companion’s warnings about the souls of the dead, whose skeletal forms are still belted into their seats, seems particularly worth noting, as you soon begin to have flashes of the scene on board as the plane was crashing. The most grisly of these takes place in the cockpit, where you get to relive the action as the pilots spot the massive mushroom clouds erupting in the town before them. Debris begins flying through the air, and you get to ride the plane all the way down to its current resting place.

When you snap back to reality, you notice that your companion has been having similar problems keeping it all together. He’s taken off his mask and is currently suffocating in terror. You grab and shake him to bring him back around before the two of you walk back out into the city square.

There are more shocks in store, both from a flying demon who tries, at first successfully, to carry you off, and your eventual rescue from a pack of those dogs by fellow scavengers armed with flamethrowers. In all, it seems that the horror in the demo is less focused on suspense and more focused on grisly death staring you in the face. Look for the game to be released later next year.