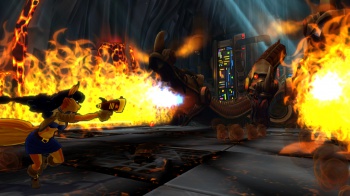 Set after the events of Sly 3, Thieves in Time catches up with Sly after a misfiring time machine accidentally sent the Thievius Raccoonus, a sort of family tree/ninja thief how-to mash-up, into the lost annals of time. Sly’s none too happy about this turn of events, and decides to gather the gang to retrieve the missing pages once again.

One of the cool things about the setting of the most recent Sly adventure is the abilty to control a large swath of characters, from Sly and his love interest Carmelita, to many of the ancestors Sly read about during his old PS2 days when first finding the missing tome to begin with.

My demo featured on a mission titled Eye in the Sky, focusing on a gung-ho 13th century knight by the name of Sir Galeth. Sir Galeth is the raccoon who passed down the rail slide technique via the Thievius Raccoonus. Because that’s his signature move, he’s actually better at doing it than Sly, giving a familiar technique and interesting, and believable, spin. Other ancestors operate similarly, each having mastered their maneuvers far more than the words of the family book could teach Sly.

During my playthrough, Sir Galeth fought through a series of enemies and vertical platforming to a castle of sorts, where we was promptly defeated by a giant three-headed snake. Suddenly, we discover that he was actually being tailed by Carmelita, and the game instantly shifts you into her shoes, suddenly swapping out Galeth’s crook and sword melee, for Carmelita’s dual-wielding pistols.

These sort of character swaps are exactly what keep the game from feeling stale. Each one has his or her own set of special moves that aid in both combat and map navigation. To keep things from getting out of hand from a learning standpoint, each character has similar functionality mapped to the same buttons, meaning that you always keep a general sense of confidence, even while playing as someone new. Certain events and mission will require or trigger certain characters, but each can be selected for general exploration and secret hunting.

From my time with the game, Sly Cooper: Thieves in Time offered well-designed, platforming and action, with enough variance to keep things entertaining and enough uniformity to maintain pace. Fans of the series and newcomers alike should find their time in time a worthwhile experience.