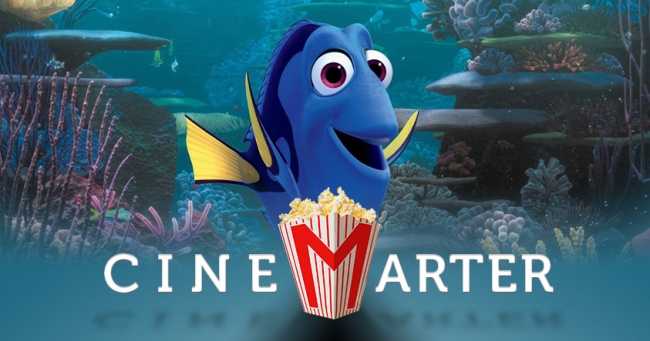 Apparently a large number of people like the Dory character from Finding Nemo, so now 13 years after the original – don’t you feel old now? – she’s getting her own movie. Finding Dory, the sequel to the movie about a dad’s quest to find his son, sees Dory (voice of Ellen DeGeneres), an amnesiac blue fish, start to remember her parents. She impulsively decides to head all the way across the ocean to California in order to find them, dragging along Marlon (Albert Brooks) and his son, Nemo (Hayden Rolence), two clownfish, with her. At one point she gets lost, kind of. Hence “Finding Dory.”

Most of the film takes place in the Morro Bay Marine Life Institute, which is a rehabilitation center for marine life, and also an aquarium for the public. Dory believes her parents are there. She goes on her own little adventure, leaving Marlon and son behind, trying to find her – even though she might not really need finding. Much of Finding Dory exists to showcase how, even with a disability, Dory can succeed in her quest. She’s perfectly able – and in some respects might be more up to the task than her friends. 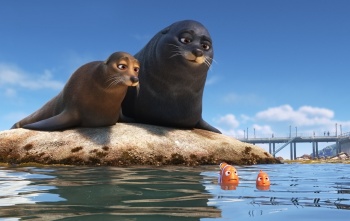 That’s a big step forward. In Finding Nemo, she was mostly comedic relief. Here, as our protagonist, the film’s tone positions her as the hero. For, say, parents who are raising a child with a disability, this’ll be a big deal. Seriously. For an animated movie with a young target audience, this is kind of a big deal. Actually, for movies in general, it’s somewhat noteworthy. It’s also the best thing that Finding Dory has going for it, since a lot of the problems one might suspect that would come from a Finding Nemo sequel are very much present.

There isn’t a whole lot to most of the characters, for instance. Relegating Marlin and Nemo to supporting roles leaves them with little to do, and the film even begins to drag a little when we follow their story instead of Dory’s. Dory’s motivation is strong and relatable, but her character starts and stops with that desire. The film banks on you remembering the last adventure for most of its character work – and with many of its call-backs.

Finding Dory is probably pretty much what you expect it to be: A step down from Finding Nemo, but still more than a serviceable sequel, it makes up a good enough reason to exist and sell more fish-centric merchandise.

The plot is pretty basic, too, with most of its time spent going from Point A to Point B, recalling a key memory to point our characters in the right direction. It’s functional. It never comes close to reaching the emotional highs of Finding Nemo, but it was probably never going to be able to. It also tries to fake us out a couple of times, but it never comes close to succeeding in making us succumb to our gullibility. It feels slight, and like the filmmakers are trying too hard.

Still, the animation is beautiful – even if it is blown out of the water by the short that plays before it, Piper, one of the most gorgeously animated films to ever be made. When Pixar can create feature-length films with that level of detail, we’re really going to be in for a treat. With that said, though, Finding Dory does look good. The animation is strong – there’s an octopus supporting character who’s brilliant – and the backgrounds are colorful and varied. Visually, you’ll always have something to hold your attention.

The vocal work is also strong. Ellen DeGeneres and Albert Brooks are the two main returnees from Finding Nemo, and they pick up right where the left off, just with the amount of work they each do reversed. Newcomers Hayden Rolence, Ed O’Neill, Kaitlin Olson, Ty Burrell, Diane Keaton, Eugene Levy, Idris Elba, and Dominic West are all good-to-great. About the only “bad” vocal work comes from Sigourney Weaver, who narrates the various areas of the aquarium, and it just becomes annoying by the end. “Hi, I’m Sigourney Weaver.” Please, just stop.

Finding Dory is probably pretty much what you expect it to be: A step down from Finding Nemo, but still more than a serviceable sequel, it makes up a good enough reason to exist and sell more fish-centric merchandise. Its story is basic and its characters aren’t great, but its hero’s plight is relatable, the animation and vocal work is strong, it has a few laughs and a couple of good action sequences, and the way it showcases Dory as more than capable makes it worthwhile.

Bottom Line: Finding Dory is pretty good, even if it doesn’t live up to the heights of its predecessor.

Recommendation: This is the animated movie of the moment, so if you’re looking for one, this is the one to go see.