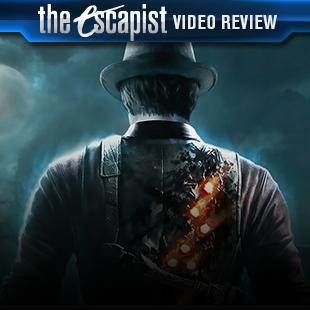 Murdered: Soul Suspect is a game that bills itself as an action-adventure, but in reality, it’s much more akin to an old-school point and click adventure game. That isn’t necessarily a bad thing, but what prevents Soul Suspect from being as good as other notable games in the genre like The Wolf Among Us, is how it fails to do anything significant with its premise. Unlike its protagonist’s murderer, Soul Suspect misses many a mark in creating an entertaining experience.

Set in Salem, Massachusetts, Murdered: Soul Suspect tells the story of Ronan O’Connor, a heavily tattooed, former criminal-turned-police detective. Like all grizzled cops, Ronan has a tortured past (complete with a murdered wife) driving his search for truth and justice, making him come across as a less ornery version of Max Payne. Unfortunately for Ronan, he begins the game dead after having been both thrown out of a fourth story window and shot repeatedly by the notorious Bell Killer. Waking up as a ghost, Ronan learns through some exposition provided by his dead wife that before they can be reunited, Ronan must resolve any unfinished business he has in the mortal realm – namely, solving his own murder and those of the Bell Killer’s victims.

Since Ronan’s a ghost and all, things quickly take a supernatural turn as you delve deeper into the Bell Killer murders and his true identity. You’ll encounter a young medium named Joy who can see Ronan and reluctantly helps him in his investigations, and travel all over Salem in the hopes of shedding more light on the Bell Killer’s motivations. Despite having some plot twists that will be obvious to anyone who knows anything about Salem’s infamous real life history, Soul Suspect does have a decent enough narrative that’s capable of holding your interest from plot point to plot point. The same can’t be said for Soul Suspect‘s other facets, many of which are as coarse as Ronan’s demeanor.

The meat of Soul Suspect‘s gameplay comes in the form of investigations. These events are where Ronan uses his now-supernaturally powered detective skills to look over a crime scene, or find an important plot MacGuffin. Sadly, most of these investigations involve little more than hunting for clues and solving a deductive reasoning puzzle or two. They can also quickly become unduly frustrating when the game decides not to highlight an important object until you’ve looked at it in just the right way. You don’t even have to find all the clues to solve a particular mystery, since more often than not you can just brute force your way through merely by picking random topics until you hit the right combination. It was a real shame to realize that after several different investigations, I was encountering the same types of easy to solve puzzles over and over. In fact, other than ruining your chance for a perfect score, there’s no penalty for mucking up an investigation. This just about kills any weight behind Ronan’s supposedly urgent quest to solve the Bell Killer murders when you don’t have to worry about any real risk of failure.

Another aggravating aspect of Soul Suspect is what it tries to pass off as action. There’ll be several areas where you’ll have to guide Ronan past a handful of imposing demons out for Ronan’s tasty soul. These sequences often turn into a cat and mouse game where you jump between spectral hiding spots in a bid to stay in one piece while demons scour the area methodically. But the tension of every encounter with these glowing orange menaces dissipates quickly when you realize you can banish demons by getting close and pressing a in a simple button prompt. What should feel like a tense, teeth-gritting side-trip into otherworldly horror ends up coming across more as an annoying chore, and you can’t help but feel like the demons are there just to pad out the game for a few extra minutes. Plus, much like with the investigations, the game doesn’t always too a good job of highlighting hiding spots unless you angle your view just right, adding an extra layer of exasperation to the whole ordeal.

Aside from pursuing the main story line, there’s a multitude of other things you can do in Soul Suspect that’ll appeal to completionists. There are dozens of collectibles hidden in most locations that you can gather up to unlock a spooky ghost story or historical plaques that reveal tidbits of Salem’s infamous history. There are also a handful of other ghosts that you can assist with moving onto the next world, like helping a man learn if he killed his friends while drunk driving or assisting a jealous woman figure out if her ex-boyfriend was cheating on her before she died. Funnily enough, there’s a ton of “memory fragments” and journal entries that Ronan’s wife apparently left all over town, detailing the romantic life and backstory of our spectral protagonist. Heck, you can even possess a cat to reach out-of-the-way areas, with a “Press Triangle to Meow” option that’s funny for all about five seconds. But with nothing really rewarding other than the feeling that “Hey, this tale about bodies in water boilers is actually pretty spooky!” the extra side content just feels like extra busy work whenever you want to take a moment away from the main story.

At first glance, Murdered: Soul Suspect feels like it almost had it all – an engaging story, challenging puzzles, tough action and a good amount of side quests to round everything out. But that all quickly becomes as transparent as Salem’s undead population when you realize Soul Suspect‘s attempts to stand apart are lackluster at best. It’s not the worst adventure title out there, but it’s really, really hard to recommend it to anyone.

Bottom Line: Murdered: Soul Suspect has some neat concepts, but it is not a success. A few elements of its supernatural murder mystery may hold your interest, but it ultimately feels hollow because it lacks any real challenge or entertainment in solving that mystery.

Recommendation: Murdered: Soul Suspect isn’t the worst adventure game out there, but there are much better titles in the genre to pick from.