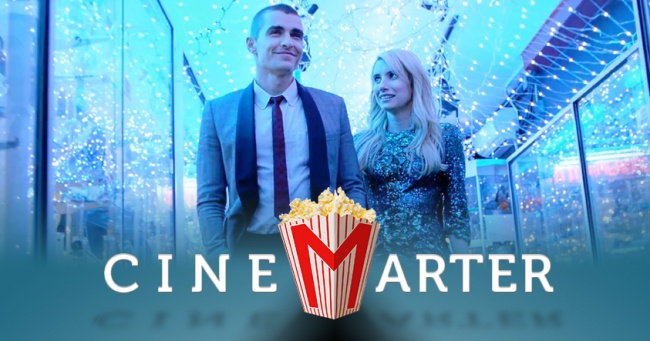 The movie you wish your middle school guidance counsellor would’ve shown, Nerve is a film that aims to warn against the dangers of peer pressure, cyberbullying, social media, and both online anonymity and fame – both sides of the coin. It also makes you think about taking risks and putting yourself out there – the positives and negatives, and the extent to which one should get out of his or her comfort zone. It’s the type of movie that provides moderate thrills for most of its running time, wraps up with a big “message” moment, and ultimately isn’t going to have much impact on anyone, except for teachers who will see it as a way to relate to their kids. Or as a way to take a 90-minute break. Seriously, when Nerve hits home video, it very well might wind up being shown in schools.

The idea behind Nerve is a decent one. There’s a viral game being played called “Nerve,” which sees players perform dares for money, all while people pay to watch them. So, like a dangerous version of Periscope, I suppose. Our lead is Vee (Emma Roberts), who only signs up after being pressured into doing so by her best friend, Sydney (Emily Meade). The first couple of dares are innocuous; they get increasingly more deadly from there. Vee eventually finds herself teaming up with Ian (Dave Franco), and the two of them have to either win or lose everything. Everything! 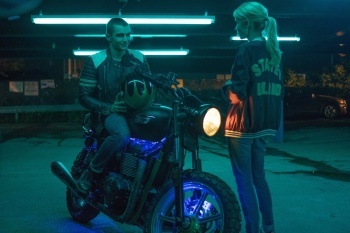 So, yeah, it’s a high-stakes game of “Truth or Dare,” and there’s a more sinister plot afoot that traps players in the game if they break the rules or just because. As a way to provide the audience with a taken-to-the-extreme version of real world tools, that’s not a bad one. And it helps that, for the most part, the teenagers in the film actually act realistically, both with the way they talk and the way they use technology – save for the way Vee’s MacBook sometimes transforms into a touch screen.

The dares themselves range from banal to thrilling, although only a couple of them come across with the appropriate gravitas by the film. One of the most dangerous, for instance, involves a blindfolded motorcycle ride. But the film never presents it as all that big of a deal. It’s more of a lark. It’s only once we start getting to height-based dares – walking across a ladder between two apartment buildings, dangling from a construction crane, etc. – that it starts to really ramp up how serious of a situation the characters are putting themselves in.

Of course, it’s easy to dislike or discount Nerve as “stupid people doing stupid stuff,” which is true. None of these characters are all that smart, and the problems they face are largely their own doing. But do you know to whom that applies in real life? Teenagers! Not to this extent, of course, but some of these things happen! And almost all of the primary characters in the film are presented as teenagers. Its cautionary message works because of that.

And what a message it eventually is. Outside of the whole “don’t do stupid stuff because people tell you to,” which is always present, the film actually stops in order to have Emma Roberts stand up against a crowd in order to tell the anonymous egghead trolls of the internet to cut it out. That’s not something we hear enough of, especially in the age in which we currently live.

The acting is nothing more than passable – although it doesn’t need to be much more. Emma Roberts and Dave Franco make an amiable pairing, which is important both for the plot and for the audience to care whether or not they win. Juliette Lewis shows up as Vee’s mother, seemingly the only parent in a slew of friends. Emily Meade gets jealous of her bestie, Miles Heizer is the typical “has a crush but won’t say anything” friend, and Kimiko Glenn is just all-around helpful. The leads are the only ones who get any depth or development, and it’s shoe-horned in to the point where it feels artificial.

Nerve is a mediocre thriller that works effectively as a cautionary tale and gives you a little more to think about than the average film – even if its ideas aren’t exactly challenging. It has a good premise that provides modest entertainment, the actors are passable, and its message – particularly as delivered near the end at the anonymous eggs of the internet – is a good one. This is the type of movie that’ll work perfectly as a cautionary tale for middle school children. As for the rest of us? It’s just okay.

Bottom Line: A passable movie that will get more play to a younger audience, Nerve isn’t great, but it easily could have been worse.