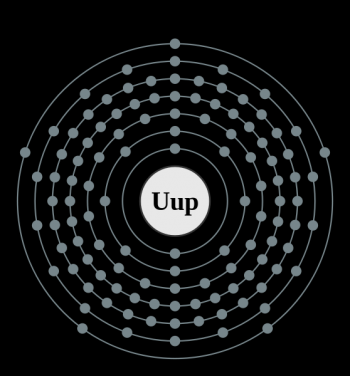 The new element hates the term superheavy, it prefers to be called “proton-massive.”

New evidence for the existence of a superheavy element has been found by Swedish scientists at the GSI research facility in Germany. The element, atomic number 115, is highly radioactive and only exists for a few seconds before decaying into lighter atoms. The element lives in the section of the periodic table reserved for elements that have only been synthesized in laboratories and which, thankfully, my chemistry teacher never required us to memorize.

A team of Russian scientists first reported the synthesis of a superheavy atom with 115 protons in 2004, but independent study was required to confirm its existence. To recreate the element, a team of Swedish scientists projected a beam of calcium ions, made up of 20 protons, at a thin film of americium, consisting of 90 protons. When the two collided, the atomic nuclei combined to produce a few short-lived atoms with 115 protons. Since element 115 only exists for mere moments, scientists used a special detector to compare the energy signature for the x-ray radiation to the energy the element was expected give off as it quickly degrades. “We observed 30 [atoms] in our three-week-long experiment,” study researcher Dirk Rudolph, a professor of atomic physics at Lund University in Sweden, said in an email. The Russian team had detected 37 atoms of element 115 in earlier experiments.

The element, temporarily named ununpentium, was created at the GSI research facility in Germany, where six other elements have also been discovered. By synthesizing superheavy elements, scientists hope to discover new elements with advantageous qualities that can be used for practical purposes.