NOTE: The following article does not contain spoilers for The Dark Knight Rises.

I’m endeavoring to tread as lightly as I possibly can when it comes to spoilers for The Dark Knight Rises this first week, but I don’t think I’m exactly giving up the game to say it’s extremely unlikely that the series – not the franchise, but this specific iteration of it – will be continuing. Christopher Nolan’s Batman movies have been largely about stripping the character and his world of any comic book trappings that might be holding it back from the realm of serious drama. One of those things (from the perspective of Nolan’s films, at least) is the genre’s inherent episodic endlessness. Rises is meant to be (and has been promoted as) the rarest of superhero movie subspecies: the one that provides a definitive ending rather than the obligatory “to be continued.” Please note, aforementioned spoiler-dodgers, that forgoing a “to be continued” ending isn’t necessarily the same thing as rendering continuation functionally impossible (Translation: No, I didn’t just tell you how the movie ends).

Regardless of whether or not he pulled it off, that’s a gutsy move for a filmmaker playing in this sandbox, even one with as much box-office clout as Nolan. Superheroes are the new Cowboys, the go-to symbol of mythic heroism at the movies and most popular action subgenre of the era and Batman is the most popular (individual) hero in the box. Ending the story of “his” Batman is a bold move for Nolan because Warner Bros. would much rather have the franchise continue ad-infinitum. Which is why it came as no surprise that Warner Bros was openly talking about “re-inventing” Batman (“re-inventing” being what you call “rebooting” now that “reboot” is a dirty word) a full year before Rises even came out.

Bottom line: Sooner than later, there will be more Batman, likely in the form of a new series of Batman movies. The only thing that can be safely surmised about it is that it will almost certainly be a more “traditional” superhero experience to better gel with Warner’s plans for an Avengers-style shared universe for the various members of The Justice League.

With that in mind, your humble correspondent here presents several suggestions for how such a reboot might best be accomplished, along with a heartfelt and sincere thank you and goodbye to my readers as I fully expect Warner Bros. will momentarily be whisking me off to Hollywood to shower me in money for the rights to these brilliant pitches.

In comics fandom, the Silver Age refers to the period of publishing between the mid-1950s and 1970s, roughly framed by the re-establishment of the superhero genre beginning with the debut of DC’s new “The Flash” in 1956 and ending with Marvel Comics’ “The Night Gwen Stacy Died” in 1971 (the latter being seen as the most-visible acknowledgment of the new reality of a growing teen and college-age readership). In current parlance, it’s a shorthand for comic writers (and more recently videogame designers) to indicate that they’re doing something more in line with the general “before the 90s” swath of comic visuals.

At this point the “Silver Age Revival” thing is so pervasive that going that route for the movies (elaborate supervillains, boy sidekicks, storylines adequately described as “capers”) would basically be playing follow the leader, but it’s hardly the worst idea in the world. If nothing else, it’d be a trip to see blue and gray Batman, Robin and all the other “not dark enough for the movies” elements getting the big-screen workout, possibly alongside some of the more off-beat nemeses like Man-Bat or Mad Hatter.

And if you do it soon enough, you’ll probably be greeted with great enthusiasm by batfans who’re currently under 10 and spent the first hour of Rises wondering where the hell Batman was.

Take It to TV

Movies are expensive. Actors are human and get busy. This makes setting up a multi-film franchise difficult, and setting up a multi-franchise franchise nearly impossible. You want a ready-made Batman waiting on deck for Justice League while you introduce/re-introduce people to Wonder Woman, Superman and the rest. I get that. But does it have to be a movie?

TV is big business right now, especially episodic genre material. Game of Thrones, much? True Blood? Heck, Doctor Who, once the definition of cult-obscurity in the U.S., is suddenly must-see TV for scads of Netflix-marathoning mainstream viewers. Batman is almost ridiculously well-suited to this landscape (a superhero, a huge supporting cast and it’s a crime-procedural?) and you could keep him active for less money than a movie while everything else falls into place. 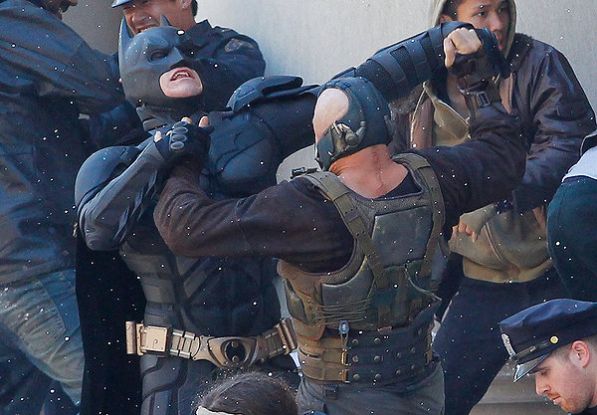 I’ve probably thrown this one out before, but hear me out anyway. Why does Batman have to come back in (or be the star of) specifically a Batman movie?

Robin the Boy Wonder has been (unfairly, in my estimation) treated like a hindrance personified for the last few decades’ worth of Batman adaptations, his punishment from the Gods of Fandom for putting to bed their fixations on the post-Frank Miller “gritty psychopath” Batman being the one true vision of the character. But to a younger generation of fans just now reaching their teens (and their prime disposable income years) he’s been handily rehabilitated in his own right. He was the leader of The Teen Titans, after all.

Might as well give the kid his own movie. If nothing else, it’s probably better than trying to fit his origin into the B-story of a Batman film, and you’d get to have Batman as a supporting character where he can enter the story, do something cool, and exit whenever a shot in the arm is needed. Then, if this Batman goes over well … hey, cool! You’ve got yourself a Batman ready for his close-up! And if not, you can recast him, since it’s not like he was the main character this time.

It’s going to be nearly impossible to make another Batman movie in the same continuity as Christopher Nolan’s now-concluded trilogy. Again, not because of anything that happens or doesn’t happen in Rises, but because they were designed to resist that kind of continuation. It’s spelled out explicitly, over the course of three films, that this is not a Gotham City where a hundreds-strong rotating crop of costumed criminals flit in and out of Arkham Asylum requiring nightly Batman battles, or where similar activities bedevil similar vigilantes in other cities across the country. This was a self-contained story, it’s been told, the Cat Lady has sung.

But, then, there have been plenty of sequels to stories that were supposed to be over. Usually ill-advised, I’ll grant, but there’s precedent. The first Matrix ended decisively with Neo having become an all powerful digital god The Machines can’t possibly stand against … until The Matrix made enough money to demand a pair of sequels, and suddenly “all powerful” became a relative term.

So, yeah. You could try and “soft-reboot” the Nolanverse Batman into the bigger DC Universe people are assuming/hoping will be kicked off by Man of Steel. It would be difficult. It’d take some screenwriting gymnastics (no, I won’t say how much) to get things back into place, and even then The Batman available to you still might not truly fit the “classical” version you want on that Justice League poster. Most of all, though, you’d probably have to do something really, really nice for Christopher Nolan to get him to publically “okay” your actions lest his teeming (and increasingly scary) fanbase damn the film before it came out.

Batman movies are a license to print money. I get that. He’s the only DC Universe hero who’s been a proven box office draw since the 80s. I get that, too.

But the fact is, in terms of getting the rest of the DC stable into theaters, his reliability has become a crutch and a resource hog. You (Warners) are now on your second try in under a decade at making Superman movies work again, and fixtures like Wonder Woman or The Flash aren’t going to be any easier. Maybe another Batman isn’t where you need to be diverting your time and money at this stage, reliable hit or not.

At this point, everyone knows Batman. Everyone knows what he’s about. Everyone knows his backstory, supporting cast, rogues gallery, etc. He’s the only guy who can turn up in a Justice League without anyone wondering who he is or why he’s there. So you might as well knuckle down and get the rest of the house in order … Batman will be there when you need him.

And, if you must bring him back beforehand, there’s nothing that says that he has to reemerge in his own dedicated movie. If nothing else, Bruce Wayne is more than wealthy enough to jet around the world showing up toward the end of other peoples’ movies with invites to a get-together … Just sayin’.