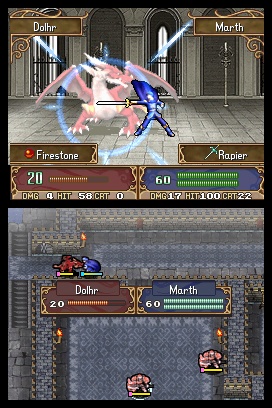 When Super Smash Bros. Melee first shoved pretty boy duo Marth and Roy onto Western shores with little more than a couple of nametags and a kickin’ theme song, gamers tried to accommodate the pair, but weren’t quite sure what to make of them. Here in the Future Year of 2009, though, Fire Emblem‘s guerilla grasp at indie success has transformed into a major label phenomenon, with all the fans, alcohol, and embarrassing public appearances such status brings. So of course, a fond look back at the series’ humble beginnings is just what the doctor ordered, right? Well, kinda.

See, Fire Emblem: Shadow Dragon is a few loogies short of being a spitting image of the series’ Famicom originator. And while, for the most part, this can be considered a good thing, the game’s kind of like a bad dye job: a quick glance will blind you with a case of the new-and-shinies, but dig around a little and you’ll discover an awkward mix of brand new additions and dark, matted Famicom roots.

So what’s new? Well, most obviously, Shadow Dragon is a Nintendo DS title, and it sticks its landing on the console about as well as one could expect from a game of its genre. Stretching its legs on the new platform, Shadow Dragon uses the DS’ top screen to display maps and character stats, while its country cousin south of the microphone revels in actual gameplay. The result: an uncluttered setup that’s much appreciated, though admittedly nothing overly special.

Not satisfied with bridging the gap between two whole screens, Shadow Dragon also brings players together through Nintendo’s Wi-Fi Connection. Once online, players can do battle or trade characters, with a system that allows your characters to be replicated at I-can’t-believe-it’s-not-butter levels of accuracy in a friend’s game – or vice versa. Voice chat is also available for those who’ve traded friend codes.

Similarly, the Fire Emblem series’ only consistent central character – its chess-meets-soap-opera mix of turn-based strategy and interpersonal communication – has had its fingernails trimmed and a few eyelashes plucked, but it’s nothing that could be called a makeover. Most notably, characters can now live their childhood dreams of being a fireman one day and an astronaut the next with a quick-and-easy class change system. Don’t have any use for your current class? Just scope out a new one and – one trip to the Medieval Gap later – your life’s back on the right track. Really, it’s a great feature; characters who might’ve otherwise ended up Macaulay Culkin-ing it up while everyone else rode out to battle now have a second shot at relevance, which is nice, since the game hands out cavaliers like a doddering grandparent who thinks you want the same sweater every holiday season.

Nearly as high on the “Do want” scale are mid-battle save points, which allow you to perform a regular save (as opposed to a this-message-will-self-destruct-in-15-seconds “suspend” save) during the heat of battle. However, instead of making the game easier, the feature simply serves to keep your frustration vein from pulsating quite as rapidly when one of your characters suffers from Fire Emblem‘s famously infuriating brand of perma-death.

Unfortunately, not every new feature works as intended in Shadow Dragon. Nestled within the game’s 20-hour single-player mode are a number of “Gaiden Chapters.” These bonus missions provide players with extra-powerful characters and equipment, but only if players meet certain qualifications, usually pertaining to the number of characters who have died under their unacceptably sloppy watch. As a result, the game tends to encourage failure, while also dangling two separate carrots above the noses of obsessive, gotta-catch-’em-all maniacs and then yanking one away (at least, until a second playthrough) after they’ve made their choice.

On the other hand, for those who think a “Fire Emblem” is just what the kids are calling blazers these days, Gaiden Chapters – along with a normal difficulty level that’s less like previous games’ atomic wedgies and more like a light punch to the shoulder – are undeniably appealing. Plus, it’s not like the difficulty level is a deal-breaker; enemies still throw down well enough on normal difficulty, and with a total of six difficulty levels, all but the craftiest of Fire Emblem vets should be able to find a Road Runner just fast enough to outsmart their Wile. E. Coyote.

Difficulty and complexity, however, certainly aren’t one in the same, and that’s where Shadow Dragon falters. Marth and co. may look right at home on the DS’ two screens, but a few stalwart series features failed to make the jump. Foremost among them, support conversations – which allowed characters to bond and gain stat boosts through in-game chat sessions – are out, ravaged by a simple, no-frills plot about teamwork, destiny, and other such things that’s short on standout characters and set pieces. Also, while the series’ ever-reliable rock-paper-scissors-style weapon-triangle is back, the same can’t be said for its magic equivalent.

Similarly, Shadow Dragon‘s battle animations are emaciated, withered husks of the animations seen in other portable entries in the series. For instance, Mr. Myrmidon, you used to leap and soar through the air as though your blade cut right through the immaterial force of gravity. Now you just walk forward, move your sword like you’re buttering toast, and skulk away. What happened to you?

Really though, my occasional quibbles with Fire Emblem: Shadow Dragon are mere blips on the radar when matched up against my love affair with the game. It may not slice, dice, and make Julienne fries, but it’s still addictive fun, and a nice entry point for beginners to boot.

Bottom Line: Fire Emblem: Shadow Dragon isn’t the ultimate execution of its particular form, but it’s damn close. A few missing features and a substandard plot do little to kill the life in this party.

Recommendation: Buy it if you enjoyed previous Fire Emblems. Rent it otherwise.

Nathan Grayson just about lost it when Shadow Dragon’s prologue required him to sacrifice a character.