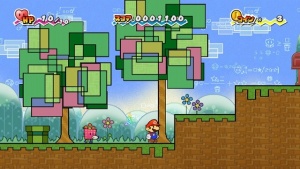 Were it not for the current dearth of AAA Wii titles, I might not have played Super Paper Mario at all. In fact, I would have much rather seen new IP from Nintendo, instead of the reworking of a safe, familiar property. As far as I was concerned, Mario and his friends probably weren’t worth much more of my time.

My first impressions weren’t good, either. Super Paper Mario starts out with a truckload of bland, fluffy exposition delivered via several tedious minutes of text dialogue. The town of Flipside, where the game begins, is dull and charmless. And the game’s main feature, which allows Mario to “flip” the traditional 2-D world by rotating a third dimension into view, at first seemed like little more than a gimmick.

An hour in, I was thinking I might have seen enough. I stuck with it, though, and slowly the game began to reward my patience. 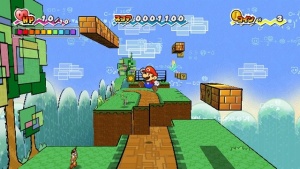 Although Super Paper Mario may not be an RPG proper, it certainly benefits from the genre’s tendency to offer a steady series of gratifying, game-enhancing rewards. Mario constantly discovers and adopts helpful creatures called “pixels,” each of which offers a new skill, such as bomb-dropping or enemy-throwing. Mario’s adventuring party also grows to include three other swappable, playable characters, each with their own unique abilities. Princess Peach, for example, can use her parasol to drift long distances and shield herself from overhead attacks.

As in the Zelda and Metroid franchises, each new talent the player earns is immediately put to use in new scenarios. Mario’s ability to flip open the world adds a hide-and-seek element to the traditional side-scrolling environment and makes for some unique, entertaining puzzles. Super Paper Mario demands and rewards both experimentation and exploration. 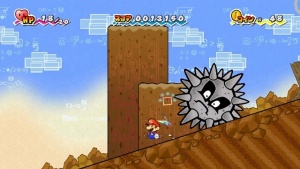 It’s a great formula, smartly employed in a series of charming and beautiful environments that are a far cry from the humdrum hub-world of Flipside, where Mario must return on a regular basis. Unlike Flipside’s unfortunate farrago of half-baked ideas, the external worlds where the real game takes place each offer a unique, vibrantly-realized adventure.

Likewise, Super Paper Mario‘s lackluster introductory story is totally unrepresentative of the rest of its writing, which is often hilarious. High points include an encounter with an obsessively geeky boss character, in which the writers leave no nerd stereotype un-lampooned; a lengthy series of duels with histrionic samurai prone to surreally grandiose pronouncements; and a mission involving a pert, cheeky princess with a penchant for Shakespearean turns of phrase. 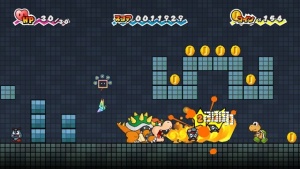 Super Paper Mario is also rife with clever homages to the legacy of the franchise, often marked by mischievous, good-natured satire. Mario’s plumber garb, mustache and portly physique, for example, are the constant targets of lighthearted ridicule, especially from other characters. There are also a few grin-inducing recreations of familiar Super Mario Bros. environments that can be re-experienced “flipped” into 3-D.

The game’s reserves of charm and wit easily compensate for the occasional moments of tedium, usually brought on by short segments of repetitive platforming or backtracking. They also help cover for the occasionally counterintuitive puzzle and the sometimes frustrating camera controls.

My only major complaint about Super Paper Mario, though, is the curmudgeonly gripe I tend to level at any recent Mario title: It’s a new look at an old franchise, rather than an attempt to apply Nintendo’s expertise in a fresh direction. Super Paper Mario offers every reason to believe Nintendo’s wellspring of first-party talent would be well-applied in the service of new characters, worlds and stories. Ironically, it also offers every reason to look forward to another Mario game.