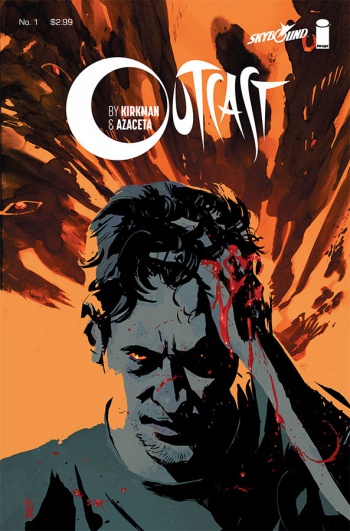 Summer is a great time for comics, whether you’re sitting in the shade thumbing through a stack of new issues, digging back into old favorites saved from obscurity in a parent’s basement, or sipping lemonade and flipping through the latest digital issues on a tablet. In this Comics Collection, Marshall checks out Walking Dead writer Robert Kirkman’s new series Outcast, and digs into superhero union relations with C.O.W.L. #2. This month, Marvel has ramped up the hype train for Guardians of the Galaxy with two new series. I cackle gleefully over the adventures of Rocket Raccoon #1, and get tangled in the mess that is Marvel’s galaxy in Legendary Star-Lord #1. I also check out the supernatural mysteries at the Lumberjanes summer camp. Stew reports on the continued excellence of Thor: God of Thunder and Moon Knight, a long-awaited issue of Superman Unchained #7, and gets absorbed by the gorgeous art of Eye of Newt #1.

Robert Kirkman has done pretty well for himself in the zombie apocalypse and superhero genres, but now he’s trying something else on for size: demonic possessions. Kyle Barnes has seen two women in his life possessed by demons, but somehow found a way of purging the evil spirits. With no “witnesses” to what happened however, Kyle was simply accused of beating his loved ones senseless, and now lives alone in a self-imposed exile. That all changes when Kyle’s old minister comes to him with a new possession case, hoping that whatever he did years ago will save a young boy. The first issue starts off strong, with interesting characters, a lot of unanswered questions, and a story inspired by real-world demonic possession accounts. Fans of Kirkman’s work will probably check this out in principle, but even if The Walking Dead‘s not your thing, Outcast‘s tone and writing style is noticeably distinct from his zombie epic. It’s also genuinely creepy, both in terms of subtle demon presences and how society at large (specifically Kyle’s police officer brother in law) views him during day-to-day life. The first double-sized issue tells a standalone story but Kirkman’s afterword suggests that Outcast will have a much larger scope going forward. If you’re up for a comic-book alternative to The Exorcist this should be worth checking out. 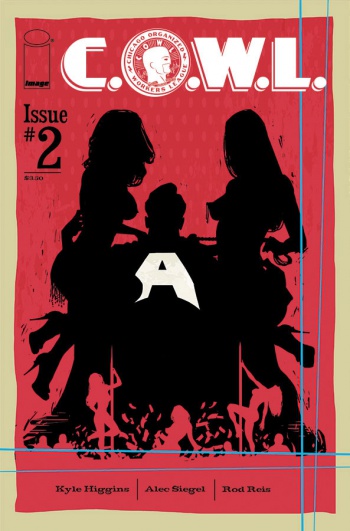 We’ve seen superheroes used as metaphors for a great many things, but I believe this is the first time they’ve been represented in the context of labor unions. Set in 1960s Chicago, C.O.W.L. takes places fifteen years after superheroes form an organized league to better confront metahuman crime. But after the defeat of the last great supervillain in Issue 1, the Chicaco Organized Workers League now must justify its contract renewal while an operative seeks corruption within the ranks. C.O.W.L isn’t outright saying unions are good or bad, at least not so far; it is an ongoing series, so I’m sure multiple sides will explored. But it does seem to suggest that without a distinct threat to confront, a superhero union runs the risk of becoming its own worst enemy.

Big picture issues aside, I do find myself wanting to see more of the low-level members of C.O.W.L. The street-level units that patrol Chicago could help C.O.W.L feel like a 1960s version of Powers, a very exciting enough prospect indeed. There’s a lot of potential for the series moving forward, and a great many characters to introduce, so here’s hoping the rest of the first arc proves it’s worth following.

Favorite Moment: “Help me pick this guy up and we’ll call for back”
“F**k it.” 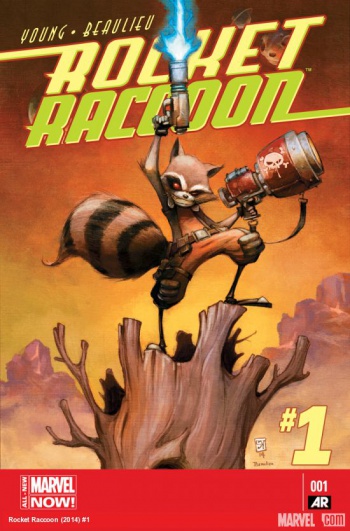 Marvel is keeping the hype pressure on with two new ongoing series starring members of the Guardians of the Galaxy this month. First up is Rocket Raccoon, the gun-toting, smack-talking space rascal. Written and drawn by Skottie Young, this first issue seems like it leapt fully formed from Rocket’s own mind. In the middle of attending a packed stadium to see Groot in a wrestling match, Rocket’s date starts sour and gets worse when the authorities show up to arrest him. Rocket has been framed for a series of crimes, and it’s tough to dispute video evidence when you’re the last of your unique-looking kind. His heroics over the years have earned him some unlikely enemies, and now they’ve teamed up to take him out for good.

The issue is packed with Saturday morning cartoon-colors, reckless explosions, big action panels, and gags. Young captures Rocket’s frenetic feel in both the fantastic art and the laugh-out-loud script. This is a great starting point for new fans of the Guardians of the Galaxy, though just because Rocket looks cute and cuddly doesn’t mean that is necessarily a kid-friendly book. Rocket’s got a foul mouth (though bleeped) and there’s more than a few gunfights and piles of gooey guts in this book. The first issue sets up a great story, and I can’t wait for the next issue. 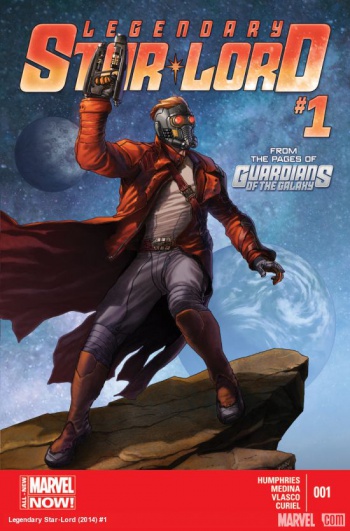 Legendary Star-Lord is the second Guardians of the Galaxy spin-off series from Marvel this month. Peter Quill is a good-hearted scoundrel, and finds himself in trouble at the hands of a squad of Badoon, a reptilian alien species. The Badoon are after the Mandalay Gem, a valuable and powerful mineral which has been hidden in an orphanage. Star-Lord was after the gem himself, but he ends up captured and outgunned by the Badoon. While Peter wrangles his way of this mess, we also get a cameo of X-man Kitty Pryde, and are introduced to a new character, Captain Victoria, Commander of the Spartax Royal Guard.

Unlike Rocket Racoon, the tone is little heavier, giving us glimpses of Peter’s tragic loss of his mother as a child and packing in a lot of Marvel universe lore. There’s still great wisecracking and gags in this book, but the motivations and characters are a little more grounded. This issue is also less forgiving to new fans than Rocket Racoon #1. A little time spent on the Marvel wiki will fill you in, but if you’re unfamiliar with Peter Quill’s backstory and the galactic goings-ons of the Marvel universe as a whole, some of the depth story will be lost on you. 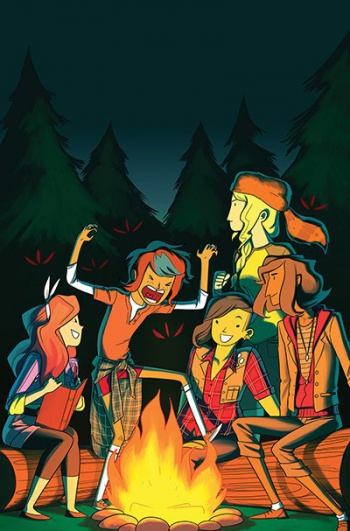 The Lumberjane scout camp for girls has some odd creatures living in the forest nearby. Sea monsters, three-eyed foxes, and now yetis have stood in the way of five best friends trying to decipher the mystery of the Bearwoman and the lights in the woods. Jo, April, Mal, Molly, and Ripley discovered last issue that the warning delivered by the three-eyed foxes, “Beware the kitten holy”, was an actually an anagram for “In the tower by the lake.” The girls’ scout leader Jen is keeping a close eye on the girls, but when the troupe stumbles on a boy’s camp near the lake, the girls take the opportunity to sneak away and explore the tower.

This is quickly becoming one of my favorite new series. The characters are nuanced, every strange creature delivers a new take on the mythological beasts that inspired it, and the art is bright and lively. The casually magic forest is a great setting, and though Jen is only beginning to realize that the girls’ stories of monsters are true, there are hints at a much bigger story going on behind the current mystery. The boys’ camp is certainly more than it seems, and Lumberjanes camp director Rosie definitely knows more than what’s she has let on. There’s a lot going on here, though, so new readers will want to pick up the back-issues (and I found myself needing to re-read previous issues to keep everything straight).

Favorite Moment: “I am going to catch a fish by wrestling it away from a bear.” 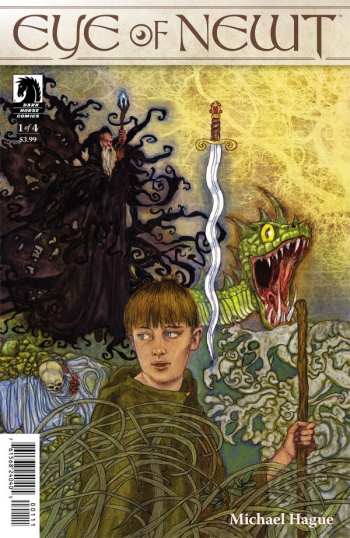 Eye of Newt is probably the most expositional comic I’ve ever read. There’s barely a page that doesn’t introduce some new element and the dialogue of some characters seems aimed entirely at spitting out world and plot details that another book might spend several issues slowly introducing and building up. It’s a rapid fire approach that initially put me quite off. That being the case, the deeper I got into its story of wizard’s apprentice preparing for a dangerous trial, the more I found myself enjoying it. The writing has a classic sensibility that almost reminded me of Tolkien. It also doesn’t hurt, of course, that Eye of Newt‘s art is almost distractingly gorgeous. If you’re a fan of high fantasy, give this book of a try.

Favorite Moment: “It is a place of dreams and nightmares.” 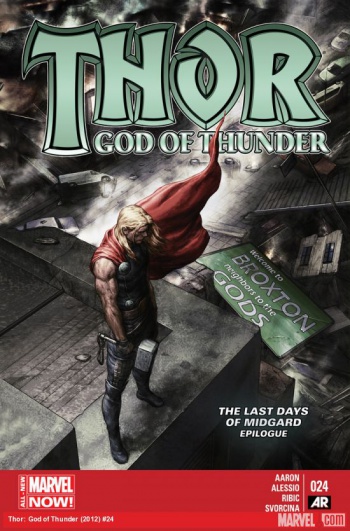 Last month I reviewed issue #23, which saw an end to the dual conflicts of The Last Days of Midgard. Issue #24, in turn, is a somber aftermath book that explores the consequences of the past arc. What I liked most about this issues was basically just how well it resolved the loose ends of the story, implemented some big changes for Thor and the Asgardians and also opened doors to further conflict. All in all, it’s a solid issue and a fitting close to a story that, overall, has been one of my comic reading highlights for 2014.

Favorite Moment: “I am not worthy of this world.” 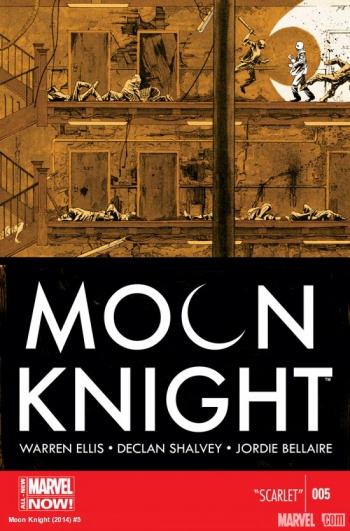 I’m thinking this is going to be the last Moon Knight book I recommend for awhile. Not because there’s anything wrong with it, but rather because the series has been consistently excellent that if I keep going Ibm probably going to wind up telling you to buy ever single new issue until the end of Warren Ellis’s run. That being the case, issue #5 is another practically perfect self-contained story that sees the titular hero fighting his way up a multi-story apartment building a la The Raid to rescue the kidnapped daughter of a crime boss. The writing is minimalistic, the action is exciting and the art remains gorgeous as always. If you’re not reading Moon Knight yet, the time to start was five months ago.

Favorite Moment: “You could use that gun on her now. But she’s the only thing keeping you alive.” 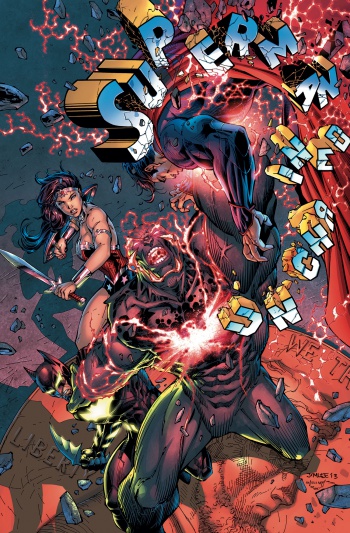 While DC has been far more focused on advertising the fact John Romita Jr. is now working on the main Superman series, my biggest bit of recent excitement when it comes to Man of Steel matters is the latest issue of Superman Unchained. Scott Snyder’s take on the character can perhaps be a bit full at times when it comes to ideas, but it’s always been an excellent read and continues to be with issue #7. You’ve got Superman duking it out with the US Army (and actually getting his ass kicked). You’ve got Batman and Wonder Woman barely holding their own against the series’ baddie Wraith. It’s just a fun book in a series that really needs to release at a more frequent clip.

Favorite Moment: “The choices I make about when I fight, how I fight, how I live my life inside and outside of this… Those choices mean that Superman, as I’ve created him, he can’t last forever.”