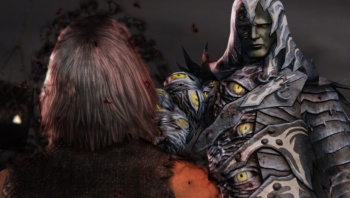 Soul Sacrifice follows in the same vein of a number of action RPGs, like the Souls or Monster Hunter series, where complex game mechanics trump pretty much all the other aspects of the experience. Like those games, Soul Sacrifice requires a certain sensibility in its players in order to truly enjoy it, you need to be willing to meet the game halfway and learn its ins and outs, not all of which are presented in a perfectly straightforward manner. If you’re the kind of player to work past these barriers, then Soul Sacrifice will be a game that drains your time as you delve into the character customization, deep gameplay and creepy story.

True to its namesake, Soul Sacrifice‘s core gameplay and narrative center around sacrifice. The game opens with some poor soul being killed by presumably the primary antagonist. He’s got extra eye-balls all over his body, which is a sure sign of evil intentions. Luckily or unluckily, your adjacent cell-mate fills you in on the specifics before suffering a similar demise. The guy with the extra eyes is Magusar, a sorcerer who needs a fresh supply of living sacrifices, and you two are next. After Captain Exposition bites it, the player character happens upon a talking necronomicon-esque grimoire buried under some of the rubble. The book informs you that it’s actually a journal of another sorcerer who used to travel with Magusar, and that by reliving their past adventures and deeds the player could acquire the power to defeat Magusar. After the introductions, the story takes a more measured pace, and as you page through the book, simple animations, text and dialogue will appear to spin the tragic tale of the lives these sorcerers led. In this world, sorcerers are a bit of a necessary evil. They travel the world exterminating monsters, some of which used to be human, but their power has its cost.

At its core there are really two major elements to understand and master in Soul Sacrifice, saving versus sacrificing monsters and allies, and managing the offerings that fuel your spells. Every monster you defeat will return to its previous form, be it cat, raven or a sorcerer gone off the deep end. You’ll be given the option either to save or sacrifice them, which has a number of implications. In the short term, saving normal monsters will regain you a small amount of life and sacrificing them will refuel your spells. Allies, both NPC and online, are handled a bit differently as saving them will require you to give up half of your current health, whereas sacrificing will enable a devastating magic attack. As you progress through the game you’ll level up and your tendency towards divine, dark or neutral will unlock additional customization options. On the whole, the saving/sacrificing has a number of interesting gameplay mechanics tied to it. The only downside is the required clean-up after every fight where you move from body to body to prompt the same animations of saving and sacrificing opponents. 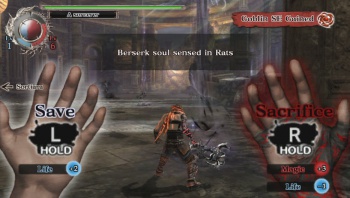 Offerings are the items that fuel your magic, continuing the ever present idea of power at a price. Your character can equip six offerings at a time, and each one supports a number of castings of a specific spell. Through the combination of spells and other character customizations, the player is able to dial into some pretty specific styles. Maybe you want to be a long range caster or a brawler who summons magical weapons to pummel foes. Spell breakdown is pretty straightforward; the more advantageous the attack, generally the lower the damage, but also the more times it can be cast before the offering breaks. For example, firing off a trio of homing spinning blades might not do tons of damage, but it can be fired off repeatedly before needing to find a source to recharge. Conversely, summoning a golem can only be done a few times, but it does a massive amount of damage to any enemy unfortunate enough to come near it. There is also a heavy emphasis on combining and fusing your offerings together to either increase their power, improve casting times or make entirely new offerings. This in turn gives you some incentive to replay missions to gather more materials, as it will allow you to power up your favorite spells or experiment with new combinations.

There is another class of spells that you can draw on, however; the Black Rites. Black Rites are powerful forbidden spells and magic that can only be used under certain circumstances, and they also demand a permanent cost. Sacrificing your skin will unleash an inferno, but your defenses will be lowered by 50%. There is however a method for reverting them. The talking journal will occasionally give you Lacrima, which is a bit like magical white out, letting you reset elements of anything written in the book. You can use it to undo Black Rite’s costs or to recover broken offerings. At first this might seem to run counter to the rest of the game’s emphasis on “what would you pay for power,” but it’s still a limited resource. This means you’re semi free to use up all your options instead of restarting or grinding every time it gets too hard.

The only major issues with the whole game were due to the limitations of the Vita itself. A complex game demands some complex controls, and it can be awkward trying to accurately use both shoulder buttons, four face buttons, two control stick and the d-pad depending on how little or large your hands are. Even the basic structure of the levels themselves and entering missions leaves a little to be desired because of the Vita. The storybook narrative works well enough in the confines, but the game itself is ultimately a repetition of the same few arena sized maps and a few retextured enemies. The semi-permanent loss of the Black Rites costs could have been a more compelling gameplay element in an open world where you couldn’t simply undo it as soon as that mission ended. One element that the structure does allow is that you’re free to fight Magusar as soon as you feel you’re up for it. Having the end boss just be an ever present option in an interesting spin on a grindy RPG.

Bottom Line: While the game is a little limited by the platform, the underlying mechanics will capture a certain style of player.

Recommendation: If you like complex action RPGs in the vein of Demons Souls and Monster Hunter then Soul Sacrifice is worth a look.