Everyone’s favorite star-hunting, mushroom-eating Italian plumber is back in Super Mario 3D Land , the latest title for the series that goes back to its roots for inspiration. Surprisingly, it works out very well, though with a few small catches.

Storywise, it’s kind of the same old song and dance we’ve seen at least a half-dozen times before. Once again, Mario’s age-old nemesis Bowser has kidnapped Princess Peach, and it’s up to Mario to defeat Bowser’s minions and rescue her from whatever ill plans Bowser has in store. Though to be fair, the in-game intermissions do show Princess Peach almost making a successful escape attempt, which certainly would’ve been a nice twist. 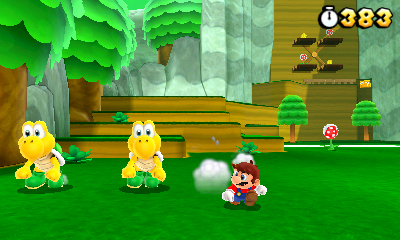 There are eight worlds for Mario to explore, each with about five stages to play through and end in boss fights against one of Bowser’s henchmen, the fist-swinging Boom Boom or boomerang-chucking Pom Pom. The levels themselves are very well designed and look fantastic, regardless of whether you have the 3D turned on or off. You’ll be running and leaping around detailed Goomba-filled plains, icy mountains, and ghostly mansions in your quest to rescue the princess from Bowser. It’s an enjoyable experience exploring each stage and overcoming whatever obstacles it throws at you, whether it’s a handful of tricky jumps or a tower of angry Goombas. One particularly memorable level had multi-colored blocks that disappeared and reappeared in time with the music, requiring close attention to avoid plunging towards an unfortunate end. Another fun and fast-paced stage essentially puts you in the middle of a construction site with buzz saws actively cutting away parts of the level, yourself included if you aren’t quick enough to get to a safe power-tool free area.

A few classic power-ups return, such as the fire flower that lets Mario throw fireballs, but the Tanooki suit from Super Mario 3 is probably the most helpful power-up in the game. The Tanooki suit lets Mario jump up and float down to the ground, giving you a lot more control over some of the trickier platforming parts. As cool as it was to blaze a fiery path of destruction through my enemies, with such a strong focus on hopping, skipping and jumping to victory I liked having more control over my time in the air.

Thankfully, 3D Land doesn’t go overboard with giving Mario a billion stars to collect this time around. No, this time it gives Mario billions of coins to pick up instead. Each stage also has three star-coins to collect, which let you unlock extra levels, but aren’t all that necessary to progress through the main worlds. It’s more of a fun side challenge to locate them all for playing the unlockable stages later on. For the most part when you beat a stage you’ll be able to progress to the next without having to double back, although there are plenty of side opportunities to rack up bonus lives.

It’s a good thing that you’ll have the chance to pick up ludicrous amounts of coins in every level, because you’ll definitely need those extra lives. I wouldn’t describe most of the levels in 3D Land to be especially difficult (except for the secret worlds, but more on that later), but if anything’s going to kill you the most in this game, it’s going to be a poorly placed camera combined with a badly-timed jump. Occasionally, the camera will switch to give you a side view of the game world in a manner reminiscent of the old 2-D days of the classic Mario titles. However, since the controls are designed for use in a 3-D environment, when the camera switches and locks to that side view all it can take is one errant twitch of the circle pad and off the edge you go. It’s not something that happens often considering the wide variety of stages you’ll be working through, but it occurs frequently enough to lose a few hairs over. 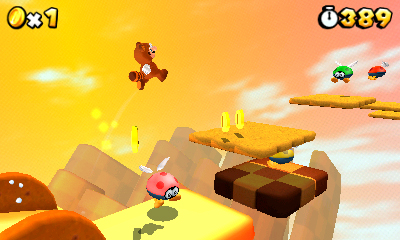 3D Land’s concept of ‘dynamic difficulty’ is another problem. Sometimes games are designed to pick up on if the player is doing poorly and make things a little easier to get players back into the swing of things. 3D Land goes a little too far with it. If you die enough times the first time you try to work through a stage, the game’ll give you a white, sparkly version of the Tanooki tail-suit that makes you impervious to everything except falls off-screen. Initially, this may sound helpful, but it can quickly take the fun out of things once you realize enemies die as soon as you touch them, spikes become scenery instead of environmental hazards, and boss fights become cakewalks. I can understand the idea of throwing players an extra mushroom just to give them an edge, but this feels like overkill. Even worse, if you manage to die a few times wearing the invincible Tanooki suit, you’ll get another power-up you can use to take you on through to the end of the level. It felt a little too much like the game was trying to hold my hand at that point, instead of just encouraging me to pick myself up, dust off my cap, and jump back into the fray.

3D Land makes up for its few shortcomings by having a staggeringly large amount of content available beyond just the eight main game worlds. After I finally defeated Bowser, rescued Princess Peach, (spoilers!) and watched the credits roll, I was surprised to see there were extra levels to play through to help out another prominent Mario character. Sadly, it isn’t Yoshi. I was even more surprised to find out there’s not just an extra handful of secret stages worth another hour of play, there’s almost an entire new game with eight secret worlds and just as many stages as the main story. Even more, a lot of secret stages throw in new game types, such as levels where an evil, miniature ghastly version of yourself chases you around, duplicating your every step. A few stages from the main worlds return with a twist, such as extra enemies or a shortened time limit. Part of me felt that a lot of the new mechanics, power-ups and the like could’ve just as well been present in the primary game, but I can’t really complain that 3D Land has plenty of gameplay to keep me coming back after I’ve defeated Bowser again.

Despite a few odd quirks, Super Mario 3D Land is a great 3DS game that goes back to its roots in being a solid platformer that’s a blast to play, even if there’s the occasional bout of dying a dozen times due to a misjudgment of leaping distance. While it would’ve been nice to see Mario and company in a new story other than the standard “rescue Princess Peach” plot we’ve seen before, the extras and secret stages more than enough make up for it.

Recommendation: Definitely one of the better Mario titles in the series, Super Mario 3D Land is an excellent 3DS title and has plenty to offer any gamer.