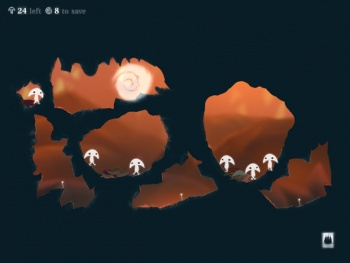 Mega-companies may rule at TGS, but tucked away in a corner were indie offerings selected for the Sense of Wonder Night, also known as SOWN. This program is intended to give small, unconventional games wider exposure. For us, this year’s biggest stand out was a little game called Spirits made by Berlin-based Spaces of Play.

Lush oranges and deep reds glowed behind the dark trees of the forest. Ghostly, mushroom-headed creatures roamed about, and they got our attention. Game designer Mattias Ljungstrom explained that Spirits took its inspiration from the natural world.

Reminiscent of PC classic Lemmings, you must guide the forest spirits across some dangerous territory. To help them get “home”, you can imbue them with one of four different abilities. Two will be familiar to anyone who has played with Lemmings: digging through the earth and building bridges (of leaves, naturally). The innovation here comes from the use of wind: Creatures can call a gust of wind to help companions over obstacles. Conversely, existing wind flows unfavorable to our little mushroom-heads can be manipulated or even blocked entirely.

In its 3rd year, SOWN has introduced a variety of off-the-wall, boundary-pushing games. Of course, most tend to fail. However, The Misadventures of PB Winterbottom, featured in 2008, has found mainstream success. Hopefully Spirits can also cross the indie divide.

Spirits will be released on the iPad, iPhone, and iPod Touch sometime soon.