As a shady interloper from across the sea, the vampire took Japan by storm in the 1930s and his popularity endures to this day. From Castlevania to Vampire Hunter D to Hellsing, the shadowy bloodsuckers show no sign of disappearing from downtown Tokyo. Yet how did Dracula and his ilk, unfamiliar foreign imports as they were, so capture the national imagination? Japanese legend boasts a rich menagerie of homegrown beasts and bloodsuckers; why were they so displaced by the vampire?

Had the Japanese been seeking a mere bloodsucking beast, they needn’t have looked further than the monstrous Kappa. Resembling a scaly cross between a monkey and a turtle, the river-dwelling Kappa is a staple of Japan’s traditional folk tales. The creature is widely believed to have inspired the creation of Mario’s constant enemy, the rather unthreatening Koopa Troopa (‘Koopa’ being a wordplay on ‘Kappa’), but the Kappa of yore was not to be taken so lightly. The beastly river fiend is known and feared for luring unfortunate townsfolk to a watery grave and extracting their blood via the anus. Though, like many legendary monsters, the Kappa has a weakness: its unerring politeness! The source of the creature’s power is the water it holds in a dish-shaped curve on top of their heads. Like the human inhabitants of Japan, the Kappa is generally polite to a fault, so when faced with the beast, you are advised to bow to them in greeting. The Kappa will reflexively bow in return, spilling the water and rendering him powerless.

If it was a shape-shifting, seductive blood sucker they wanted, the old tale of The Cat of Nabeshima provides some juicy material. The story tells of a demonic cat that kills a Prince’s beloved concubine with a bite to the neck. Having buried the body, the cat assumes the young maiden’s form. The Prince, knowing nothing of this, is seduced by the changeling and is, night by night, drained of his vitality. As is the convention in most of these folktales, everything is set right by the timely intervention of a wandering priest. The story later inspired the wonderfully eerie 1968 movie, Yabu no naka no kuroneko (The Black Cat from the Grove). This time, the cats in question are the vengeful ghosts of two women, killed by a roving band of warriors. The pair are cursed to feed on the blood of samurai, luring them from the forest path on lonely nights.

Yet, despite all these homegrown creatures, there was something about the vampire, that shady yet charismatic European aristocrat, which captured the public imagination. As it turns out, the very fact that the vampire was a foreign import was the key to its original surge in popularity.

The vampire is generally considered to have arrived on Japanese shores in the 1930s with the country’s first boom in vampire literature. As Japanese militarism was hitting its peak, so too was xenophobia. This atmosphere of suspicion and paranoia was stoked by the most popular book of the 30s boom, Seishi Yokomizo’s Dokuro-Kengyo (The Death’s-Head Stranger). The tale transplants elements of the Dracula story to Tokugawa era Japan where a mysterious stranger, Shiranui, transforms the Shogun’s daughter into a vampire as part of a plot to bring down the government. The character of Shiranui was based on Amakusa Shiro, an actual historical figure who led a Christian rebellion in 17th Century Nagasaki. At that time, the shogunate worried about the creeping influence Christian missionaries were having on the masses, eventually leading to the religion being completely outlawed and access to the country closed to outsiders. In the book, Amakusa is now a vampire, his deep immersion in Western culture having turned him into a kind of monster capable of spreading his corrupting influence to others. The vampire thus came to serve a function impossible for the homegrown Kappa or the Black Cat, embodying a generation’s fears of seditious foreign influence and the dangers of western ideas. From its very introduction, the vampire became inextricably linked with the Western other and the encroachment of foreign culture. 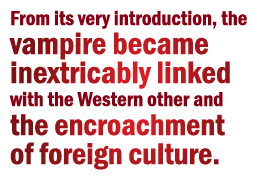 These themes persisted in the post-war period, yet now the foreign vampire was viewed with a little more nuance. In Ryo Hanmura’s Ishi no Ketsumyaku (Veins of the Rock), the vampire brings from abroad a virus, spread by sexual intercourse, which bestows immortality at the cost of a thirst for blood. The story follows two heroes in parallel, a bureaucrat of the elite, assisting the aristocracy in their pursuit of the virus and immortality, and a renegade former operative, intent on revealing the conspiracy. Hanmura came from a generation that had seen two sides to contact with the West. As a child, he had lived through the horrors of war and the humiliation of occupation, yet he had also experienced the benefits foreign ideas and technology had brought to society. As such, his vampire raises questions about the costs and benefits of adopting western mores.

These early depictions of the vampire as a metaphor for the encroachment of Western culture solidified him as the foreign interloper. The vampire was a shady character from abroad, an aristocrat moving in elite circles, spreading his influence to those around him. While media has grown more varied over the years, this initial archetype has led to distinct differences in how vampire stories have evolved in Japan as compared to the West.

In Western fiction, the vampire also began life channeling the public’s fear of suspicious foreigners. After all, Bram Stoker’s Dracula was the mysterious Count from Eastern Europe. With the arrival of the silver screen, Bela Lugosi’s performance further strengthened this link, lending the Count his now iconic heavy Hungarian accent. Yet over the years the western vampire has become absorbed and assimilated. While still mysterious and otherworldly, movies like The Lost Boys shifted the popular perception of the vampire into the modern era. Gone were the flowing capes and cheesy accents. No longer tied to the image of the 18th Century European aristocrat, western vampires could now be both as American and as modern as Kiefer Sutherland in a black leather jacket. True Blood‘s vampire queen might dress like a 20’s socialite and Bill Compton may still speak like an old fashioned southern gentleman, but the vampires of that world are steeped in the culture of the American South. Social class is also generally much less of a factor. Buffy‘s vampires shy away from the idea of class and aristocracy. Her vampires could be anyone from a cheerleader to a bleach blonde Sid Vicious impersonator. Today’s vampires tend to retain the core mythos of their forbearers, but their allure comes from the supernatural rather than the exotic. The modern vampire is as likely to live in a seedy strip club as a gothic castle, and sounds more Californian than Transylvanian. 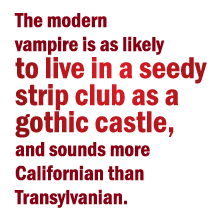 Not so the Japanese vampire. No one would argue that the Japanese don’t play fast and loose with the classic vampire mythology – the vampires in Trinity Blood have their origin in alien bacteria for goodness sake – yet there remains a strong recurring theme of the vampire as foreign invader. Nowhere is this more striking than in Blood: The Last Vampire. Set around Yokota Air Base, an American military outpost near Tokyo, the story draws on long running antipathy toward the continuing foreign military presence on Japanese soil. Controversial incidents perpetrated by American soldiers are represented as the work of vampires hidden among the foreign population.

Similarly, the trope of the vampire as an anachronistic aristocrat, fallen somewhat out of fashion in the West, remains a mainstay in Japan. Hellsing‘s Alucard dresses every bit the Victorian gentleman, while the villains of Vampire Hunter D, obsessed with purity of blood, even refer to themselves as “nobles.” Interestingly, when it comes to heroic vampires, Blood‘s Saya and D himself also have ties to nobility: Japanese nobility. Both protagonists are very closely associated with their swords, a reference to the feudal era when only the aristocratic samurai class was permitted to carry the blades.

Vampire fiction continues to diversify, and every year brings new variations on the old archetypes. Yet distinct traditions are still readily apparent as the bloodsucker’s distinct evolution East and West lends it a different cultural resonance. Tales of the vampire are seldom simply about the supernatural, instead drawing from the cultural mindset of their time and place. Our relationship with the bloodthirsty immortal will ever be influenced by the ghosts of the vampires with which we were raised.

Fintan Monaghan hunts vampires by night, but by day he is a news editor at a 24 hour news channel.