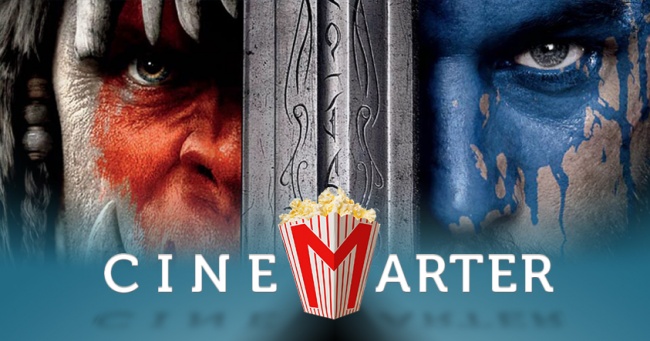 Warcraft – or perhaps more correctly: World of Warcraft – has become such an entity that Hollywood executives with a modicum of power have decided that they’re going to adapt it into a movie. This, despite those who play WoW still winding up as the butt of jokes on shows like The Big Bang Theory or South Park. But those 5 million subscribers and the large crowd of moviegoers who will go see LOTR knockoffs aren’t numbers to sneer at, so now we have a $160 million Warcraft movie helmed by Duncan Jones, who is a tremendous talent.

The film, set in the universe of the video games – primarily in Azeroth, if that matters to you – and contains characters with ridiculous and/or awesome names like Orgrim Doomhammer and King Magni Bronzebeard. The various assortment of fantasy characters are here: orcs, dwarves, humans, mages – they’re all here. The difference between this and LOTR is that the orcs aren’t evil brutes; they’re potentially fully fleshed-out characters, and there’s a degree of moral ambiguity to many of them. “Potentially” being the word used because the film doesn’t really give us a whole heck of a lot to work with, even though we follow them for a good chunk of the time.

And it’s not for a lack of trying. The film has been painstakingly and seemingly lovingly created. Duncan Jones is a great filmmaker and appears to have a genuine interest in the video game property. Blizzard Entertainment, the company behind the games, has a large vested interest in the movie doing well. The studios gave this thing $160 million dollars! You don’t do that if you’re looking for a quick payday. In the Name of the King: A Dungeon Siege Tale is what happens when you’re looking for a quick payday.

For most of Warcraft, we set up what basically served as the plot of the first game: Orcs & Humans. And it takes a long, long time to do so. Fans will mark out, because if you mention something from the game, fans will mark out, while non-fans will fall asleep. There’s so much jammed in here that’s ultimately unnecessary to get across the premise that orcs and humans might not always be able to get along. There’s a lot of attention to detail here, which comes from appreciating the source material, but a lot of it is dull and not required for telling a compelling story.

Faithful to a fault, Warcraft might be the first cinematic video game adaptation that fails because its filmmakers cared too much about the games they were adapting.

Now, with that said, all of the attention to detail means that the things the filmmakers get right are really right. The orcs are amazing, all of the armor and weapons and characters and creatures and spells and areas are all pretty wonderful – or, at least, faithful to the games, which in itself is a wonderful thing. When many of the video game adaptations Hollywood produces wind up only slightly resembling the games they’re adapting, seeing one that wants to strongly to recreate the game franchise at the cinema is noble and a good thing to see. It didn’t work, but it’s still a good sign of things to come.

I know that there already people getting ready to type the words “but we don’t need a good story or characters for a Warcraft movie.” Those people will probably be satisfied, although it’s still heavy on inconsequential dialogue (because of lackluster characters) and light on action in its first half. But shouldn’t you want a good story and strong characters? Don’t the best action/fantasy movies contain those? Why would you want to accept something less? If you just want to be immersed in this universe, you’d be better off playing the games. Movies (for the most part) tell stories, and Warcraft‘s isn’t very good.

The actors can’t do a good job because they’re too busy espousing universe lore. The story can’t get going because it’s stuck setting everything up. It takes forever to get to the action. It always looks great; the various creatures – particularly the orcs – are stunning. But when you don’t care, and when you don’t get invested, it makes for a tough watch. The LOTR trilogy is, what, 12 hours long if you watch the extended cuts? But I’d rather re-watch that again than sit through the two hours of Warcraft. There’s no thinking or caring required when watching Warcraft.

Faithful to a fault, Warcraft might be the first cinematic video game adaptation that fails because its filmmakers cared too much about the games they were adapting. The film is so crammed with lore, and so rigid in its construction, that there’s no room for anything to breathe, and it takes forever to get to the fun bits. Non-fans aren’t likely to care, while fans will appreciate the level of detail – but also hopefully understand how including so much of it might alienate others, and bore those who already know it. Warcraft looks great and it’s been made with love and skill, but it’s sad to say that it only infrequently even comes close to working.

Bottom Line: Warcraft doesn’t work, but you can feel the love the filmmakers put into it. Maybe next time.

Recommendation: It’s not bad enough to say “don’t see it,” but it’s also not likely worth your time unless you’re already a fan of the games.