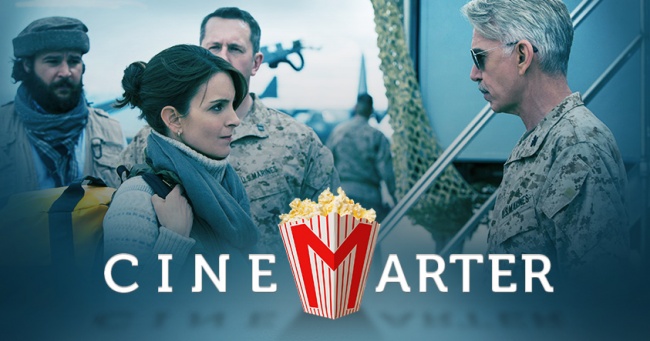 Audiences going into Whiskey Tango Foxtrot are likely to expect a flat-out comedy following Tina Fey and her misadventures in Afghanistan. After all, the marketing has focused almost solely on this aspect of the picture, probably because that’s more likely to sell tickets than “it’s about this woman trying to find herself while away from home, and also there are some jokes thrown in.” For two hours, we sit there hoping for more jokes than are featured in the trailers, and for two hours we find ourselves wanting. Whiskey Tango Foxtrot isn’t a bad movie, but if you go in expecting the movie that’s been advertised, you’re going to be disappointed.

Fey stars as Kim Baker, a reporter who volunteers for a three-month stint in Afghanistan, only to wind up staying for several years. She’s sick of her life in America, and when the opportunity pops up to become a war correspondent in front of the camera – instead of having her talent wasted behind it, writing scripts for the daily news programming – she jumps at it. What she discovers might not lack in intrigue or intelligence, but it does lack in the jokes. 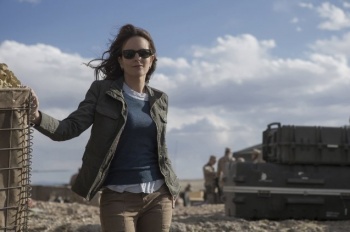 Ultimately, the film plays out over the course of a long period of time and details her interactions with various people. Tanya (Margot Robbie) is a journalist from a rival network, someone with whom she develops both a friendship and rivalry; Gen. Hollanek (Billy Bob Thornton) is the most prominent member of the military she meets; Iain (Martin Freeman) is a Scottish reporter who serves as our primary love interest; Fahim (Christopher Abbott) is her translator and friend; and Ali Massoud Sadiq (Alfred Molina) is local high-ranking official. It’s a good cast and they’re all playing interesting, if underdeveloped, characters.

The idea here is that a woman is going to Afghanistan, one of the least friendly-to-women countries on the planet. The film pokes fun at many of the various cultural norms of the country, although it’s not going to get particularly venomous or political here. This is Kim Baker’s story and, for the most part, it just follows her and her various interactions and learnings within a repressed society – even though a good chunk of the film takes place in the “Fun House,” an area in which journalists from around the world hang out and party.

This is a film about one woman finding herself in a country with some of the most repressed attitudes toward women in the entire world. That’s a good enough premise for a film, and Tina Fey is more than up to the task.

Whiskey Tango Foxtrot is reminiscent of a couple of films from last year starring funny, talented people going to a war-torn country in hopes of finding themselves. Our Brand is Crisis and Rock the Kasbah both went more-or-less unseen, but this is a film that feels like it’s trying to reap whatever success they had – an idea probably looked on more favorably before the box office totals were revealed for the two earlier projects. They’re all not outright comedies, and they’re ultimately trying to hit similar notes – without actually saying anything insightful about the situations of the countries their characters are visiting – and they’re all kind of middling efforts. They’re not bad, and they’re not particularly good; they occupy a “meh” middle ground, and it’s absolutely understandable that – at least in the case of the first two – there isn’t much interest from the general public.

The main thing that Whiskey Tango Foxtrot has going for it is Tina Fey, who turns in what’s likely the best dramatic performance of her career, here playing a real woman, Kim Barker, whose memoir has been adapted to the screen. (The character in the film has had first “r” dropped from her last name.) She’s funny at times, but there’s real dramatic depth to the performance, and you can feel the character growth she goes through as the film progresses. It’s a sharp, believable, and sympathetic role for Fey, and reminds us that comedic actors are often just as strong at drama, even if the times they do it might be rare.

The supporting roles make less of an impact, mostly because they feel fleeting. Margot Robbie, Billy Bob Thornton, and Alfred Molina all go long stretches without appearing on-screen. Robbie is mostly here as a party friend, Thornton is a hardened military man, and Molina is a slightly creepy official. They’re not bad performances, but they’re underdeveloped – albeit interesting – characters. Martin Freeman becomes much more prominent in the film’s second hour, and he’s charming but not much more. Christopher Abbott probably gets the second most developed character, although he, too, disappears for a long stretch of time midway through. This is a film that almost feels too singularly focused on its protagonist.

Whiskey Tango Foxtrot is a confusing and disappointing watch if you go in expecting a laugh-out-loud comedy. The marketing may have portrayed it that way, but almost all of the jokes – not just the best ones – are in the trailers. This is a film about one woman finding herself in a country with some of the most repressed attitudes toward women in the entire world. That’s a good enough premise for a film, and Tina Fey is more than up to the task. But poor expectations can color an experience, so don’t go in expecting something else. It’s got some observational humor and pokes a bit of fun at the situation, but it’s more of a drama than a comedy. It’s moderately successful, but that’s about it.

Bottom Line: Whiskey Tango Foxtrot is a mismarketed film that’s perfectly serviceable but otherwise doesn’t do a whole lot more than act as a passable and slightly funny distraction.

Recommendation: If you saw and liked Rock the Kasbah and Our Brand is Crisis, this will be right up your ally.