So, here’s the rundown with Hellpoint: Souls are now called Axions, Estus Flasks are healing injections, and bonfires are called breaches. Start practicing your dodge roll because we’ve got another Soulslike on the way. This one’s set on a crumbling space station though, which is actually uncharted territory for the genre despite the fact that games have been cribbing off Dark Souls for going on a decade now.

That may sound dismissive, but Hellpoint from Cradle Games manages to put together a unique environment for a Soulslike: the Irid Novo, a massive space colony that’s orbiting a black hole. If you somehow manage to make it past the title screen without realizing that something’s horribly wrong with the place, then the intro cinematic will help nudge you in the right direction when a menacing narrator celebrates their ability to end all suffering while showing off alarmingly facist iconography and a hallway full of dead bodies.

As you might have guessed, the game leans heavily towards the horror side of sci-fi, with an atmosphere more reminiscent of Dead Space or the 1997 film Event Horizon, with a focus on body horror, occult forces, and a sort of twisted religious fanaticism.

You play as a humanoid creature known as a “spawn,” newly manufactured out of some sort of goo and ordered by an ominous voice to head to the observatory. The game has the celebrated “figure out the lore through exploring” shtick, and in a fun twist, it actually makes figuring out that lore your main goal. After reaching the observatory, you’re tasked with getting as much information as possible about what went wrong and reporting back to the disembodied voice so that the “experiment doesn’t go to waste.”

Of course, Hellpoint players will no doubt start questioning who in their right mind would want to salvage whatever experiment went on here, since its aftermath has left the space station with an excess of hostile monstrosities made of twisted flesh, extradimensional horrors that defy natural law, and the classic Soulslike staple: big angry dudes in armor.

But fear not, since you’re given immediate access to one of the most storied weapons of science fiction — a big stinking wrench.

Okay, maybe a wrench is an odd weapon for a naked 3D-printed human knockoff to swing around as he makes his way through a hyper-advanced space colony, but most of the early enemies just try to claw at you with their hands or whack you with a big spiky stick, so you’re on pretty even footing. There is an occasional guy holding a big flashy gun, so the sci-fi setting isn’t ignored in the combat, but hand-to-hand combat still makes up the bread and butter of the battles. 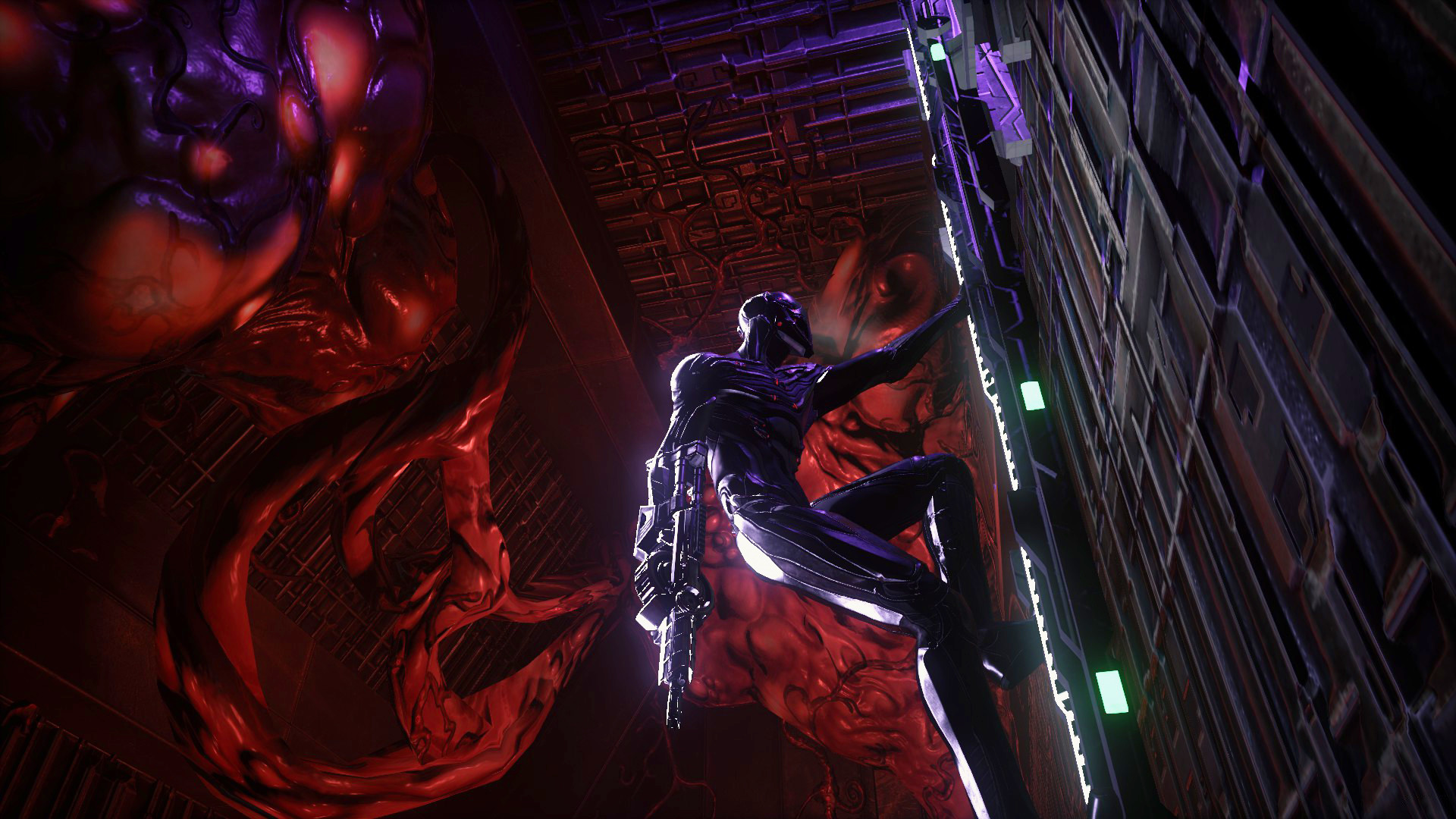 There’s actually something a bit off about the regular enemies, though — they’re pretty easy to just run up to and clobber to death without using the kind of measured, cautious approach that Soulslike games are known for — and it’s not uncommon to be able to make a bloody, screaming mess of one foe while another stands just a few feet away, blissfully unaware that anything’s going on.

That experience got me overconfident though, and I ended up getting completely curb-stomped the first time I went toe to toe with one of the aforementioned big dudes in armor. After working out how to read and dodge their attacks, I was able to take them down, so it’s clear that Cradle Games is perfectly capable of designing the kind of mindful combat that Soulslikes are known for when it wants to.

Eventually you do run across more futuristic weaponry, such as a rail gun. But if you’re like me and your definition of “get gud” means “grind until you can one-shot foes with a wrench to the face,” you may find yourself heavily invested in melee attacks before the option to start shooting enemies even becomes available.

Despite my occasional quibble, Hellpoint‘s combat is responsive and satisfying, and the world succeeds at beckoning the player to explore its secrets. It’s nothing revolutionary, but it succeeds at what it sets out to do.

The developers have made a point of highlighting their previous experience on AAA games such as Spider-Man, Assassin’s Creed, and Call of Duty, and this experience has clearly shown them how to give the game a solid core. They’ve even added some neat additions to the genre, such as the addition of split-screen co-op and changing enemies’ placement and behavior based on the space station’s position relative to the black hole it orbits.

However, the AAA comparisons don’t extend to the graphics. Some character models look like they’re from the Xbox 360 era, and there are plenty of examples of architecture that looks unusually low-poly. Even so, they’ve managed to create some awe-inspiring vistas. Every glimpse you get of the black hole, for instance, is worth pausing to take in.

Hellpoint is coming out in April 2020 — more than two years after its Kickstarter said it would come out, but heavily delayed Kickstarter games are pretty much the norm these days. More unusual are ones that, at least at first glance, seem to be as this well put together.