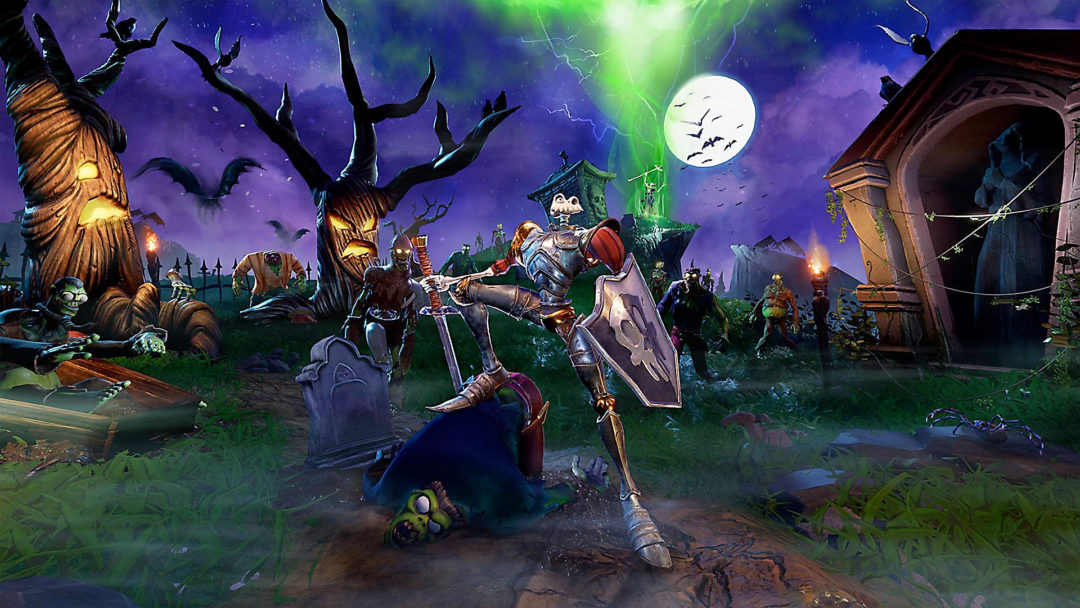 MediEvil reviewed on PS4. Review copy provided by the publisher.

MediEvil‘s undead protagonist, Sir Daniel Fortesque, was a scoundrel and coward in life. When the evil wizard Zarok’s magic accidentally brings him back after a long slumber, he takes his resurrection as a chance to belatedly earn his ill-gotten status as a legend. MediEvil itself needs no such redemption — its legendary status is beyond reproach. The MediEvil remake is not a chance to live up to hazily remembered cultural exaggerations, but a well-deserved and long-delayed victory lap for a beloved cult classic.

Other Ocean‘s 2019 MediEvil is a highly faithful remake of Sony’s 1998 original. Practically everything has been retained, even the bugs, the period-typical quirks that have since become unfashionable, and the workarounds used to squeeze the game onto the PlayStation’s primitive hardware. Many of these read as pleasantly retro gimmicks in 2019, but others could be deal breakers for modern players, especially those unfamiliar with the original title.

Screen transitions separate smaller areas that could have easily been one large zone. The camera, although greatly improved, is fussy, unresponsive, and prone to pointing at walls and floors. The “Daring Dash” ability has only about a 75 percent chance of actually activating when needed. And it feels wrong in 2019 to have no on-demand healing ability, despite Sir Dan carting around an entire chemistry set’s worth of restorative goo in vials and flasks. Calling the remake a “warts and all” affair would over-emphasize the severity of these issues, but it’s certainly “weird, distracting birthmarks and all” at the very least.

In addition to jank inherited from years past, 2019’s MediEvil brings a bit of new jank of its own. The game’s basic weapon, the short sword, was once a powerful and satisfying tool, but it’s grown a bit pitiful over the last two decades. The 1998 short sword could knock enemies around the environment, giving it some crowd control functionality. It also punctuated every blow with a cartoonish WHAP!, like the sound of a stiff being hit with a custard cream pie.

The remade Sir Dan doesn’t swing his short sword so much as swish it like a feather duster, and his opponents barely respond to its impacts. Without the ability to strategically sweep enemies around the battlefield, taking damage in early scraps becomes unavoidable, leaving the combat feeling loose and not tactical. The more powerful broadsword and magic sword better emulate that sharpened-surfboard-on-a-stick feel of Sir Dan’s old arsenal, but they take several hours and a bit of elbow grease to unlock.

Combat is on the slippery side, but Sir Dan’s quest requires him to do more than chop down zombies. MediEvil comes from an era when 3D environments had to be incredibly dense to make up for their small footprints. They were designed to be explored carefully and thoroughly. Keys found on one end of a level are often separated from their corresponding doors on the other by an obstacle course of traps and puzzles that needs to be navigated several times. The remake’s level designs are unchanged — and hardly need changing. The game’s pacing and variety are still superb, with riddle-packed labyrinths sitting back to back with unrelenting combat gauntlets.

Where the remake really soars relative to the original is in its presentation. MediEvil crammed as many aesthetic pleasures onto a PlayStation disc as would fit. The character designs were inventive, the environments were varied and charming, the music was bouncy and eerie, and the vocal performances were some of the best the console had to offer. But all that visual and aural bombast had to fit on a CD-ROM, and many were mutated in the transition from concept to finished asset.

The 2019 MediEvil feels like MediEvil as it was always meant to be seen and heard. The original game’s barely legible papercraft marionettes have been upgraded to expressive claymation-like figures. The new models gesticulate and mug for the camera with all the character their vaudevillian voices always suggested. Other Ocean made the inspired decision to build the new animations around the original audio files, preserving inimitable performances like that of Harry Dickman as Gallowmere’s gargoyle peanut gallery. The result is a treat for returning fans, but the animations and performances are both so strong that no nostalgic reaction is necessary to appreciate them.

Sir Dan himself is especially improved by the new visual fidelity. The skeletal knight has heaps of personality written into his backstory, but his inexpressive original model and tiny selection of vocal barks could never reveal it. The new Dan, ironically, is full of life. With just one eye and a single row of teeth, he visibly expresses the haughtiness, indignity, and stubborn pluck that makes him such an endearing blockhead of a hero.

The world of Gallowmere has benefited from a visual upgrade too. The new MediEvil gives each of the game’s numerous environments an expanded palette, lavishing levels with moonlight cyans, haunted house purples, and slime greens. The result subtly transforms the feel of the game. What was once a vaguely grimy odyssey, undertaken in the pitch black of a PS1 night, now feels more like an adventure through a series of classroom Halloween decorations. The original MediEvil wasn’t exactly oppressive in tone, but the remake still manages to feel appreciably lighter.

That lightness of tone, the difficulty that tests caution and creativity rather than technical skill, the game’s breezy 8-hour length — all these elements combine to create a title that is, above all, comfortable. MediEvil is almost perfectly calibrated to be a Halloween tradition, something to be curled up with every year when the temperature begins to drop. It’s the video game equivalent of The Nightmare Before Christmas or It’s the Great Pumpkin, Charlie Brown.

For both good and ill, MediEvil is bringing many ’90s conventions back from the dead. Some of these were retired for a reason, like the game’s unforgiving no-checkpoints approach to difficulty. Others are returning in triumph, like the wry Douglas Adams-esque dialogue and surreal sight gags that were typical of titles like The Secret of Monkey Island and The Neverhood. What really stands out as a retro throwback in 2019, though, is the game’s purity.

MediEvil has no online multiplayer component. It promises no DLC. There is no crafting system, no base building, and Sir Dan cannot spend points to earn new abilities from one of three skill trees. When the story is over, it is actually over. Although the original title got a sequel in 2000, the story doesn’t end on anything as gauche as a sequel hook. Sir Dan is not booted back out to the world map after defeating Zarok to clean up neglected side quests — there practically are no side quests. Every step and every swing of the sword brings Sir Daniel Fortesque measurably closer to saving the day, with no distractions or time sinks along the way to pad the journey out to 40, 80, or 100 hours.

In MediEvil you play as a skeleton with a sword, and there is an army of monsters standing between you and an evil wizard. What more could you possibly ask for out of a video game?