Developed and published by Blizzard Entertainment. Released on May 24, 2016. Available on PC (reviewed), PS4, Xbox One. Review code provided by publisher.

Do you remember when Team Fortress 2 came out of no-where back in 2007? The game, which pretty much everyone had written off as vaporware, was initially conceived as another generic, gritty Call of Duty-esque military shooter, but at the end of its decade-long development cycle, it surprised everyone with its colorful and cartoony take on the class-based shooter genre. Why am I talking about Team Fortress 2 in my Overwatch review? Because the two games draw a lot of parallels – not just in visual style and general gameplay – but in the way that Overwatch, Blizzard’s first new IP in seventeen years has come out of no-where, and has once again shaken up the class-based shooter genre. 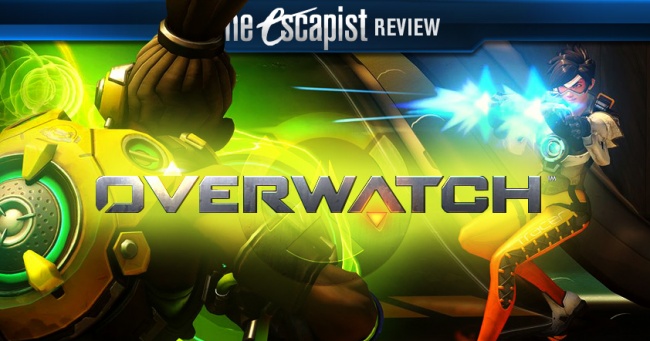 Team Fortress 2‘s biggest “problem,” as many die hard fans will tell you, is that it muddied the waters by adding dozens of new weapons, items, and of course, hats. Some of these items drastically changed up the way a class played and looked, and some of them were just straight-up upgrades from their vanilla counterparts. There was no longer any way to tell which class could do what at a glance, and the large map sizes (built to accommodate 24 players) certainly didn’t help. It became, for lack of a better word, a clusterfuck.

Overwatch solves that problem by borrowing a few tricks from everyone’s favorite burgeoning genre: the MOBA. Rather than having the traditional 12v12 player count of the shooters of old, it cut things down to a more competitive 6v6, and rather than having few classes with many weapon choices, each of Overwatch‘s 21 heroes are tied into a specific “kit” of weapons. What this means is that players can quickly learn what every hero can do: something that the game helps with by offering hints on how to identify and counter a hero whenever you are killed by it. I learned to keep my distance from Roadhog, to find alternate routes around Bastion, and to duck for cover when I heard McCree say “It’s high noon”, just by playing the game.

The real magic trick that Overwatch pulls is making each hero feel balanced and useful.

But the real magic trick that Overwatch pulls is making each hero feel balanced and useful, each with its own strengths and weaknesses. You can switch heroes whenever you die, so if you get sick of being constantly sniped by that annoying Widowmaker, you can switch to a hero she is weak to (hint: Winston) and counter her. It’s like a very fast game of rock-paper-scissors, especially when it comes to team composition: simply put, if you don’t have a “balanced” team of damage dealers, tanks, defenders and supports, you will probably lose.

Each hero has one or two weapons, some special abilities, and an “ultimate” ability. The ultimates are another tool borrowed from the MOBA, and can really make an impact on the game. Objective-based shooters often end up in endless tug-of-war stalemates, so smart use of your ultimate can quickly turn the tide for your team. Pharah’s ultimate, for example, can devastate a team “turtling” on a control point, while Torbjorn’s can help you pull off a last-ditch defense effort. Some are low-impact on a short cooldown, such as Widowmaker (who can reveal the locations of the enemy team), while others are on high cooldowns with a game-changing impact, such as Mercy (who can resurrect all recently slain teammates).

The game has 12 maps at launch which feature several different game modes spread among them. All of these should be familiar to FPS veterans: “Escort” is the game’s version of Payload, where attackers escort a moving payload to a point on the map, “Assault” is your standard attack/defend control point mode, and “Control” is essentially King of The Hill. Maps are tied to a specific game mode: Hanamura, for example, can only be played as Assault.

Every map has its own unique theme, and takes place somewhere within the Overwatch universe. They are all fantastically designed and made specifically to accommodate all of the game’s different heroes. They have cool stuff like ledges that only characters with an upward mobility boost (Pharah, D.Va) can access, ambush locations for characters like Roadhog and Bastion, health packs tucked away in little alcoves, and plenty of alternate routes through the map. Each map is so full of character that if you slow down to pay attention, you will pick up a lot of subtle details. It’s a bit of compensation for the game’s lack of a traditional “story mode”. 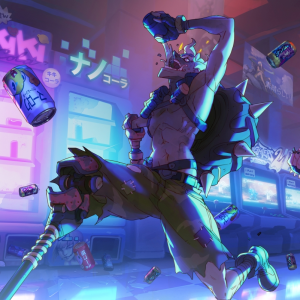 There is a progression system behind it all, awarding you with loot boxes every level. They are somewhat similar to Battlefield‘s Battlepacks, in that they contain random cosmetic goodies like skins, sprays, and voice lines. It’s not really anything of much value but collectors will get a blast out of it. This is the first game I’ve played in a while where the progression system is simply a fun bonus, rather than something that “locks you out” of certain parts of the game until you reach an arbitrary level.

The dreaded “microtansactions” take the form of additional loot boxes, which can be purchased for real money, but I honestly never felt compelled to purchase any. As far as microtransactions go, it is pretty tame, and Blizzard has confirmed that any post-launch maps and heroes will be released completely free of charge to all owners of the game, so there’s no need to worry about microtransaction heroes in the future.

So far, so good, but there are a few things about Overwatch that worry me in terms of its long-term health. I cover them a bit more in detail here, but the TL;DR is that the balance is still a bit out of whack in places. Drastic changes in the beta, like Zennyatta and Symmetra going from hero to zero, as well as Blizzard’s history of over-nerfing stuff, makes me wonder how balance patches for the game will play out. There’s also some other little stuff, like unlimited ammo, slow base movement speed, and being able to pick multiples of the same hero, that may cause problems down the line.

Additionally, the lack of a real singleplayer campaign will definetly be a turn-off to some: epsecially when you consider those amazing animated shorts that were released in the lead-up to its release. It’s a huge missed opportunity to flesh out the story of the world, as well as pad the game with some additional content. That said, I don’t think the game suffers because of it, as the multiplayer is solid and meaty enough to justify the price of admission.

These are all little nitpicks and personal preferences, more than anything. It’s very clear that Blizzard has put in a herculean effort into polishing Overwatch, making sure that it feels great to play, has basically no bugs or glitches, and has a solid amount of content.