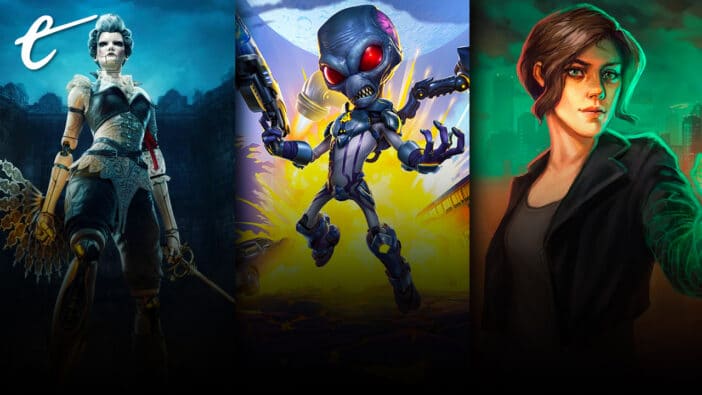 There are so many great upcoming games and recently released game demos this year that we’re working overtime to preview as many of them as possible, whether written or in our streams. So today, we are offering a quick preview of Soulslike Steelrising, upgraded remake Destroy All Humans 2 – Reprobed, and point-and-click adventure Old Skies, the latter two of which have Steam Next Fest demos available now.

Steelrising is an action RPG from Spiders, the team that brought you GreedFall, set during the French Revolution but in an alternate timeline. In this world, the uprising is tied to the heavy use of fully autonomous robots called automats that have been armed for combat and sent in to quell the dissidents under the command of King Louis XVI.

You take control of Aegis, a unique automat that has the ability to speak and make her own decisions. Tasked by the king to keep guard over the queen, Marie Antoinette, Aegis is secretly sent by her highness to investigate the disappearance of her children and report back.

The preview build introduces all of this exposition in an opening cutscene between Antoinette and a friend as they lament their predicament and place blame solely on the now mad King Louis XVI. Aegis, acting as the queen’s eyes and ears, must now break through the ranks of her own kind to learn the truth. The setting is intriguing, but based on what I was able to play, the ties to the real-world historical figures in the story feel disconnected from the moment-to-moment gameplay.

The automats look quite foreign in the old French environments; their intricate clockwork designs and gilded ornamentation stand in stark contrast to their murderous intentions, as well as the realistic gardens and countryside on display in the levels I was able to see. It’s possible that juxtaposition is intended, but I can’t shake the feeling that a country with such fantastical technology would implement more elements of it within its society.

The automats themselves are an impressive collection of menacing foes that range from mechanical dogs to eight-foot-tall spear-and-cannon-wielding bipeds. The animations do a great job conveying the cold and systematic threat of a machine with orders to kill, but their designs leave me with the question: “What were these automats originally used for?” The former roles of enemy automats aren’t easily recognizable, so I’m hoping lore exists that will explain the place these machines once held in the now crumbling society. Aegis for example is described as being a former dancer who would entertain the royal court, and now that she’s been outfitted with weapons, the elegance of her dancing abilities adds deadly prowess to her combat. 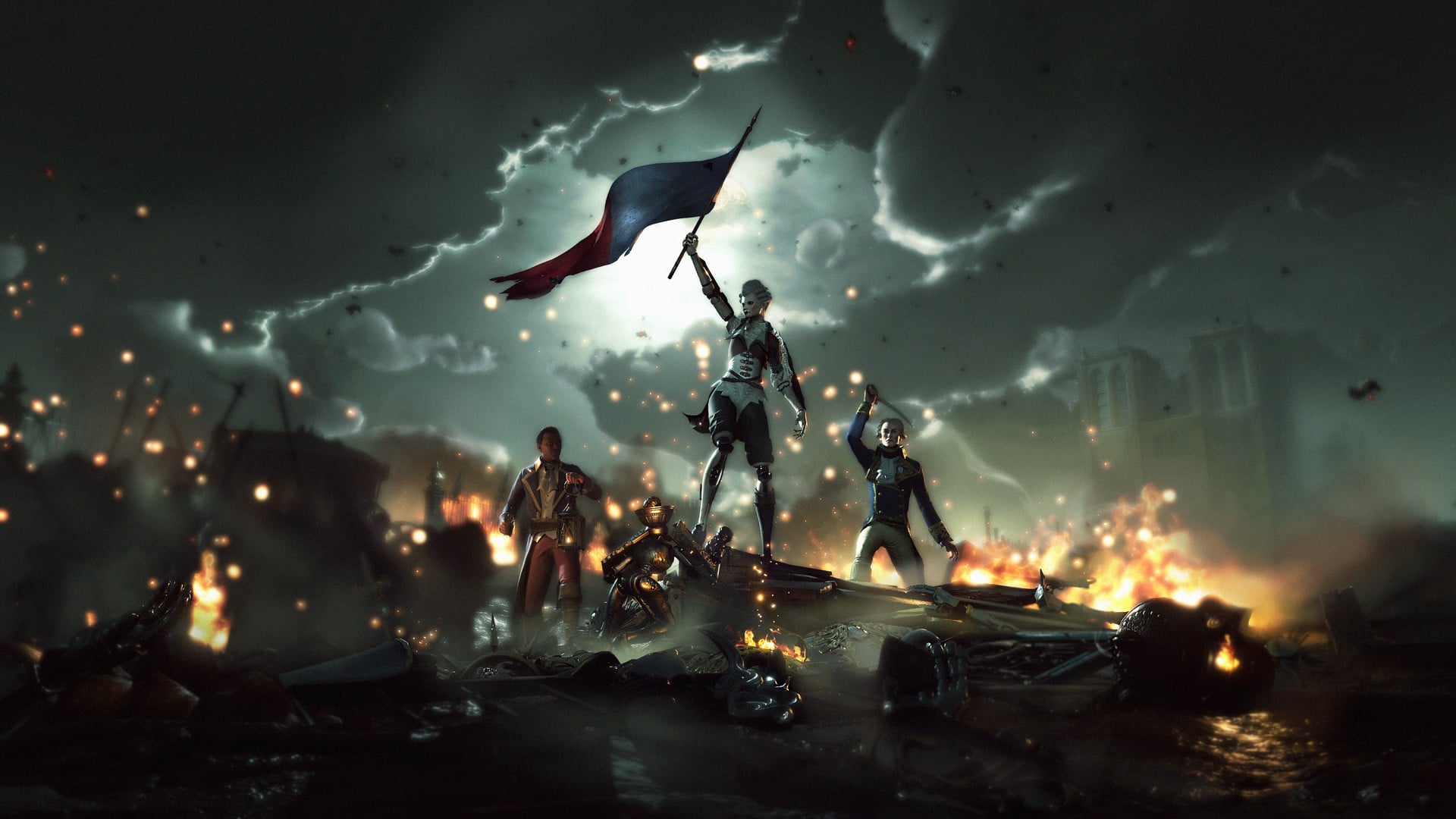 Aegis is quick and agile but has a variety of attacks that feel weighty no matter what class of weapon you make use of. The preview allowed the selection of fans, tonfas, a large hammer, or a chain whip, but there are eight classes of weapon and 40 weapons in total for you to seek out and experiment with. Aside from varying speeds and combos, each weapon also has a unique special skill granting you the ability to shield, parry, or even ignite the immediate area with fire. You can apply status effects, such as to burn or freeze enemies, to better control mobs in battle and collect their anima essence upon defeat to upgrade yourself at vestal savepoints. In keeping with other Soulslikes, your collected anima will drop upon your death and you’ll need to retrieve it or lose hard-earned XP for upgrades. Though, unlike in the Souls series, there are a range of difficulty options, including one that can remove that penalty if you’d like.

Steelrising is also much more linear than most other Soulslikes, at least in the few stages I was able to preview. It’s level-based, which should make the experience more digestible for interested newcomers.

I left the Steelrising preview very much intrigued by the alternate history setting but didn’t feel immersed enough in those events. It has the makings of a fun single-player campaign, and with the promise of later upgrades to your mobility like a dash and grappling hook, there’s a chance the final game won’t feel as heavily directed as the early levels. If it can match even some of the historical playground antics of the Assassin’s Creed games, it’ll be doing a lot more to set itself apart from other games of its kind. It already holds the distinction of being the only thing to make a character wearing a powdered wig look like a badass.

Preview: Destroy All Humans 2 – Reprobed Is Exactly What You Expect, for Better and Worse

Crypto is back with a bigger arsenal, and he’s ready to probe in Destroy All Humans 2 – Reprobed, the aptly named remake of the 2006 title. I played through the first two chapters of the upcoming game, and it’s almost exactly what you’d expect.

The gameplay is just silly, over-the-top fun. Causing chaos by making cars bounce around and, of course, probing bum-bums are all enjoyable combat mechanics. I particularly enjoyed the UFO sequences because there is something so satisfying about burning down iconic buildings with a giant laser beam and turning gravity upside down. The updated visuals give the game that glossy, modern feel, and the revised UI makes for an experience much easier to follow compared to that of its 2006 counterpart.

But all the new refinements aside, the writing is identical to that of the original. As such, its attempt at edginess makes it feel uncomfortably cringy, which turned me off quite a lot. I also came across a few comical bugs during my play sessions such as NPCs having unusually large heads, so hopefully these will get resolved by launch.

Overall, Destroy All Humans 2 – Reprobed is shaping up to be a very faithful remake of the original. If you enjoyed that, this seems like it will be the nostalgia trip you are looking for when it releases on August 30 for PC, PlayStation 5, and Xbox Series X | S.

Old Skies is a point-and-click adventure game developed by Wadjet Eye Games. You play as Fia Quinn, a professional time traveler escorting rich people through the past while making sure they don’t change the timeline too much.

The game will have seven clients; the Steam Next Fest demo covers one of them. The mystery plays out with a sci-fi twist and solid payoff. The complexities of time travel, such as remembering something that’s no longer present due to changing the past, are hinted at, adding built-in uncertainty and the possibility of unique ideas for the mystery elements.

It sticks close to its adventure game roots, requiring things like finding a rag and dipping it in something wet on two different screens to solve a puzzle. Thankfully, the puzzles were sensible and enjoyable, requiring the player to pay attention while using a manageable number of interactive objects and locations rather than moon logic.

Characters have a smooth, rotoscope-style animation. This makes them look great in motion and fine when still, but there’s currently no transition animation between the two, which looks a bit jarring. The voice acting ranges from passable to good. However, the pacing of dialog can be an issue. Sometimes, characters almost talked over each other, with no pause for emotion or breath. This cut the tension in scenes that should have hit harder given the weight of the subject being discussed.

After finishing Old Skies’ demo in about an hour, I’m excited for the full game. With six other clients in the final game, I’m looking forward to what time travel shenanigans and sci-fi nonsense the game pulls to make a compelling and emotional sci-fi experience. Old Skies is “coming soon.”