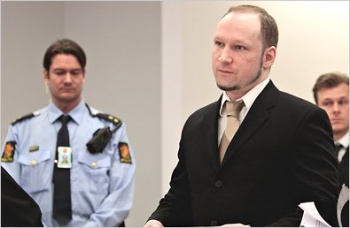 The psychiatrists involved in the Breivik trial did not imply gamers older than 20 are abnormal, no matter what Reddit might tell you.

It’s a good story. The sensational trial of mass-murdering berk, Anders Behring Breivik, has fueled a glut of anti-videogame moral panics, largely due to Breivik’s claims that he used Call of Duty to “rehearse” for the 2011 Norway terrorist attacks that left 77 dead. Now it turns out that the expert psychiatric witnesses called to testify on Breivik’s mental state, are a bunch of game-hating moral crusaders, as the following quote seems to prove.

“I would still like to point out that sitting alone in your room and playing games, no matter what the scope of the matter, call it addiction or whatnot, is not normal for a man in his 20’s,” reads a translation of the original story.

Juicy. Exactly the kind of “what are they thinking?” anti-videogame nonsense that racks up hundreds of angry comments and keeps clicky-clicky-ten-dollar journalists in wine and Hobnobs. The only problem? It’s bollocks. The psychiatrists said nothing of the sort.

The quote actually comes from an agenda-pushing Reddit user whose sloppy translation work was picked up by several gaming websites (I’m not going to name names, I myself was a few hundred words into a writeup before I realized something was askew). According to secondary sources, the translation is either hilariously cack-handed or deliberately misleading.

The psychiatrists were not implying that gaming itself was abnormal for those over twenty, kind of the opposite in fact. They make it clear that one can be completely normal and play games, but argued that the fact Breivik was capable of playing a socially involved game doesn’t prove he’s not a complete nutcase. They did admit that gaming for more than 14 hours a day could constitute an addiction. That’s not an unreasonable statement.

Surely we have enough real anti-videogame arguments to worry about without inventing our own?