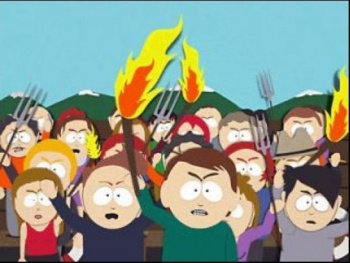 “Review bombing,” for the uninitiated, is the act of posting very low score user reviews on sites like Metacritic or Amazon in order to bring down the review average. It’s an oft used tactic in the ongoing war between the console fanbases, with platform exclusives, particularly in the more competitive genres, getting hundreds of negative reviews from grumpy fans or iconoclasts who deem a title “overrated.” While this causes bigger publishers to simply tut, roll their eyes and light up another cigar with a flaming fifty, it can be a devastating blow to a smaller developers. Both Supergiant Games and Signal Studios saw the Metacritic scores of their latest games, Bastion and Toy Soldiers: Cold War respectively, drop sharply overnight, without a clear reason why.

Metacritic seemed content to let the reviews, many of which were straight zeroes with no written content whatsoever, stand, at least prior to an editorial on Giant Bomb. Metacritic has since pulled some of the negative reviews, and banned the users responsible, returning Bastion and Toy Solidiers: Cold War’s Metacritic scores to something more in line with the opinions of sane people.

“A publisher of a different game let us know that he noticed that his game had been ‘bombed’ by a bunch of zero ratings in an unusually short period of time,” said Metacritic co-founder Marc Doyle. “While investigating those ratings, we noticed a group of user accounts and activities that were clearly illegitimate and violated our terms of use.”

It isn’t clear if Metacritic is going to review their review system to prevent other titles from being bombed in the future, but Signal Studios president Douglas Robert Albright III thinks it wouldn’t take much to make the system bomb proof.

“The way to fix Metacritic user reviews is to simply require a written review and verify user accounts,” he said. “If it was just some random blog I’d say whatever. But this is a major news review aggregator that should have better oversight and some standards.”