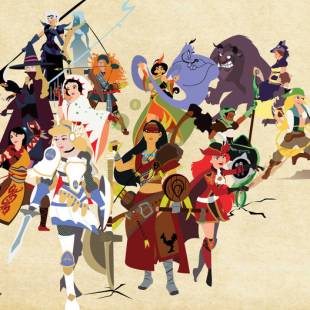 DeviantArt user Geyres has created a gallery of Disney Princesses redesigned to match their ideal job from Final Fantasy.

There are challenges that come along with becoming a parent, some of them more obvious than others. You expect to lose sleep, for instance. You also expect to change diapers, have your house be a perpetual mess and to never have money again. All of this said, probably the trickiest thing you'll encounter as the father of a young daughter are the Disney Princesses.

It should be said that I'm not opposed to Disney or even movies involving princesses. That being the case, with only a few exceptions, the Disney Princesses are pretty lame. Sure you have your warrior maidens like Mulan and Merida, but vastly tilting the scale in the other direction are the likes of weak, subordinate damsels like Snow White, Cinderella and (ugh) Ariel. Where are the princesses who like to run around pretending they're dinosaurs or who made their Daddy proud by (voluntarily) picking their own first lightsaber at the toy store? Why does it always have to be pretty faces, big dresses and true love?

That said, I can't help but applaud the work of artists like Geryes, a member of DeviantArt, who recently posted a gallery of Disney Princesses customized to be a bit tougher, Final Fantasy style. Geryes adapted each of Disney's leading animated ladies into a new version based on what he thought their Final Fantasy job class would be. There are some obvious ones -Merida as an archer- but others were a bit more creative. I was an especial fan of Belle as a Beastmaster.

Geryes work, of course, is not affiliated with Disney or Square Enix on any formal level. That said, I kind of wish it was, because Paladin Cinderella is leagues cooler than the original scrubbing-the-floors Cinderella. But I digress, take a look at Geryes work and let us know which Disney Princess made the easiest transition from boring to battle ready.