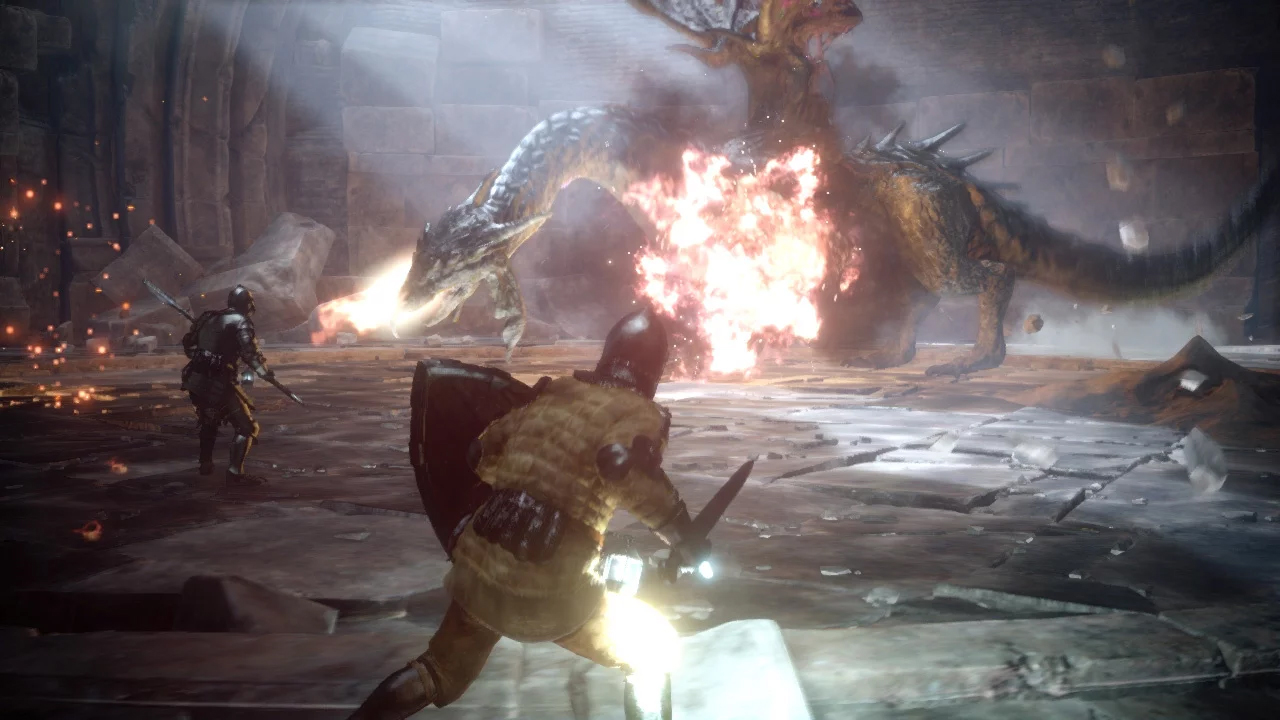 While the list of games we’re stoked to play in 2020 continues to grow by the week, there are a handful of anticipated projects that sit there collecting dust with a giant question mark next to them. These are some of the games that have been announced over the past decade, but at some point or another, they went completely off the grid.

However, I won’t be including games that were announced at or after E3 2019. Going silent for a year or so after reveal is pretty standard in the games industry, so stuff like From Software’s Elden Ring, Tango Gameworks’ GhostWire: Tokyo, and the sequel to The Legend of Zelda: Breath of the Wild are all exempt. I’m also not going to focus on games that we pretty much know exist but haven’t been officially announced yet. So no Grand Theft Auto VI, Assassin’s Creed Ragnarok, or whatever the hell is happening with Batman over at WB Montreal.

After its brief reveal at E3 2017, Metroid Prime 4 went pretty much radio silent for a year and a half. With Nintendo only showing off the game’s logo and nothing more, it was pretty obvious that the project was very early in development. Cut to January 2019, and Metroid Prime 4 came back out of hibernation, albeit in a different form.

In January 2019, Nintendo announced that, due to quality concerns, the project had been completely restarted. Furthermore, development shifted over to a team at Retro Studios, the group behind the original Metroid Prime. With this in mind, it was no surprise that Nintendo held the game back from its E3 2019 lineup. Chances are we’ll hear from the project again during a Nintendo Direct at some point in 2020.

BioWare showed off a brief teaser for the fourth installment in the Dragon Age series at the 2018 Game Awards, but it was less of a reveal and more of a notice that the studio hasn’t forgotten its beloved fantasy franchise. While the minute-long teaser was certainly short, it provided enough details for hardcore fans to begin speculating over. However, an EA earnings call from last fall pointed towards the game still being quite a ways away.

With the lukewarm reception to recent BioWare games like Mass Effect Andromeda and Anthem, it stands to reason that a lot of pressure is being put on The Dread Wolf Raises to live up to the quality and potential of the series. There’s a good chance the next Dragon Age will make another appearance at EA Play in June, which generally runs just prior to E3.

Rayman and Beyond Good & Evil creator Michel Ancel wowed us when he revealed Wild, a PS4 exclusive, back in August 2014. The magical nature-based open-world adventure was to be the first game from Wild Sheep Studios, a new side venture he started up while still working at Ubisoft. We got another chance to see the game in October 2015 as part of Sony’s Paris Games Week lineup, and it impressed us even more. But then Wild straight-up vanished.

It’s been over four years since we saw Wild, and in that span, Michel Ancel’s time has been spent showcasing the reemergence of Ubisoft’s Beyond Good & Evil 2, most recently last year just prior to E3. It’s possible that Wild still exists, and given its nature as a PlayStation exclusive, perhaps we’ll see the ambitious game emerge once again with the reveal of the PlayStation 5.

The Elder Scrolls VI and Starfield

Of all the games on this list, these are the two with the most obvious situation. Bethesda’s reveal of both the sixth core Elder Scrolls game as well as its new space-faring franchise Starfield at the company’s E3 2018 press conference were pretty much a means of quelling any anger fans might have over the simultaneous reveal of Fallout 76. We didn’t expect to hear much from either game for a while after that, and lo and behold, a year and a half later, we still haven’t.

It’s pretty clear that both games were extremely early in development at the time of reveal. And given the rocky reception of Fallout 76, Bethesda is going to take as much time as it needs in order to ensure that both games land with the same critical and commercial success as Skyrim did back in 2011. Maybe we’ll see one of them further teased at a Sony or Microsoft pre-E3 console reveal, but my money’s on seeing them next at Bethesda’s E3 2020 conference in June.

Capcom’s white whale holds down the distinction of being one of the very first games ever shown off for the PlayStation 4. The dark fantasy action RPG with some hints of science fiction elements was first shown at the PS4 reveal event in February 2013. But as you can probably guess, things went downhill from there. The game eventually went the way of vaporware, with only the occasionally trademark filing to remind us that it ever even existed in the first place. Capcom briefly mentioned Deep Down in a Eurogamer interview in November 2019, but the news wasn’t exactly promising.

The thing that makes Deep Down interesting to me on a personal level is that it’s the only game on this list that I had a chance to actually play. The short demo of Deep Down I played at Tokyo Game Show 2013 presented a gorgeously rendered dark fantasy setting with slow, methodical combat reminiscent of Dark Souls, so it was pretty clear what Capcom was going for. Perhaps the game revealed alongside the PlayStation 4 itself back in 2013 will reemerge anew alongside the PlayStation 5 later this year, but I wouldn’t hold my breath.

Witchfire is the second game from the Polish studio The Astronauts, who previously released 2014’s dark detective adventure The Vanishing of Ethan Carter. The team is made up of a lot of the folks from People Can Fly who worked on Gears of War: Judgment and Bulletstorm, and Witchfire’s trailer looked to deliver action in a similar manner as those two.

Sadly, since the game’s reveal at the 2017 Game Awards, we haven’t heard a peep from Witchfire. Like a lot of games on this list, it’s very likely that at some point in development, the project evolved and became a next-gen game. Chances are we’ll see Witchfire reemerge on the Xbox Series X or PlayStation 5.

The name above might not ring a bell, but Project Re Fantasy is the debut game from Studio Zero, a new internal studio at Atlas made up of the core Persona team. The game is being produced and directed by Katsura Hashino, with art by Shigenori Soejima and music by Shoji Meguro, all three of which were leads on Persona 3, 4, and 5 and Catherine. Unlike the previous projects, Re Fantasy is said to stay true to its name and take place in a fantasy setting.

Both the studio as well as the game were announced by Atlas at the end of 2016 after Persona 5 had already been released in Japan. In the meantime, we saw the western release of Persona 5, other projects like Catherine: Full Body and Persona 3 and 5: Dancing, as well as the upcoming Persona 5 Royal and Persona 5 Scramble, all of which were worked on by teams other than Studio Zero. Given the long development life of the previous core Persona games, it’s not surprising that we haven’t heard about Project Re Fantasy much in the past few years. But if the new game is at the same level of quality as the past ones, they can take all the time in the world.

Back at the 2010 San Diego Comic-Con, Capcom held a panel in which it announced a pair of Street Fighter and Tekken crossover fighting games, each respectively using the core mechanics from one of the games. While Street Fighter X Tekken was eventually released in 2012 on the PlayStation 3 and Xbox 360, we’re still waiting on the more Tekken-centric Tekken X Street Fighter.

In 2016, Tekken series lead Katsuhiro Harada announced that the game was on hold. In an interview with VGC last year, Harada said that the game is becoming “harder to justify” with the individual successes of Tekken 7 and Street Fighter V. With nearly two full console generations since the announcement of the game, there’s a solid chance that Tekken X Street Fighter is never going to happen.

Dead Island 2 has had quite the tumultuous development. Originally revealed with a CG trailer at E3 2014 and set for a 2015 release date, Dead Island 2 was hands-on for some at Gamescom in August 2014. However, in the years following that preview session, the zombie sequel has hit a rough patch, with development moving from the original studio Yager to Sumo Digital, and then last year from Sumo to Dambuster Studios. Suffice it to say, the Deep Silver project is in a state of turmoil.

Since its reveal, Techland, the studio behind the original Dead Island, has developed 2015’s Dying Light, as well as its recently delayed sequel, which is still possibly slated for later this year. The original Dead Island was a huge hit, so regardless of who ultimately ends up being the developer, there’s no way we won’t eventually see a sequel, which at this point would likely be on next-gen hardware.