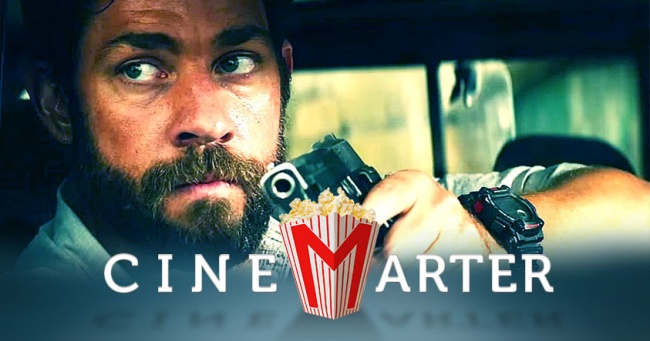 It’s a little bit shocking that Michael Bay hadn’t previously made a movie all about American soldiers shooting bad guys, isn’t it? I mean, this is a man who made giant robots the background to military movies in four straight Transformers movies, and it’s only now, with his 12th film, that he’s finally making a flat-out military film? Does that strike anyone else as odd? I mean, Pearl Harbor came kind of close, but it’s nothing compared to 13 Hours: The Secret Soldiers of Benghazi.

This one is based on the terrorist attack on an American diplomatic compound on September 11, 2012, during which time six mercenaries led a defense to save a few dozen lives. As is to be expected, we follow the six men both on an ordinary day, and then the day during which everything seemed to go wrong. It takes about 45 minutes to get to the actual premise of the film – a setup used both to juxtapose the events that happen later with the relative peace at the start, as well as to try to establish these six individuals as flesh-and-bone people to whom we can relate. Well, one of those goals is accomplished. 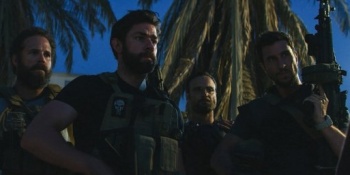 Watching a “typical” day at the start makes the hell to come more impactful. It gives the audience perspective – an idea of what usually happens. It’s not exactly pretty, but it’s nothing like what’s going to happen. However, trying to characterize these individuals falls almost entirely flat. They’re all bearded white muscular dudes who all have wives and kids back home. About the only one you’ll recognize from start to finish is John Krasinski‘s character, and I couldn’t even tell you the character’s name without looking it up. The two reasons you’ll remember him are (1) it’s John Krasinski and (2) his wife is also pregnant – a key difference, to be sure! It’s an odd thing, too, because the film isn’t really about individuals – it’s about a group, and about the military. Trying to characterize them seems like a pointless endeavor.

That 13 Hours: The Secret Soldiers of Benghazi is anywhere close to as engaging as it is should come as a minor miracle.

After the setup, the film consists of two parts: firefights and waiting for more firefights. Soldiers shoot guns at other people shooting guns, explosions go off all around them. More guns! More explosions! The often handheld cinematography gives you the feeling like you’re there – which, I’d like to point out, is how it’s supposed to work. Horror films, take note. 13 Hours gives us an intimate view of how these events transpired.

For the audience, that means lots of Shooty McBangBang followed by brief periods of reflection and “character moments,” followed by more fireworks and gunfire. But the intimacy makes it, at least for a while, quite compelling. The camaraderie and teamwork from these individuals, the incredible physical toll this event took on them, and how real it all feels is engaging. For a while. But, like most of Bay’s filmography, it goes on for too long and gets too repetitive to stay that way. At 105 minutes, we’ve got a far better film than we do at 144. Shooting at various unnamed baddies can’t hold our attention forever. Bay really needs to hire a more ruthless editor.

Perhaps most surprisingly is the lack of politicizing done by 13 Hours. If it doesn’t personally matter to the individuals within, the film isn’t interested. Americans going into Libya? It doesn’t matter. A lack of support from basically everyone else? That one matters, but only because it means no reinforcements. Bay doesn’t want to make any grand statements – or even shed much insight nto the whole Benghazi situation. Any commentary here is like a blind squirrel finding a nut. This real-world event is used so Michael Bay can film the American military shooting or blowing up a bunch of people whom he can morally declare deserve to die. It’s war porn.

That 13 Hours: The Secret Soldiers of Benghazi is anywhere close to as engaging as it is should come as a minor miracle. This isn’t Michael Bay’s best film, but it’s a lot better than most of his filmography. That might not be saying a whole lot, in all honesty, but it’s watchable and compelling for most of its running time. It feels intimate, and you can tell that Bay’s actually enjoying filming this; that’s when he’s at his best. He’d rather be showing us a picture about soldiers than giant robots; that’s why he’s so focused on the soldiers in the Transformers movies. These types of passion projects – like Pain & Gain, too – result in his best work. But, hey, money talks.

Bottom Line: Watchable and intimate, although too repetitive and long to be a full success, 13 Hours: The Secret Soldiers of Benghazi is surprisingly decent.

Recommendation: If you’re in need of another “Hooray, American military!” movie, well, here’s another one. It’s moderately successful. It’ll be better than almost everything else coming out in January, so … that’s something!