The fifth hour of 24: Live Another Day has just ended and in true 24 fashion, nothing is as expected and nothing will ever be the same. Just when they’ve wrapped up a few story key storylines, it’s time to throw everything back into the blender. And, I might add, thankfully. The whole plot around no one believing Jack about the truth of these drones was becoming tedious and anxiety inducing. Luckily, everyone now knows the drones have been hijacked and can now get on with the actual hunt for Margot Al-Harazi.

She’s not making that easy. Having just killed her son-in-law for betraying her, as well as subsequently ambushing a herd of CIA operatives, she only has a few moments to rest her tense muscles before she starts questioning the loyalties of her own children. Her son starts to express concern for his sister, Simone. This is when I realized something: Margot Al-Harazi is really just the Joan Crawford of terrorism. She’s an aging diva and former beauty who thirsts for respect and power yet cannot find either from the two people from whom she most desperately desires it: her children. Being at the top is lonely, and it’s even lonelier when killing your children needs to be a viable option for getting what you want. And in Margot Al-Harazi’s case, she wants revenge.

This episode picked up a storyline that’d been dropped a few episodes ago, that of President Heller’s deteriorating mental faculties. Thus far, he’s been the only voice of reason and the only believer of Jack Bauer’s in a pragmatic, get-something-done, fashion. I understand that no character can be completely one-sided, so schematically drawn, and therefore President Heller needs some sort of narrative conflict or he’s just a Santa Claus for Jack Bauer. The onset of Alzheimer’s is uncomfortable to watch, but that said, I like what they’re doing with his character. He is a father figure to Jack Bauer, there for Jack when needed, listening to him, trusting him, and even, as we find out in this episode, giving him all the clandestine support and resources needed to locate Margot Al-Harazi. It’s the fatherly relationship between President Heller and Jack that makes this so heartbreaking: since we’re on Jack’s side and Jack is the valiant core of the show, President Heller is our dad, and there’s nothing worse than seeing your own father suffer. 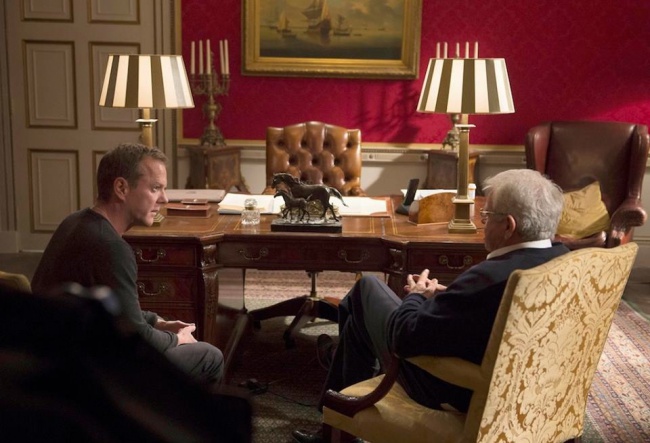 As I mentioned, Jack is given carte blanche (since the raid on the manor didn’t work) to find a bearded fellow named Rask, an arms dealer who works with Al-Harazi. Jack, as it turns out, has also been working for Rask for two years. Oh Jack, always toeing the line between good guy and bad guy. Jack is on his own side – the side of truth. And sometimes, to get to the truth, you need to do bad things, especially with all the red tape and brick walls Jack faces when trying to bring a matter of international importance to light. Besides, Jack’s two-year involvement with Rask becomes the only lead the feds have. Gotta give it up to President Heller for recognizing that, even with his ineluctable memory loss.

This brings us to international relations. I’d been wondering when the “ally spy” story was going to rear its ugly but oh-so-present head. The Prime Minister, played still by the delightful Stephen Fry, receives word from his top aide (a young woman who looks shady as hell) that classified information on the health of President Heller is in their possession. This just adds to the paranoia at the center of the maze: you can’t even trust your closest ally to mind his or her own business and President Heller is not observant enough to realize the Brits are spying on him. Now aware of the fragile sandbank of President Heller’s mind, the Prime Minister decides to keep an eye on Jack Bauer’s undercover operation.

Speaking of Jack’s undercover operation, one of the reasons he wanted to work under the cloak of secrecy is that he has to drug Kate Morgan and hand her over as collateral to Rask. She’s a diversion to buy time so Chloe can hack into Rask’s bank account and see if there have been any recent transactions from Al-Harazi. Kate agrees to this and stabs herself in the neck with a syringe filled with Propofol, which you probably know as the drug that killed Michael Jackson. She’s handed over to Rask who immediately instructs his men to wake her up and string her up by her handcuffed hands. Staying right in step with one of America’s greatest film and television traditions, a beautiful, intelligent woman is tortured and threatened with her life by a bunch of angry, powerful men. Granted, everyone has it pretty bad in this show, but as I was watching I just said to myself, “Of course, she’s the one who gets tortured.” The scene is short, and not much torture is inflicted upon her, but watching her be strung up and stabbed is pretty disturbing. The only thing that saves the scene is Yvonne Strahovski’s acting: From the moment she administers the Propofol to when she stabs her assailant, you’re never once worried that she won’t make it out of the situation alive. She’s definitely got my vote come Emmy season. 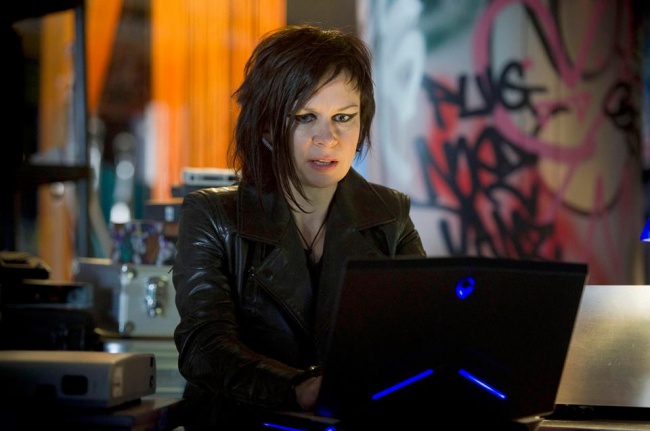 While all this is going down at one of the infinite abandoned, scary warehouses in London, Margot Al-Harazi has more problems of her own. Naveed, the son-in-law she’s just killed, has a sister, and the sister may be on to her plot. Ever trying to win back her daughter’s loyalty and obedience, Margot instructs Simone to find out what Naveed’s sister knows and to kill her if necessary. This is where Simone starts to crack. Just how far is she willing to go for her beliefs? She’s killed a man while he was taking a leak in a public restroom, betrayed her husband, and then watched said husband get shot on her mother’s orders all within the space of five hours. I can only imagine that the theoretical planning of the drone attack was far more romantic and exciting than the grisly requirements of the task itself. Margot doesn’t care. Revenge is her white whale, and nothing, not even her own children, will stop her.

The British government, not fully comprehending the concept of “undercover,” take matters into their own hands when they see that Kate has been drugged at the request of Jack Bauer. They almost botch Chloe’s chance at getting the essential information for catching Margot Al-Harazi, but of course Jack (who is looking a little Botox’d in this episode) saves the day by pressing enter at the last moment. The information reveals a phone number, which means a phone, which means Chloe can trace it. Chloe, like a wizard in a control tower, manages all from the semi-safety of her own abandoned, scary warehouse, making complicated requests appear out of thin air. She’s clearly Jack’s only ally, and this has me wondering why her and Jack’s relationship hasn’t been explored since the beginning of the season. Now, they’ve definitely got their hands full, but I want to see some development on that front soon. They deserve to be trusted by each other.

Trust is coming up a lot in the episode. Maybe the reason Jack and Chloe will always remain distant, why Jack is truly distant from anyone, is because he only trusts himself at the end of the day. He is all he’s got, and as more and more people begin to realize this (thankfully, President Heller does) hopefully they’ll begin to trust themselves.

Simone meets up with Naveed’s sister, who makes it very clear that she’s in the dark about Naveed’s plans or personal activities. Simone, relieved, calls her mother to get permission to not kill Naveed’s sister. Unfortunately, Margot still has the crazy eyes and says to kill her anyway. Simone pleads to not have to do it, but Margot (surprise) doesn’t care. She doesn’t care if her daughter is now killer, and she doesn’t care that part of Simone’s job is to now kill Naveed’s sister and her own niece. How far does she go? How far would you go if you’d been forced to believe a certain thing? Well, Simone is able to kill her sister-in-law, but her niece flees. An act of God ends the chase, and Simone is left in the middle of the street, having just been hit by a bus. This out-of-nowhere bus attack speaks to the idea that Simone is doomed: If she just followed what dear old Mom said, she’d be back at the country estate having cucumber sandwiches and tea. After all, it is tea time.

And speaking of trust, Benjamin Bratt’s character, Agent Navarro, has always perplexed me. I guess I was waiting for Navarro’s character to develop more because the powers that be wouldn’t have cast such a major star in such a supporting role. So, I guess this is something the viewer can still trust: there’ll always be a twist in 24. The twist finishing off the fifth hour is that Navarro planted the information that implicated Kate’s husband. Let’s make the web larger and tighter. Let’s make the good guys the bad guys and the bad guys the good guys. That’s 24, and that’s exactly what makes it awesome.