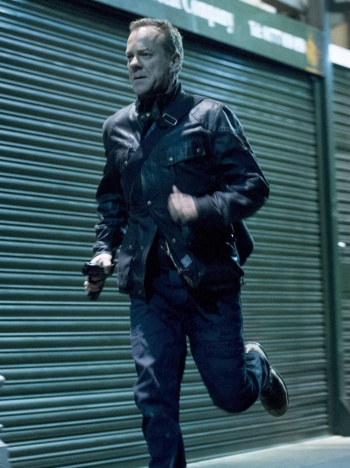 With only a few hours left of Live Another Day, it’s time for our characters to finally start trusting each other… if only to advance the plot.

The night is almost at full bloom on 24: Live Another Day. In last night’s episode, Kate finally learned the truth about her husband, Mark finally confronted Audrey about her feelings for Jack, and Jack is still doing everything he can to make sure the world doesn’t blow to smithereens at the hands of one of his greatest foes, marking the return of fan-favorite villain. If you haven’t caught it yet, this hour is definitely worth watching: You can watch all the intense action on Fox.com or Hulu or watch live on Fox at Mondays at 9/8c.

Remember that one of the several large themes of 24 is the relationship between trust (or the lack thereof) and belief. No one trusts each other, and getting someone to believe in them has kept the good guys back for too long — when the truth needs to be heard to save lives, the emotional and mental red tape keeping avenues of communication encumbered becomes ridiculous. That is, of course, unless a series is about end and we have to get the plot moving toward a few big reveals.

My point is Jack told Kate that Navarro took the security device and she instantly believed him. It’s nice to see someone believe Jack for a change. This sets up Kate’s second revelation in the episode: it’s only a matter of time before she discovers Navarro sold her husband up the river to protect himself. It was Navarro who sold secrets to the Chinese, not Kate’s husband. Navarro is working a ton of angles here, and it’s surprising to think the he wouldn’t end up being tortured at some point, but hey, someone stupid enough to think he can escape Jack Bauer has a certain amount of pain coming to him, you know what I mean?

Speaking of trust, I can’t understand what Chloe sees in Adrian. He’s so skeezy it’s not even funny. Besides, he sort of looks like a scarred buzzard. But is he actually a victim? In preparing to recover the device from Navarro, he reveals that Yates (the hottie killed at the beginning of the series) stole the device from Navarro who actually created it. It was Adrian’s baby, and he wants it back. He reveals what it’s capable of — mass human destruction, obviously — and Chloe believes him. But is she ready to go along with Adrian using the device for a vague good?

It doesn’t really matter seeing how Navarro’s belief in Adrian is about to be dashed with an obvious betrayal (sorry, Navarro, there’s no escape here), and the wheels of destruction will be set in motion anyway. Poor Navarro. Hey, at least he’s got a great body.

Serendipitously, Jack spots Adrian and Chloe running away with the device while Navarro is arrested. This is no time to take out your aggression on Navarro, Jack! You’ve got a moody guy with sunken cheeks and an old friend with a bad haircut to catch up with! But is she a friend? Chloe’s with Adrian, after all, and Adrian has the device — Jack’s trust is beginning to fade. She couldn’t have been a bad guy this whole time, right? I mean, she went through some tough stuff losing her family and all, but was that enough to turn her to the dark side?

Meanwhile, it’s time for Kate to learn the truth about her husband. Offering the best plot payoff of the entire show, Kate’s discovery of Navarro’s dealings, and her subsequent wrath against him has been the greatest moment of Live Another Day so far. After an awesome punch, she pulls a gun on him — much like she did with that doctor to get Simone talking a few weeks ago — forcing him to reveal there’s a tracking code on the override device he gave to Adrian.

Even though she now knows the truth, Kate still blames herself for her husband’s suicide. In the episode’s most poignant moment, as she and Jack are heading to get the override device, she reveals that the moment her husband decided to commit suicide was the moment he realized that she no longer believed in him. Not only is it awful when someone doesn’t trust you have the truth in a high-octane situation (i.e. most of 24), but it’s potentially deadly when someone you love no longer believes in your innocence.

Back at US Government HQ, Mark confronts Audrey about Jack. Since when does he (practically a double-agent) get to flaunt his trust issues all over the place? Sorry, Mark, that’s only for the good guys, and Audrey is definitely one of the good guys. Since she isn’t having any of Mark’s tantrum, he goes to the stereotypically scary Russians and gives them Jack’s location — all but signing Jack’s death warrant. That’ll show Audrey for having the warmies for Jack Bauer! See what else lack of trust can do? It can get the Russians on your ass, and no one wants that. 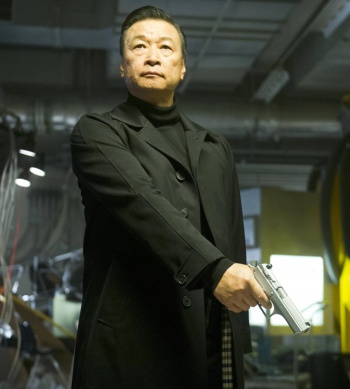 This is when things get juicy. With the device in hand, Adrian and a weary Chloe head back to Open Cell to sort out how exactly Adrian wants to rule the world. Once back, however, they’re surprised to discover that all of their compatriots are dead. Was it Jack who found them? Was it the CIA? Was it the Marines? Nope, it was Cheng Zhi. You remember him, the one who tortured Jack and Audrey for like a year back in the day, the one whose own government had arrested because he’s so goddamn psycho? Well, he’s back, and my goodness is it good to see a familiar, albeit villainously scarred, face. I loved that Lady Stark was the first baddie we focused on, but it feels great to see a true 24 villain back on the scene.

Adrian and Chloe are stunned. To make a point, Cheng shoots Adrian in the leg, and frankly this skeez had it coming. I was getting real sick of him lying to Chloe — we’re about to discover more — and I was getting even more tired of him being in positions of random power. No one likes that.

Even in the face of Adrian being shot, Chloe doesn’t want to help Cheng, which is understandable seeing that he’s about to destroy all of humanity. Well, it’s time for Chloe to learn to trust Adrian one last time. As he’s bleeding from his wound, he reveals that the death of her husband and son was just an accident and not a plot against her. It was just a plain accident. Poor Chloe can’t catch a break. She’s either plagued with bad eye make up, having to execute complicated hacker commands in a pub, or finding out the true circumstances surrounding her family’s death. Just when she realizes she can trust Adrian, when her belief is finally restored, Cheng shoots him in the head. At that moment he uses the override device to launch a missile at a Chinese carrier that will originate from the USS Massachusetts.

Can Jack get there in time to sort all of this out? It’s hard to say. Mark discovers that Jack is running the whole mission to save the world at the request of President Heller and makes a desperate attempt to call the Russians off, but not before they run into Jack and Kate (en route to stop Cheng) and there’s an all out gunfight. How can it all end in two more hours!?