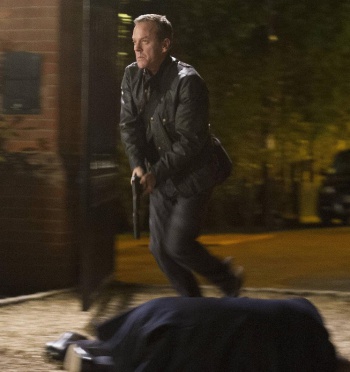 Cheng is back with a vengeance in Live Another Day, but how much chaos can he cause with just one episode to go?

If it feels like this “day” in 24: Live Another Day has been going on for weeks, that’s because it has. It’s hard to believe that all of this is happening in one day, especially since the episodes involving Margot Al-Harazi feel like another century. That said, this day is finally starting to wrap up.

Last week, everything was turned on its head when Cheng, a classic 24 badass baddie turned up again in all off his scarred-face, black-wearing glory. He killed Adrian, took control of the override device, and bombed a Chinese carrier from a US submarine. This week, we get just far less in terms of progressing the plotline. Last night’s episode wasn’t as great as last week’s (you can only have so many amazing reveals per season) but it didn’t skimp on tension or build. You can catch episodes of 24 Fox.com or Hulu or watch live on Fox at Mondays at 9/8c.

So, Jack Bauer is a smart guy. We all know that. Last week’s shootout, the one that interrupted he and Kate’s journey to take custody of the override device, was still going on as this episode began. A few great gunplays later and the shootout is over, even though it looked like curtains an hour ago for our heroes. It only takes Jack a matter of time before he realizes Mark, the man married to the woman he used to love, is behind the whole thing. Jack just doesn’t have time for all that, Mark, so you better be damn sure you’re not around when Jack gets back to HQ.

While that’s happening, Chloe, clever as ever, is able to snatch a cell phone when Cheng decides to leave Open Cell after discovering the tracking device Navarro (sadly absent from this episode) installed therein. Every time someone mentions that Chloe should live because she’s smart makes me glad: ‘m glad Adrian died, but I’m even more glad Chloe is alive. The show’s take on intelligence hasn’t been very gratifying since the show’s genesis. The smart people are often the ones not believed — and when they are believed, they are more often than not exploited by evil forces or just outright killed. The message ends up being that you can be smart but it’s going to put you in a lot of awful positions. You may end up dead, or you may end up a hostage to a terrible man who used to torture our hero and then his romantic partner… but nothing good happens to the clever ones. Still, Chloe is the brains, and she’s not going to die because even Cheng needs the stuff in said brain.

Soon after, we get the scene we’ve all been waiting for, and that’s when Jack can finally confront Mark. Jack is calm when the scene begins, but it only takes the closing of a door for Jack to pull a gun on Mark, forcing a confession. This is the other benefit of being intelligent. If you can survive, when your day finally does come, you get to be a badass, which is always preferable to being an idiot, wouldn’t you say? 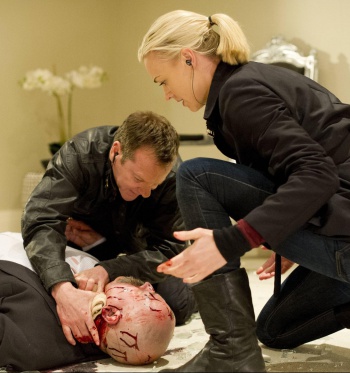 Mark crumbles under the minor pressure, and his father-in-law, President. Heller, wants him arrested for treason, which made this reviewer very happy. This raises a question in my mind, though: Is President Heller among the intelligent people on this show? I want to say yes, but then again, I’m not sure he’s allowed to be smart what with his Alzheimer’s diagnosis. I mean, when he fumbles his pills at another point in the show, it’s downright sad. That said, it’s plainly clear that Jack is the smartest one on the show, and because of that Jack decides that the best thing to do is use Mark. Remember, Mark forged the President’s name on documents that would allow the Russians to bring in (and kill) Jack, effectually making Mark a conspirator with the Russians. Jack wants Mark to use that “good”-will and defect to the Russians so Jack can get a location for Cheng, with whom (surprise!) the Russians are also working.

Why is it always the Russians? I mean, they’ve just been the bulky gang of misfits in this series everyone is afraid of, and I get that, but why is it always them? It’s so James Bond to just say that the Russians are bad. In this current world of surveillance and truth-revealers like Edward Snowden, it’s hard to believe that any world power is all good or all bad. I mean, the idea that the President of the United States had access to the president of Germany’s cell phone conversations and texts is something right out of a spy novel and could easily be a plot point in an episode of 24. It’s so outrageous to think of things like that now that they can only be true. Maybe 24 is a way to look back, a way to pretend that “Russia” as an idea is still dangerous and still looming in the shadows, waiting to pounce.

Plans are made and Mark is fitted with awesome spy gear to defect to the Russians, but In a rather tedious portion of the episode, there’s a scuffle and Jack and Kate have to take out some security guards. Anatol, Mark’s contact, is gored with a shard of glass, exclaiming that the Russians will never forget what Jack did to them. He dies before he can be of any use. Isn’t that always the way?

And what about that other beacon of intelligence, Chloe? Well, she’s in a van headed to an undisclosed location. In a daring move that almost read as unbelievable, she manages to get away from Cheng by rolling down a hill. Don’t worry, her smarts-filled head is still intact and it looks like she’s going to live to think another day. That’s what this series should have been called: 24: Live to Think Another Day. With nowhere to go — since Open Cell should now be called Open Wound — we can only hope that she’ll return to the platonic arms of her brother in vigilante justice, Jack Bauer. 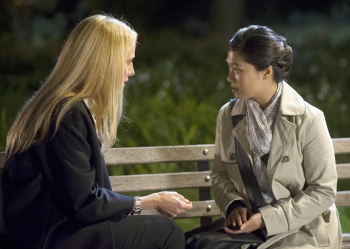 The show ended with Audrey finally doing something more than just standing around looking worried. She decides that she’s going to help the situation by reaching out politically to a contact she has at the Chinese embassy. Under the cloak of night in beautiful park she meets with Jiao, a quiet woman with a British accent. They soon agree to some terms: if the US can provide Cheng and the override device then the Chinese will forget all about the fact that, on paper, America attacked a Chinese carrier. Everything seems hunky dory until everyone around Audrey, including Jiao, is shot and killed. In her frozen panic, she gets a phone call with a familiar voice on the other end.

It’s Cheng! Remember, he tortured her for upwards of a year back in the day. She’s obviously terrified, but when he instructs her to sit down, she obeys.

Though this wasn’t that great of an episode, I have no clue how they’re going to wrap this up next week in just one hour. I had heard tell that next week’s episode wasn’t in real time — that, instead, it was a wrap up show spanning days — or that it lasted longer than an hour. From the preview, it looks like just another hour in real time, so we’ll see how just they manage to wrap everything up in just one more episode.