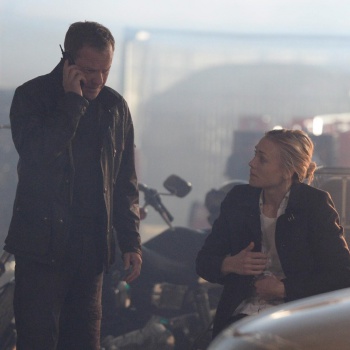 Last week’s episode of 24: Live Another Day ended with a bang. To be more specific, Simone, whose mother Margot has quite recently gained control of six American drones, was hit by a bus while chasing her niece, whose mother Simone had just stabbed to death. How’s being hit by a bus for dues ex machina? It reminds me of that scene in The Devil Wears Prada in which Emily Blunt’s character is hit by a taxi, Hermes scarves flying hither and yon, suddenly making it okay for Anne Hathaway to go to Paris. Sadly, conflict in 24 has nothing to do with Paris or fashion (maybe that’s another spin-off). Lives are at stake here people!

Simone and the girl she was following are taken to the hospital. Now a sitting duck, Simone has found herself the focus of almost every player’s action. Her mother, Lady Stark, now sees her as a liability. Simone may tear down everything her mother has tried to build. And that’s the theme of this week’s episode: what do we do with the entities that might ruin all of our plans? In the real world, one might confront them, maybe even bribe them, but in 24 if your daughter may put your blessed plans in jeopardy, the obvious recourse is to kill her with missiles from a drone. If only life were that easy, huh?

Having been betrayed earlier in the day by Simone, Margot decides that nothing would work better to make sure everyone dies than to kill her daughter while killing thousands of others at the same time in a two birds, one stone kind of deal that, when you think about it, makes prefect sense for a terrorist. However, just to ensure that nothing goes wrong, Margot also hires an assassin to go and sort her out. 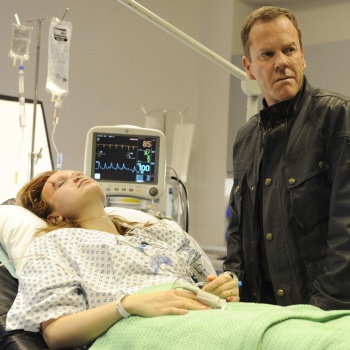 But do we really think Jack Bauer is going to let this crazy lady out in the moors kill her own daughter? Possibly. But, in killing her, Margot would also be killing his only lead, and there’s no way Jack is going to let that happen. Still, he needs help, and luckily, President Heller is still on board as a believer in Jack’s truth. In asking President Heller for help, Jack informs him that the Brits were sort of the reason his last mission was a bust. The Brits, you say? President Heller is having none of that, so he gives the Prime Minister a stern talking to, to which the Prime Minister responds with a question on President Heller’s mental health. Ah, Margot may have her daughter as a loose end, an irritant to her desires, but President Heller has is own mind with which to contend. It would be awful to realize your daughter is betraying you, but wouldn’t it be worse to realize your mind is beginning to act against you? What does one do? You can’t drone strike your mind, so President Heller sits down with his daughter and son-in-law and tells them to apprise the vice prez of the situation, implying that he’s going to step down. If only Margot Al-Harazi had that option.

That said, President Heller still has enough of a mind to give Jack everything he needs to breech the hospital and go pump Simone for information about her mother. Will she crack? Is this the end for Margot? Hardly. After donning scrubs and questioning her with no results, Jack tortures Simone – who, P.S., has had a rough day so far -by squeezing her finger stump – you know, the one created when her mother instructed a grunt to chop it off – so hard that she loses consciousness. Well, I guess if one can’t get a daughter to roll over on her mother, one can at least inflict paint to the point of passing out. I mean it’s all in a day’s work for Jack. He answers to no one but the greater good, okay? Kate doesn’t see it that way and is pretty grossed out about the whole thing. So, Kate, do we talk about your husband now or later? 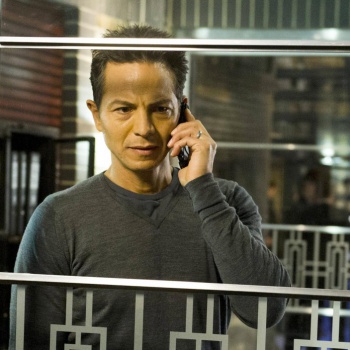 Later, because just at that moment, Jack notices this assassin-lookin’ guy lurking around the hospital and realizes Simone (who he’s just knocked out) is in real danger. “You in danger, girl!” He attempts to stop the assassin in a quick chase through the hospital, but it only takes a few minutes for the assassin to be shot dead by a bobby. What now? Well, Jack grabs the assassin’s cell phone and discovers that Margot is going to drone strike the hospital in eight minutes! Holy filicide, Batman! This clearly doesn’t give Jack much time, so he races back to sleeping Simone, picks her up, and narrowly escapes the drone attacks, of which there are four total. He may have escaped, but sadly, the drones have wreaked serious havoc on London. It was painful to see London in rubble like that, patients clinging to stumps where arms used to be, bleeding into the street. As one of the planet’s magical cities, it truly made me angry to see what Margot (who is British!) do that to such a magnificent place. It makes me wonder why this didn’t happen in D.C. or New York? Why England? I mean, it makes sense for the story, but after years off the air, Jack Bauer comes back… to England. Ah well, who am I to ask such questions, eh?

While Margot’s daughter starts to betray her, and while President Heller’s mind begins to betray his critical thinking, Mark, the president’s son-in-law is about to be betrayed by his own thirst for power. In a meeting with the Russians with whom he’s trying to negotiate, he is called out for forging the president’s signature on official documents. Don’t try to run one over on the Russians, Mark. Never a good idea.

Speaking of loose ends, Navarro, whom last week we discovered is working for a mysterious man with phone access is beginning to realize that Jordan, the sinewy CIA agent who’s been helping Kate this entire time, is about to discover that Kate’s husband’s departure may have been less than above board. No kidding. This is 24, after all. Only in 24 does a man driving a dying terrorist around escape four drone attacks and only in 24 does the entire CIA not realize one of their own is a bad seed. But, is Navarro? Is he really bad? Or is he just working under orders? And whose orders? Well, we soon discover it’s none other than Michael-freakin’-­Wincott, Chloe’s boss. So that explains why he wanted to get out of the not-Wikileaks headquarters so fast! That’s why he didn’t want to get involved with the CIA. Somehow, Michael is wrapped up in all of this, and just as Margot doesn’t want her daughter ruining all of her plans, Michael Wincott doesn’t want this model-looking dude discovering what really happened with Kate’s husband.

To that end, Navarro informs Jordan that he’ll be going out into the field on a surprise mission. Really, Jordan? You’re falling for that? Well, at least he was cute. Jordan, the entity about to burst another bubble in the world of 24, has to be dealt with, and in no short order, he’s shot and falls into the river. So long, Jordan. Or wait, his body never emerges from beneath the waves. He’s alive! No matter how hard we try, there’s always someone or something trying to destroy everything you’ve done. If only we had assassins and drones and armies.

Then again, none of those things have helped President Heller. He begins to realize that the only way London isn’t going to be leveled by this crazy lady in the countryside is to give himself up to her. He instructs Jack to come in and see him and then calls Margot Al-Harazi himself, having made the decision to turn himself over. Is that the lesson? If you can’t stop the breech, give in to it? I’d like to think that, but this is 24, and that’s just not how shit goes down on this show.