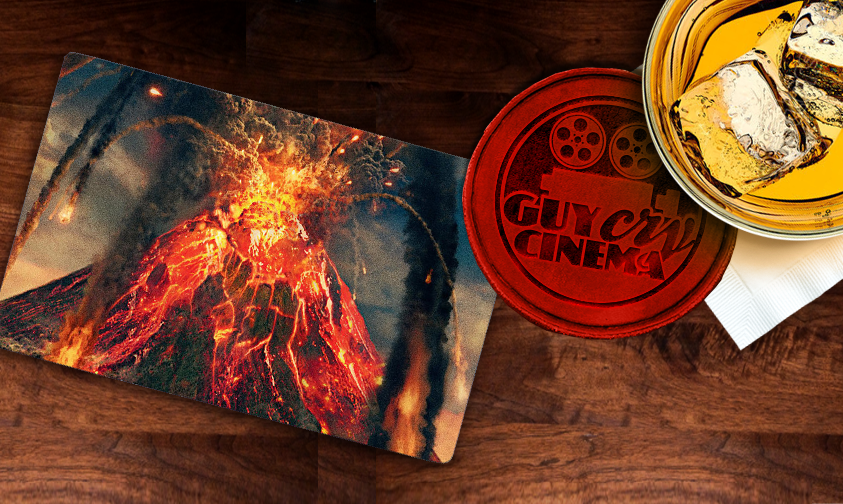 What natural disaster movies will make guys tear up and reach for the Kleenex?

For all the violence and war that cinema loves to glorify, it’s easy to forget that there are some movies where the massive death and destruction is in no way our fault. Sometimes Mother Nature just gets cranky and takes her mood out on us hapless humans. Mankind in general and guys specifically view themselves as mastering nature, and filmmakers know this. Even in the minds of climate change deniers, there’s a small worry that someday nature is going to get fed up with us and break bad. When that day comes, how we react to the disaster is the subject for a great many gripping films, many of which have very touching and tear-inducing moments.

Shut up, it was a good movie! Boasting such acting greats as Stanley Tucci, Aaron Eckhart and Hilary Swank, it’s a wonder this film got past its casting budget. The idea is classic disaster movie with a twist: The core of the earth (the spinning engine that gives us our radiation shield from the sun) has stopped spinning. Thanks to a ship made of Unobtanium (not kidding, this film used that term years before Avatar) our intrepid heroes dig to the core to set off nukes to get it spinning again. Because why not?

Dodging clichés and questionable yet passable CGI, there is one part of the film that shocked me at how heart-breaking and real it was. It was better than a movie like this deserves to have. Aaron “Two-Face” Eckhart’s French friend is in a section of the earthworm-like ship that is compressing rapidly due to damage. Despite his pleas to Million Dollar Captain, the door stays locked to protect the rest of the ship from the same fate, yet the video feed still works. Aaron has to talk and see his friend get compressed to the size of a grain of sand, and the scene is not quick. Haunting, dramatic, and painful to watch. Sure, it turns out the core slowing down was a man-made whoops, but I still view it as nature breaking.

The overly-dramatic younger brother to Armageddon. Asteroid coming towards Earth, Frodo Baggins finds it first and somehow that means he matters, and Uncle Sam sends nukes up to fight it. Man, we love us some nukes! Unlike Armageddon however, the nukes just split the rock in 2, and the smaller piece ends up full-on rock humping the Pacific Ocean. How does this translate to a truly sad moment?

It’s not when the astronauts realize they must sacrifice themselves to blow up the larger chunk, nor when the guy saying goodbye to his child went blind and can’t see, nor Tasha Yar and her husband looking into each other’s eyes as the end comes. It’s when Sharon Stone’s dad, who we’ve learned was a bad husband, poor father and all around failure as a man, stands on the beach as the shock/tidal wave approaches. This man holds his daughter to comfort her, and unblinkingly looks the wave on with such balls, we wonder if the wave will split in two when it hits him (it doesn’t, but still). That’s such machismo in the face of death after a life of mistakes, we can’t help but tear up in admiration.

This might surprise a few of you, since the film was poop in almost every category other than special effects, and even those were a bit much. With the horrible science of “neutrinos mutating and acting like microwaves,” and John Cusack being way more important than he deserves to be, the film was a large pill to swallow. That being said, there’s one part that hit me in the feels.

The film starts with John divorced from his wife, and a new guy taking his place. The thing is, the trope in films is that the new guy is a dunce, or useless, or otherwise lesser than the protagonist. This helps us root for the hero to get the girl back. You know who doesn’t fit any of those descriptions? The new guy!

He flies a plan several times, saving Cusack’s sack several times. He is great with Cusack’s kids, and seemingly loved by his wife. At the end of the film he gets ground into a ship’s gears, drowning and being crushed trying to save everyone. This guy had no downsides, and when he dies like a punk after saving everyone again and again, Cusack just looks at his ex-wife with a shoulder-shrug of “Oops?” I’m just saying, sometimes step-parents aren’t evil, and this guy deserved to live more than anyone else in that movie.

Remember when Tommy Lee Jones was an actor, instead of a melting spokesperson for financial institutions? Pepperidge Farms remembers. And me.

Los Angeles was filled up with so many phonies that the Earth said “Nope!” and decided a lava party was the only solution. Despite the inconsistency of how quickly lava destroys things and how effective human blockades would be at diverting said hotness, it’s a fun film. And much like Deep Impact, one move of utter man-balls moves me to tears every time.

At one point, Los Angeles MTA Chairman Dude is trying to save passengers trapped on a train that’s sinking into the very lava he said wouldn’t be an issue. The guilt of this error leads him to jump into the lava, and throw the train conductor to safety. This dude is standing in LAVA, and saving people as MELTED ROCK eats him alive. Dude-props, brah.

This one was remade with Kurt Russell, probably needing money for another lower jaw enlargement surgery. I’m talking about the original. This is a film where a cruise liner gets hit by a wave and flips over. That’s all. The whole movie is people trying to get out of a slowly sinking upside-down boat. Despite that unassuming starting point, the film is pretty great and there’s a part that definitely makes guys scream up to the heavens in anguish.

Being that the boat is upside down, escaping means getting to the bottom of the ship. In a final area that requires a prolonged dive through a flooded engine room. Enter Elderly Jewish Couple, because that’s who I think of when I think “Action Hero.” Usually in films such as these, the elderly are there to impart wisdom, but no one hopes they live over the younger crew. They’ve lived their lives, right? Well, these two were on their way to Israel to visit their two-year-old granddaughter for the first time, so they still have a cinematic reason to live.

The woman was an ex-competitive swimmer (maybe 30 years prior) and she wants to go but her husband goes instead, cause he thinks he’s the boss. He’s immediately immobilized by a cave in, because he’s not the boss. SHE’S the boss. She not only swims to save him, but also unlocks the whatever that everyone needs to survive. THEN SHE HAS A FREAKIN’ HEART ATTACK! Again, to be clear, she doesn’t drown, despite the movie being about a sinking boat. She saves everyone like a boss, then her heart explodes under the pressure of being so awesome. Sorry grandkid, looks like you only get to meet grandpa.