There are at least 176 known natural moons orbiting planets in our Solar System. While the mystery of what lies on the dark side of Earth’s moon was solved thanks to photographs from space probes, Jupiter, Saturn, and Uranus have moons that raise questions to which we still have no convincing answers. What are those strange lines on Europa? Why do Io’s volcanoes seem to be misplaced? What is the origin of that colossal ridge on Iapetus?

Let’s take a look at five of these mysteries. 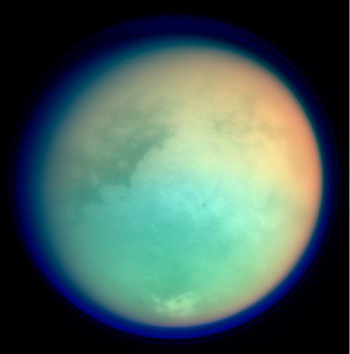 Titan, the largest of Saturn’s 62 moons, is the only natural satellite in our Solar System that is known to have a dense atmosphere – and we don’t know why.

Typically, small bodies like moons don’t have the gravity to “hold onto” an atmosphere, which would escape into space. Titan is 80% more massive than the Earth’s Moon, with a diameter 50% larger, making it the second-largest moon in the Solar System after Jupiter’s Ganymede. This may help explain how it retains some of its atmosphere, but Mars has only a tenuous atmosphere and is even larger than Titan.

The other factor that comes into play is the presence of a magnetic field. The Sun constantly emits a solar wind – a stream of charged particles – that bombards planets and moons, stripping away atmosphere. But planets with magnetic fields are able to deflect most of the incoming solar wind. Earth’s magnetosphere is generated from the motion of its liquid outer core around its solid inner core, but Mars, whose core is solid, lacks a protective magnetosphere. While Titan doesn’t have a magnetosphere of its own, the moon does spend 95 percent of its time inside Saturn’s magnetic field.

But even if we could explain why Titan hasn’t lost its atmosphere, we don’t know how it acquired such a dense atmosphere to begin with – one that is about 7.3 times more massive than Earth’s on a per-surface-area basis. We also don’t know why Titan and Earth are the only two bodies in the Solar System with dense atmospheres that consist primarily of nitrogen, weighing in at 98 percent and 78 percent, respectively. 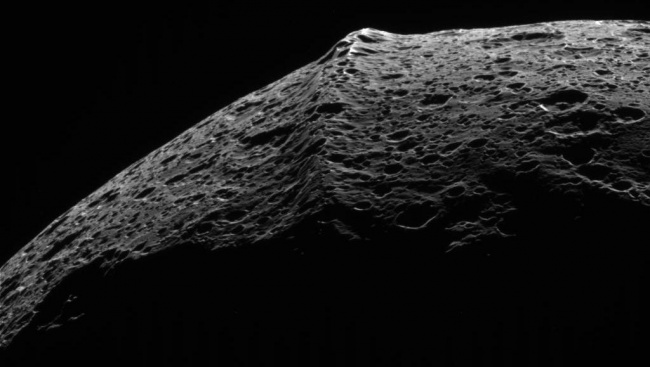 Saturn’s third largest moon, Iapetus has an unusual feature that continues to puzzle astronomers: a massive ridge that runs three quarters around the moon’s equator. Combined with the moon’s odd shape, the ridge gives Iapetus the overall appearance of a walnut. 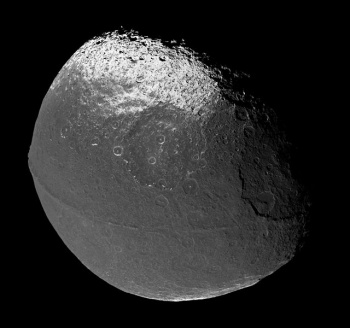 1,300 km in length, 20 km wide, and 13 km high, this ridge is three times the length of the Grand Canyon, twice as wide as the Amazon river during the dry season, and one-and-a-half times the height of Mount Everest. The ridge’s peaks are amongst the tallest mountains in the Solar System, just behind Mars’ Olympus Mons volcano, which is 22 km high.

Scientists don’t know how the ridge formed or why it follows the equator almost perfectly. One theory suggests that the moon had a ring system early in its life that slowly fell to the surface under the force of gravity, building up a ridge of fallen debris. Other theories involve more complex interactions of material below the surface, but none can adequately explain why the ridge is confined to its location. 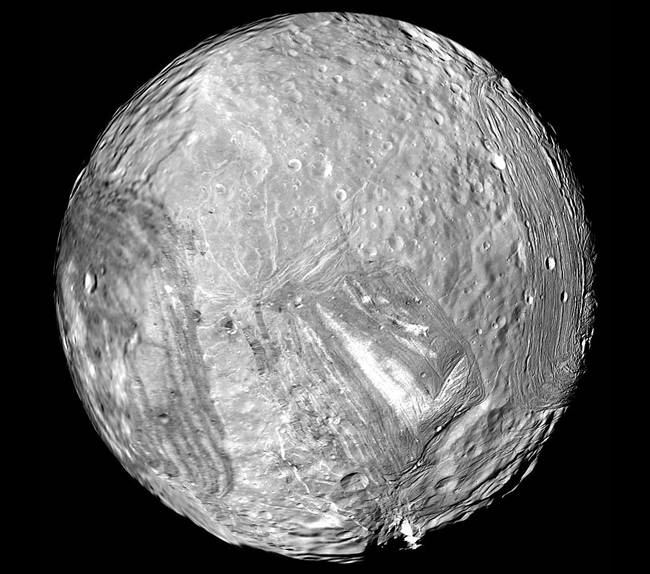 The smallest of Uranus’ five major moons, Miranda looks like a Frankenstein world, stitched together from distinct pieces into some misshapen monstrosity. This patchwork appearance to the moon’s surface suggests intense geological activity in its past that led to broken terrain, huge canyons that crisscross, and large, concentric grooves called “coronae.”

However, at one-seventh the size of Earth’s moon, Miranda is too small to have been tectonically active. So how do we explain all these features?

One belief is that Miranda’s orbit was more oval in the past, resulting in a larger difference between the points at which it is closest and farthest from Uranus. When it is further from Uranus, the planet’s gravity tugs at it less powerfully than when it is closer, leading to tidal flexing that deforms the moon and warms its interior through friction. Another theory is that Miranda – or rather, pre-Frankenstein Miranda – was shattered by a massive impact, and the pieces reassembled into the current, bizarre shape. 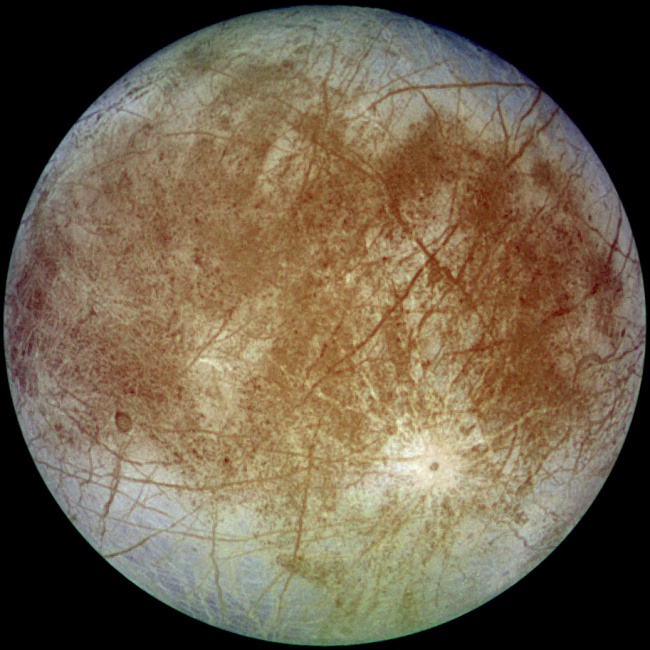 Jupiter’s fourth largest moon, Europa is famous for being covered in water ice – and for the possibility of the liquid ocean that may lie beneath it. But beyond that, its surface is scarred with intersecting lines – cracks and dark streaks that span the entire globe and can reach 20 km in width.

The origin of these lines is unclear, but the most likely hypothesis states that they are the result of warm ice erupting onto the surface, not unlike the way ocean ridges open up on Earth and spew out lava. Once again, tidal flexing is thought to be what is causing the internal heating of the moon. But were that the case, then the lines should be appearing in predictable patterns, and yet only the youngest ones are – the older lines aren’t where they should be.

Why? One theory suggests that Europa’s icy crust is rotating faster than its interior, but ultimately, Europa leaves us with more questions than answers. 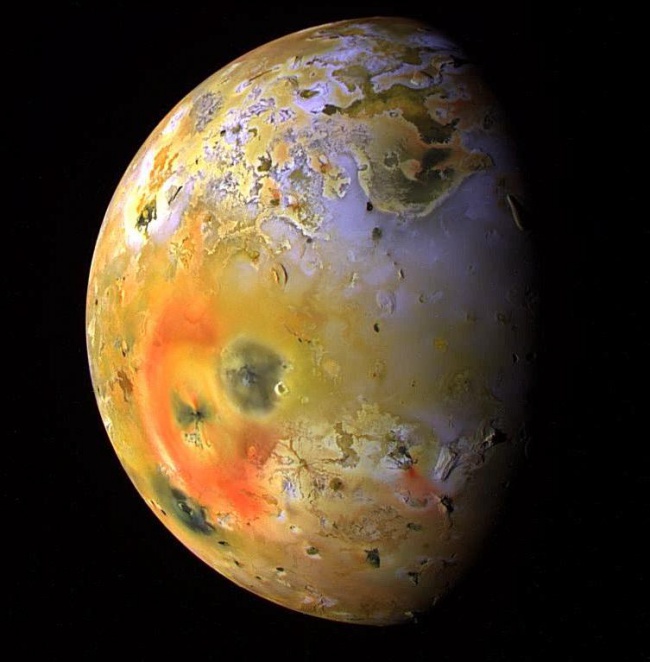 Jupiter’s moon Io, the fourth-largest in the Solar System, has over 400 active volcanoes, making it more geologically active than any other moon or planet known to us. You guessed it – tidal forces are once again responsible for this.

But here’s the problem – scientists have models of Io’s internal heat profile, which show where the moon’s hottest underground spots are, and they don’t match up with the location of the volcanoes. The majority of the moon’s volcanic activity is offset a full 30 to 60 degrees relative to where the models predict it should be.

How do we explain this discrepancy? Well, one possibility is that Io is spinning faster than we believed, but a more sobering one is that the current internal heat models are wrong because we’re missing some key information. The missing puzzle piece may be a hypothetical magma ocean below the surface, but for the time being, this mystery remains unsolved.