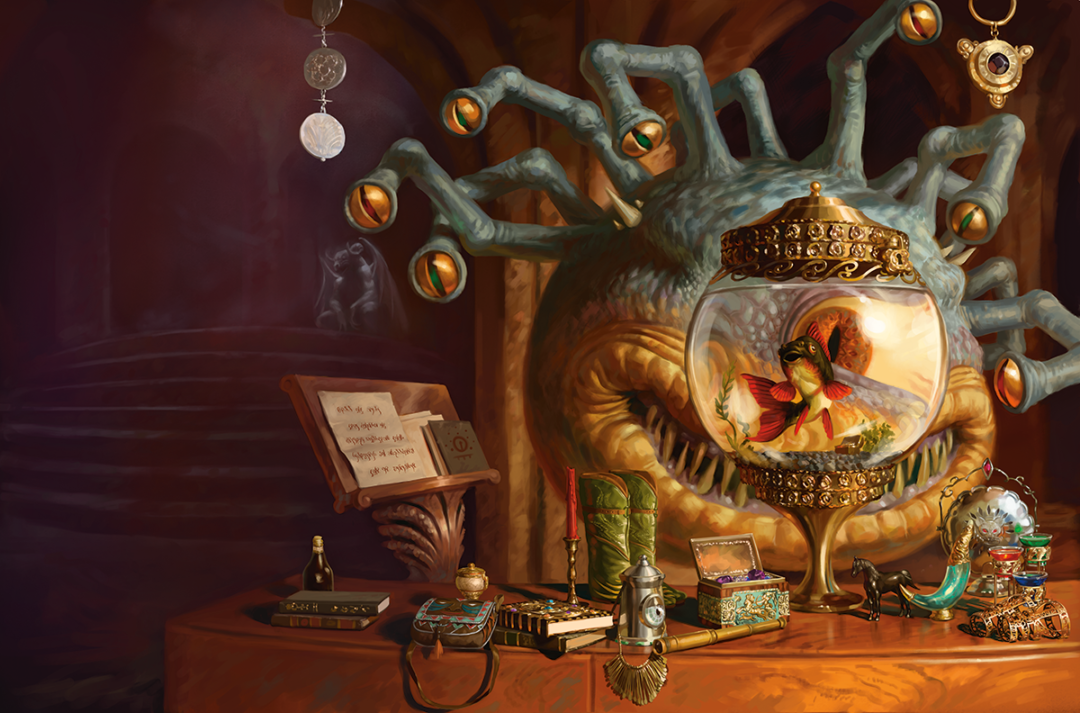 Our party had entered the woods searching for a way to defeat a hag that had all but taken over a nearby town. We’d watched her steal a knight’s soul in broad daylight after he futilely attempted to strike her down. The other witnesses just lined up in hopes of earning the cruel fae’s favor. We were on the lookout for her kin, hoping to slay them and weaken her power by severing the magical links between them. We knew one of them had formed an alliance with the giants that lived in the woods, so we weren’t particularly surprised when our tracker spotted huge footprints accompanied by much smaller ones. We guessed that the giants were working with some goblins.

When our party’s rogue scouted ahead to see what we were dealing with, our Dungeon Master flipped open Mordenkainen’s Tome of Foes to show both him and the rest of us the picture of an ogre howdah, an armored giant carrying a wooden fort on its shoulders populated by goblin archers.

“Well I didn’t see that coming,” he said as we rolled off to see who would go first when the fighting broke out.

I haven’t played Dungeons & Dragons 5th Edition much since its earliest days in 2014. After a few one-shots, I’d found the game pleasant enough, but it didn’t excite me the way D&D 3.5 or Pathfinder did with their abundant character options and enemies. When my husband asked to play D&D on his birthday, one of our best friends agreed to put together a 5th Edition game. I knew he’d tell a good story, but I still wasn’t expecting much from the system.

I was pleasantly surprised to learn that 5th Edition has done a lot to address my early issues. Wizards of the Coast releases only a few new D&D books each year, meaning it still has much less content than previous editions or Pathfinder. But I feel like the game has finally reached a critical mass of options thanks to two recent releases: Mordenkainen’s Tome of Foes and Xanathar’s Guide to Everything. D&D has earned a much wider acceptance recently due to the popularity of actual play podcasts and streaming shows along with Game of Thrones, and Wizards of the Coast could have simply used 5th Edition’s beginner-friendly rules to gently welcome new players. It’s still doing that, but it’s also not abandoning the game’s long, weird, and sometimes controversial history.

D&D’s former publisher TSR released monthly issues of Dragon magazine that contained a variety of gaming-inspired articles. My favorite segment was “Ecology,” a series of in-depth monster descriptions illustrating how they lived and framed as if they were the the work of wizards or other sages presenting their research to their peers within the fantasy world. Mordenkainen’s Tome of Foes follows that legacy. Named for a wizard once played by D&D creator Gary Gygax who has become a fixture of the game with signature spells like “Mordenkainen’s Magnificent Mansion,” the book is presented as the titular wizard’s tales of key conflicts and creatures from the game’s world.

The book opens by chronicling the Blood War, the endless conflict waged between the chaotic demons of the Abyss and orderly legions of the Nine Hells. This was the material that helped get D&D labeled as Satanic when it first came out, and forced the game’s developers to come up with more fanciful names like baatezu and tanar’ri to tone down the controversy. Now they can devote dozens of pages to creating demons as well as the cultists and monsters that serve them with relative impunity.

While the book’s name might make it seem like it’s mostly a resource for Dungeon Masters looking for new enemies to throw at their players, like that fortress-toting ogre howdah, Mordenkainen’s is actually a great resource for players too. A large section of the book is devoted to common character options likes elves, gnomes and dwarves, offering information on their societies that can provide inspiration for backstories along with rules for playing them. I wound up playing an Eladrin, an elf from the fey realm with the ability to teleport that was originally published as a character option in 4th Edition. Of course there are also plenty of monsters ranging from the entirely new to classics like dark elves to deep cuts from previous editions like Giff, spacefaring hippopotamus people that love guns and explosives.

Xanathar’s Guide to Everything is even weirder. Xanathar is a notorious crime lord in D&D’s signature city Waterdeep. He’s also a beholder, a classic D&D monster that’s basically a floating head with a giant toothy maw, one central eye, and a bunch of eyestalks that fire magical rays. The book provides a trove of new character options, many of which draw from previous editions but have been elegantly converted and simplified here. I wound up playing a Divine Soul, a version of sorcerer that gets their power from a connection to a divine being that’s based on the 3.5 class Favored Soul. Another player chose to be a mastermind, a new type of rogue that is a maestro of intrigue and tactics. All of these options are peppered with color commentary from Xanathar that’s often laugh-out-loud funny. “Arrows are the worst,” he writes over a section on archers. “They go much farther than eye rays. That’s why I stay indoors all the time. Besides, the sky is totally overrated.”

Along with new rules, the book also expands on 5th Edition’s obsession with tables. Players are encouraged to roll on a ridiculous number of tables to help develop their characters, though they’re always free to skip a table or ignore a result they don’t like if it’s contrary to their concept or something they previously rolled. For instance I’d picked out a magical mentor for my sorcerer so I opted not to roll on a table about how people viewed her power which was mostly filled with accounts on how you were shunned and feared. But some of the new additions here are delightful. There’s a section on barbarian superstitions where my husband rolled that his character believed that elves can read your minds if you look them in the eye. It took me a surprisingly long time to figure out why he wasn’t making eye contact when we were talking in character. I rolled a sorcerer quirk that caused me to levitate whenever I cast a spell. Another player rolled for connections and wound up being friends with that knight who got killed at the beginning of the session. It’s all optional but provides some quirky flavor and possible hooks for the DM.

We wound up having so much fun with the game that we’ve scheduled a second session. My husband’s also decided to run his own 5th Edition game, taking advantage of the ease of play to allow for a rotating cast. Several of us have already chosen characters based on options in Xanathar’s and I look forward to getting an even better look at how the game has evolved over the past few years and how new content will continue to move it forward.